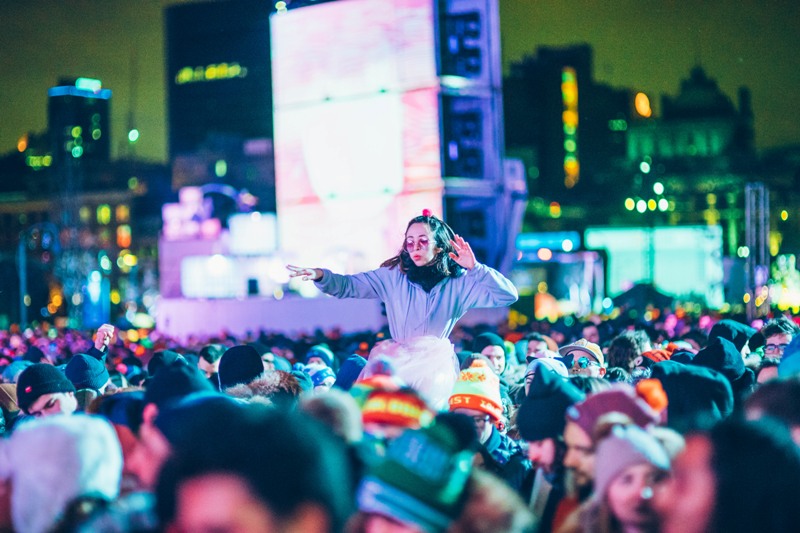 It’s always special when a local act is popular enough to headline a big music festival in their own backyard, like that time Arcade Fire played a big free show at POP or Barr Brothers filled the streets at Jazz Fest.

Right now there’s probably no bigger name in Montreal music than 25-year-old Polaris Music Prize and Juno Award winner Kaytranada, so it’s only fitting that he’ll kick off the 12th edition of Igloofest this Thursday at 7:30 p.m. at the party’s usual digs in the Old Port. That being said, the site has received a little redesign.

His debut album 99.9% is hopefully still in your regular listening rotation, but have you heard some of his latest production work, including his beat on Cassie’s “Don’t Play It Safe” or Craig David’s “Live in the Moment”? Yes, Kaytra is re-shaping the pop game.

The next evening should get the city’s Parisian population out en masse, with Petit Biscuit set to drop some dreamy beats (like the monstrously and inexplicably huge and old “Sunset Lover”) Jan. 19. On that night, two of Montreal’s best DJs, Ouri and Frankie Teardrop, will take over the side stage. A jam-packed week one of Igloofest closes with Montreal favourite Bonobo, along with L.A.’s Tokimonsta, who’s back in form after some serious health troubles.

Also on Saturday is local Jaymie Silk, who just this week dropped a new EP called Watch Me. (There’s also a video for Watch Me, which features members of the city’s vogue and ballroom scene, check it out here.) And if that’s not enough, longtime Bass Drive Wednesday host DJ Vilify returns from current home of Berlin to close the side stage. A front loaded Igloo probably isn’t a bad thing this year, given how nice the weather forecast looks in the coming days. Hey, we’ve all donned our Iglooswag and hit up the site when it’s -20 or in the middle of a blizzard, but it’s nice to be able to enjoy the music with only two to three layers on.

Week two is a little lighter lineup-wise, although it wouldn’t be an Igloo/Piknic cycle without Misstress Barbara, who headlines Saturday, Jan. 27. Dutch DJ Oliver Heldens is also kind of a big deal in certain circles (i.e. New City Gaseous organisms), so make it out Jan. 26 if you’re into that sort of thing. The usually not too trap-happy festival will somewhat defy convention by hosting American NGHTMRE on Jan 25.

One of the most intriguing Igloofest nights goes down at the start of week three, as two of the biggest names behind the scenes of pop and rap will make their Igloo debuts. You might not know DJ Esco’s name, but he’s one of the architects of Atlanta rapper Future’s dirty sprite sound, while Canadian Boi-1da is responsible for some of Drake’s biggest hits (and perhaps most importantly, Rihanna’s “Work.” Will Esco, the self-proclaimed “coolest DJ in the world” tame the mighty musical tundra that is Igloofest? Swing on by Feb. 1 and find out. Either that or cozy up to the side stage for local double shot Lou Phelps and VNCE Carter from Dead Obies.

The fest’s final weekend will also feature faves Sasha and John Digweed on Feb. 2 and a triple serving of big name French producers – Worakls, N’To and Joachim Pastor – to close things out Feb. 3. ■

Igloofest runs from Jan. 18-Feb. 3 at Jacques Cartier Pier in the Old Port. For general admission or VIP ticket information on each night, or for weekend and fest passes, look here.