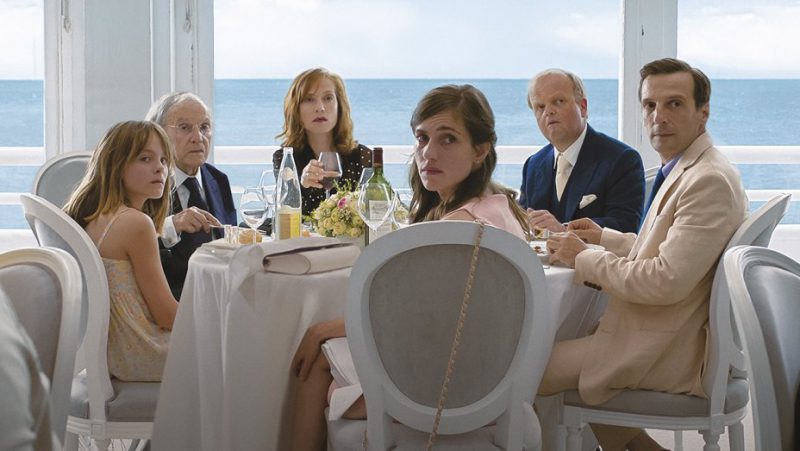 “It’s the destiny of all auteurs to talk about the same thing over and over,” says Michael Haneke.

He’s talking about his new film, Happy End, which touches on many of the themes of his previous films. In fact, it functions as a kind of unofficial or spiritual sequel to Amour, the film about death and old age that stands as perhaps Haneke’s most uplifting film yet. Happy End centres around the Laurents, a well-to-do French family who all live together in a large mansion owned by the patriarch Georges (Jean-Louis Trintignant). Now afflicted with dementia and periodically suicidal, Georges has passed on his construction company to his daughter Anne (Isabelle Huppert), who has to deal with a workplace accident that has claimed the life of an employee who was also a refugee from a Third World country; her hard-drinking son Pierre deals poorly with the fallout. Anne’s brother Thomas (Mathieu Kassovitz) welcomes his teenage daughter Eve (Fantine Harduin) back into his life, only to find that she has discovered his sadomasochistic extramarital relationship.

“It’s not a film about capitalism — it’s a film about the so-called First World,” says Haneke. “It’s about rich countries and the way they interact with Third World countries. We’re all relatively at ease — we’re kept away from real misery, we’re not hungry… Even the proletariat that existed at the beginning of the 20th century is gone. Now, that proletariat is immigrants. We’re very spoiled, we feel very good, but we’re all bourgeois. Some have more money, some have less, but the grande bourgeoisie no longer exists. Corporations are the bourgeoisie now.”

Happy End is a film about privilege and the malaise of modern life. Its characters are self-absorbed and seemingly incapable of empathy. Looking at Haneke’s films, it would be easy to categorize him as cynical, or a pessimist — which he denies.

“I’m not a pessimist. If I were a pessimist, I would be making films of distraction,” he says. “I would think people are so dumb that it’s not even worth discussing serious matters. (…) I grew up after the war, and everyone was thinking, ‘This is our chance. Everything will get better.’ We want to recreate our lives as they were before; we were full of optimism about rebuilding. These days, I don’t feel like it’s quite the same now. (laughs) It’s not about my own pessimism, it’s about observing the world around me.”

A driving force of Happy End is social media, particularly a Snapchat-like application through which many of the Eve scenes unfold. Images and the ways they are broadcast have always been a staple of Haneke’s films (particularly Benny’s Video and Caché), but the move towards social media was an inevitability for the 75-year-old director.

“It just keeps expanding,” says Haneke. “Every day there’s a new invention. It develops so quickly that we all end up kind of lost. It’s the biggest change in the history of the world, social media. It changed our lives in a way that was unprecedented. When they invented the printing press, it still took 100 years to become widespread. In the last 10 years, everything changed. It’s extraordinary.”

Haneke himself, you probably won’t be surprised to learn, isn’t particularly into social media.

“I use them to keep abreast of what’s going on, but I don’t really use them. In the course of making this film, I used them as research to find out how young people used them and how they worked. But I think that you can’t tell stories about our current society without also talking about social media. It dominates us and dominates our lives.

“The problem is with the media in general, and it dates from before the internet,” says Haneke. “Take TV, for example. It gave us the impression that we were informed, but what did we see? What did we learn? We saw pictures and video footage with comments from a journalist who was somewhere, had an opinion about something that he filmed and showed it to us. What he was showing us was his opinion. It was what he believed about what we saw. That means everything we see — everything we think we know — is second or third-hand information. I don’t know anything about life! (laughs)

“The only thing that I know to believe from television is the weather. The weather is scientific, more or less. If it says it might rain tomorrow, we can be fairly sure that it might rain tomorrow. The great danger with media is that… this is always the example that I will give: A villager living on a mountain somewhere — 100 years ago, he knew his village, he knew the mountains and he knew his immediate surroundings. Maybe once a year, he goes to the bigger village next door. That’s his universe; it’s what he knows. This same guy, today, he still lives in the same village. But he has a TV and a computer. He sees everything, and he thinks he knows everything. But he doesn’t know any more than he knew 100 years ago. We only know the things we interact with. Everything else is an illusion. It’s dangerous to think we’re informed when we aren’t. It’s dangerous because it opens it up to manipulators to start directing people’s thoughts and feelings to their own gain. Before social media, a choice like Trump would have been impossible. That’s the great danger, but we have to live with it. We have to figure out how to manage it properly, and it changes practically every hour! Everyone is overwhelmed. But it’s not pessimism — it’s realism.” ■