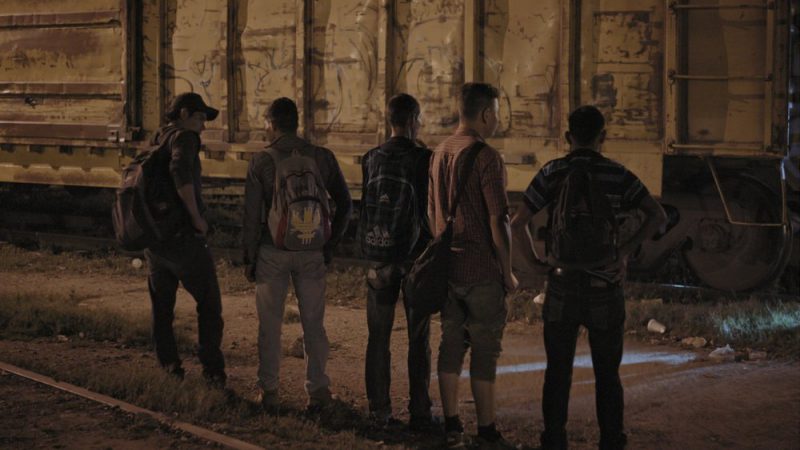 “I wanted to show what it was like to migrate, the rhythm of exhaustion,” explains, about his new film Destierros. The documentary follows the lives of migrants travelling through Mexico from Honduras and Guatemala as they head to the United States and Canada. Shot in 2016 and edited through 2017, it is a film of the moment. Around the edges of the frame, peeking in now and then, the election of Donald Trump and his promise to build an enormous border wall casts a shadow on the migrants’ journey. Just yesterday the American president reaffirmed his commitment to “the wall,” which he still insists Mexico will pay for.

Hubert Caron-Guay had a clear vision of what he wanted to do with his film, creating a unique “Dispositif” in the presentation of the migrant experience. Together, we looked up the word to see if we could find an equivalent in English. We came up with “technical device,” but it doesn’t seem to do justice to the term. Rather than do a traditional talking head or observational film, Caron-Guay used light, darkness and sound to recreate the endless nights travelling far from home towards an uncertain destination.

At the Bar Salon at the Cinémathèque Québecoise, I sat down with Hubert Caron-Guay to discuss the film.

Justine Smith: The film opens with a very striking shot of a migrant moving through the dark woods, lit only by a flashlight from behind. Why did you want to open the film with this image?

JS: All the interviews are shot in a dark room with just a spotlight on the subjects’ faces. Why did you choose to do this?

HCG: It is artificial, created at the shelters. We had a little black room and we put mattresses on every wall to make sure the noise of the environment won’t affect the shooting. We wanted to create discomfort through the opacity of the darkness around their faces. I wanted it to be very focused on the migrants’ voices.

JS: You were shooting in the shelters, in Mexico; how cooperative were they in the project?

HCG: In the first shelter at Tenosique, Tabasco, I had been there as a volunteer in 2014. I already had a relationship with them and when I came back, they asked precisely what I was going to do because they wanted to protect the migrants. Some people accept to be shown on camera but they don’t always know the real consequences of what can happen if they do. I asked the shelter for help in how to do this the right way and how to best protect the migrants. I know I have good intentions, but that is not always enough. I had them watch me and make sure I didn’t go to far. But basically they were very cooperative because they wanted to talk about this situation.

The most difficult part was to have women to interview. Some of them have been raped and now they are in a secure space. I had to explain that they would be in a black box with two men and asked if that would be okay. You have to make sure the woman can be near the door if that makes her more comfortable. It is difficult because there are a lot of women trying to cross from Honduras and Guatemala to the United States, we know a lot about the men, but the path of the women is often invisible.

JS: Did the election of Donald Trump affect the film in any way?

HCG: Some of the people had heard about Donald Trump saying he was going to build a wall. There already is a wall, so they thought that he would build an even bigger wall that would be impossible to cross. There was a mass of people trying to cross before any of that happens, but I thought it was impossible to be elected, but you know, he’s a “winner.” (Hubert laughs)

A lot of the people in the film were unsure if Trump would do what he said. One man who speaks in the film thinks it will only lead to problems for the United States because the migrants are cheap workers. We thought it was important to keep the information about the migrants and their perspective on the wall and the United States but we didn’t change our direction that much after he was elected.

JS: It is interesting that they all seem to have realistic expectations of what life will be like in America. They don’t have illusions that it will be easy.

HCG: It is very difficult to keep being invisible when you arrive in the United State and the only way to be safe is to go to a sanctuary city. If they don’t know life will be hard, they don’t care. There is no way they can stay at home, it is not a choice. Sometimes it is for economic reasons but it all comes down to violence. Some people live on the countryside but don’t want to go to town because in town there are a lot of gangs. You might make more money but gangs take half of what you earn. If you don’t have enough money, you can face a lot of aggression.

JS: Why was it important for you to make a movie about migration?

HCG: We have heard a lot about what has been happening in Europe but we seem not to be aware of what is happening so close to us. There is migration here and it may be worse. If it was a war that caused the migrant crisis in Europe, there is a war here too and we are not doing anything or maybe we don’t care.

I watched a lot of movies about migration, to see how they were made. A lot of them feature people speaking for the migrants and I couldn’t understand why. In the beginning I assumed they did not want to speak, because that’s what I saw in the movies, but that was not the case. I wanted to make sure this was their story, as close to what they were living but not interfering too much. When we were with the migrants with our cameras, we were not migrants, but we wanted to be close to them, we wanted to hear their voices. We wanted to be immersed in their situation to show the stress, the trauma and all the difficulties they have to cross to reach the American Dream.

JS: Have you kept in touch with any of the film’s subjects?

HCG: We did 35 interviews and they did not all make it into the film. I have information on some who are not in the movie. Sometimes they are deported and they send me a message that they are trying to get back to the United States. I ask to keep in touch on the journey. Sometimes they message me where they are, what they are feeling. When I have the opportunity to make that connection, I do it so they don’t have to be alone.

No One Is Illegal Montreal