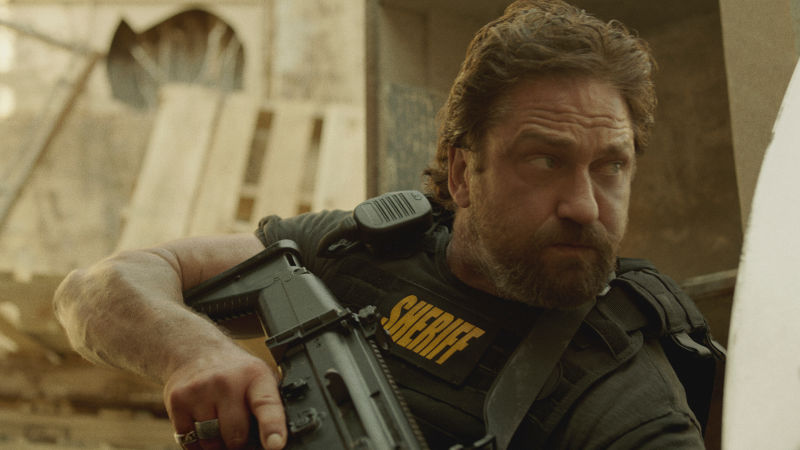 Gerard Butler in Den of Thieves

It is being released in January, which is traditionally seen as a dumping ground for movies that studios do not have any faith in whatsoever.

It stars Gerard Butler and 50 Cent, two actors who, while prolific, have appeared in a great many movies that the studio either dumped in January or the straight to the VOD market.

It is the directorial debut of Christian Gudegast, a screenwriter who has two major credits to his name: A Man Apart, a movie starring Vin Diesel that was not part of a franchise and is therefore more or less forgotten (I haven’t seen it) and London Has Fallen, a movie that was abjectly terrible to the point where it would have surprised no one if it came out straight to VOD. It stars Gerard Butler.

Den of Thieves is well over two hours long while most crime movies with a cast of this calibre try to get in and out as quickly as possible. Most movies where 50 Cent robs a bank or performs some other kind of heist (often with or against Bruce Willis) barely pass 90 minutes.

If only one of these facts applied to Den of Thieves, it would already be in trouble. There is no reason imaginable that suggests that this movie could be good. All of the odds are stacked against it. That’s before you figure out that it’s also, essentially, a pared-down version of Michael Mann’s Heat — a roving Los Angeles crime fresco that takes its sweet time and blows out the perceived limits of the cops-and-robbers saga. Den of Thieves is kind of that, too, but operating at a much lower frequency. If Heat is the Who’s Tommy, Den of Thieves is the Pickwick compilation of the Who’s Tommy as performed by a faceless group of studio musicians who recreate the beats of the thing without putting much heart into it.

The thing about those half-assed Pickwick exploito records is that if you didn’t actually know the original (or the original artist that they’re trying to ape with a soundalike original), you might be duped into thinking it’s not bad at all. Den of Thieves is a lot like that, too — it has no real reason to exist in a world where Heat already exists, but if you take it as it is, it’s a surprisingly enjoyable facsimile of a thing (albeit one that no one asked for).

Gerard Butler stars as Big Nick Flanagan, a rough-and-tumble LAPD detective who’s always out getting drunk and punching people and showing up to crime scenes hungover in a leather blazer that probably smells like tequila and Oliver Reed. That’s certainly the state he finds himself in when he’s called in to a crime scene in the parking lot of a donut shop that sees many cops and one baddie dead. Perplexingly, the truck the robbers hit (and drove away with) was completely empty — so what could they possibly want with an empty armored truck? What they (50 Cent, Evan Jackson, Pablo Schreiber and O’Shea Jackson) want to do is rob the friggin’ Federal Reserve Bank in downtown L.A., an extremely protected building that has never been successfully robbed in the history of time. With Big Nick on their tail, they devise a seemingly foolproof plan that nevertheless gets more complicated each step of the way.

Considering that this is about as straightforward a heist plot as there is, there’s absolutely no reason for Gudegast to devote something like 135 minutes to its inevitable cat-and-mouse chase. Though the film takes its sweet-ass time putting every chess piece on the board, it’s surprisingly low on the character development. Big Nick’s ongoing divorce from his wife (Dawn Olivieri) is handled with passing disinterest — unfortunate, since she’s about the only non-stripper female character in the movie — even if it’s just about the only personality trait he has that isn’t made immediately obvious by the fact that he looks like he rolls under a food truck every night in lieu of having a home.

Similarly, our four thieves barely have a personality at all. We’re told that Schreiber and 50 Cent’s characters used to be play football together, and they all have varying levels of outward aggression, but mostly they seem concerned with laying out the nitty-gritty of a bank heist over two hours.

When Den of Thieves actually manages to severely surpass expectations is in its attention to detail. Few movies spend this much time ironing out every minute detail of its central heist (in fact I’m pretty sure that 50 Cent is in a couple that don’t at all); it actually manages to spend a lot of time carefully building a central heist sequence that more or less works from top to bottom. More importantly, Den of Thieves has a very healthy sense of its own limitations for a movie that is explicitly aping the most freewheeling heist movie of the ’90s. So many movies of the same ilk as Den of Thieves bite off more than they can chew and leave the viewer watching the half-digested food dribble into their beard — Den of Thieves stays relatively grounded and plays its cards close to the vest… at least until an ending that borrows directly from another unavoidable ’90s standard, The Usual Suspects.

Ultimately, Den of Thieves proves to be little more than a passable distraction. It never really transcends its own dogged competence, and it offers little else than better-than-expected take on the familiar. In the grand scheme of things, that isn’t much – but in the midst of a collective oeuvre that includes London Has Fallen, Blood Out, Gun, Setup, Geostorm and (almost certainly) countless embryonic turds, Den of Thieves’ muscular mediocrity is a triumph. If nothing else, it will succeed in making you want to rewatch Heat — which is exactly what I did. ■

Den of Thieves opens in theatres on Friday, Jan. 19. Watch the trailer here: