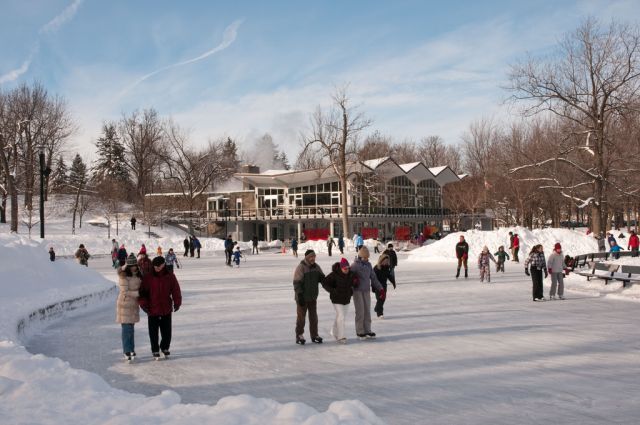 The decision by the city of Montreal to permanently close Mount Royal’s Beaver Lake to skating has led many a patineur to spit out their hot chocolate as the 87-year tradition drew to an abrupt close this week.

A combination of climate change and physical changes to the lake made it risky for workers, the city decided, after the ice broke under a maintenance vehicle last winter. That wasn’t a huge problem in the past, when the lake was just one-metre deep, but after $16.5-million in renovations to solve a problem of excessive vegetation, the lake bed is now more than six metres deep, executive committee member Luc Ferrandez, who is responsible for major parks, explained to Le Devoir.

“We can’t take the risk of someone or a truck falling through the ice during a thaw,” he said. With the possible consequences of an accident going from soaker to croaker, the city decided to look for another nearby location for a large natural ice surface. For now, the mountain-skating public will have to settle for the much smaller refrigerated rink built in 2006, but Ferrandez says he hopes to have a replacement site ready for next winter.

When I was growing up in  Dollard des Ormeaux, our local park boasted at least four outdoor hockey rinks (my child memory says six) and another for skaters. Arenas were few and far between in those days and hundreds of kids enrolled in the popular “house leagues” would crowd the outdoor ice surfaces every night and most weekends. City workers did most of the maintenance, but it wasn’t uncommon for the kids to pitch in between games — sometimes in mid-period — to clear the snow.

The fleet of outdoor rinks and the cheap house-league fees made hockey affordable for most families. Communal goalie equipment was even provided to whichever kid drew the short straw (me!).

If you admire soccer parents, you’d have to worship hockey parents of that era, who spent much less time driving and much more time shivering than the modern version. No heated bleachers, no casse-croûte fries, just standing in snow banks, cheering on the kids until you were literally blue in the face.

Even then, though, outdoor skating enthusiasts were at the mercy of the weather. Rare were the seasons where you didn’t lose five, six or 10 games to rain, snow or thaw. Eventually, reliability won out over affordability, and the kids with the talent and the parents who could afford it moved indoors; the shrinking number of outdoor rinks began to serve a equally shrinking corp of all-ages, all-gender pick-up hockey players.

I used to be an ice farmer. At least that’s what I called myself for eight winters, after the 1998 ice storm made me realize our backyard was perfect for an outdoor rink. After literally skating around the house that January, I was inspired to build my first rink the next winter, using odd scraps of plywood for boards, snowshoes to tamp down the foundation and a sprinkler to slowly “grow” my first crop of ice. I watched the weather channel religiously and finally understood why my partner’s farm-owning brother couldn’t talk about anything else. The labour of love grew in size (100-by-40 feet) and sophistication in the ensuing years, as did the number of friends and neighbours who came by, day and night, for joyful games of shinny. My niece Bailey, who had learned to skate on that rink at the age of four, would bring her entire team there to party a few years later and, I’m proud to say, would quickly go on to become a much better player than I ever was.

The rink foundered on the shoals of my relationship at the time, but I was reminded of it two winters ago when I noticed the tell-tale signs of rinkmanship in the backyard of one of my Verdun neighbours. I recognized the nightly spraying ritual, heard the scrape of shovels after a storm, heard the familiar slap of pucks against the boards and cries of glee from the kids and their cousins.

Alas, despite the enormous effort of my neighbours, Hockey Night in Verdun was a rare event as the work of many days would often disappear after a mild thaw. Commiserating with the husband one mild February day, he reluctantly told me that the tradition might die in Year One. Even the city rinks were struggling against nature, including the refrigerated surface the Canadiens hockey team had built beside Verdun City Hall.

Les Amis de la Montagne were surprised and upset that the city is going ahead with the closure, which they had hoped could be avoided. Spokesperson Hélène Panaïoti noted that the nearby pavilion was built to serve skaters and reminded Le Devoir that “we can still skate on large bodies of water throughout Quebec and Canada.”

True, but the Rideau Canal, for example, saw its season cut to just five weeks for the last two winters and was only open for 50 to 75 percent of that time (25 days last winter, just 18 in 2015-16). This year it only opened January 5 and despite the “polar vortex,” parts were closed just five days later and only re-opened in full on January 18. The closings occur primarily for safety reasons, but also because even brief thaws can turn the ice into slush that thwarts skaters who, in any case, would only score and pockmark the surface.

Tradition is wonderful, but no matter how deep one’s nostalgia for winters past, the ice on Beaver Lake is no more able to resist climate change than the ice shelves of the Antarctic. Since the risk of breaking through the ice on Beaver Lake now poses a real threat of drowning, and not just a soaked pair of snow pants,  the city has no choice but to put the safety of workers and users first.

But the fledgling Plante administration needs to do a better job of incorporating user groups like les Amis de la Montagne into its final decisions about the future of public spaces. For a party that campaigned on transparency, the Beaver Lake file shows that it, too, is skating on thin ice. ■