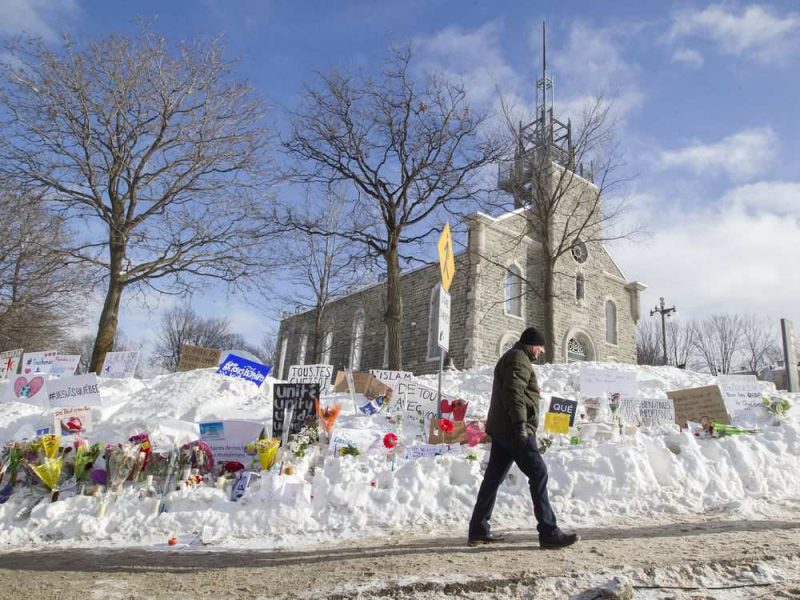 A man walks past the memorial in Quebec City

Never mind that Islam is the religion that Muslims follow; in their minds, the word Islam is associated with religious extremism and terrorism. It’s similar, I guess, to hating sin but loving the sinner.

That’s why the parties refused to accept the proposal of the National Council of Canadian Muslims that January 29 — the anniversary of the assassination of six Muslim men at prayer in their Quebec City mosque last winter — be recognized as the National Day of Remembrance and Action on Islamophobia.

The term Islamophobia is too “controversial” (chargé), said the PQ’s Agnès Maltais. She notes that the head of one of Quebec’s anti-Islamophobia groups is Adil Charkaoui, whom she hates/fears so much that she told Radio-Canada she couldn’t say what she really thought of him without the protection of her Parliamentary immunity.

So we can’t use the word “Islamophobia” because a fringe leader who Maltais doesn’t like uses it in the name of a group he created?

In an interview with La Presse, a spokesperson for PQ leader Jean-François Lisée said the term Islamophobic was “permanently” damaged, thus the party preferred “anti-Muslim sentiment.”

I dunno. The National Day of Remembrance and Action on Anti-Muslim Sentiment has kind of a strange ring to it, more of an invitation to have a nice nap or a cup of tea rather than complaining about the smell of curry in the apartment hallway than a call to action against overt hatred.

The federal Conservative Party has its head even farther up its ass on the issue — tossing a few gallons of water in the whine by proposing a motion that the day be declared the National Day of Solidarity with Victims of Anti-religious Bigotry and Violence.

Which is a little like suggesting we mark the anniversary of the Polytechnique massacre by combatting discrimination against engineers.

What about the first party, you know, the one that governs the province? As usual, the Liberals have found a fence post and rammed it so far up their butts that virtually no one knows where they stand. Same goes for Justin Trudeau’s Liberals, though the Libs and the NDP voted in favour of a motion condemning Islamophobia and religious discrimination in March.

What the PQ and the CAQ are really afraid of is that the term Islamophobic could apply to them and their base. With policies aimed squarely at eliminating any forms of religious expression in the public service — or while receiving public services — the targets are almost exclusively practitioners of non-Christian religions: Jews, Sikhs and Muslims. The biggest “offenders” are of course fundamentalist Muslim (and Jewish) sects that require women to wear clothing that obscures or masks their faces.

Islamophobic? Well, the element of fear certainly seems to be there. The handful of Quebec women (no one seems to know how many, but it’s likely less than 100) who shroud themselves in controversial niqabs or burqas have created more fear and furor than 1,000 Hollywood celebrities in black ball gowns.

Discriminating against these women, depriving them of access to public services, is widely supported in Quebec. Is that Islamophobic? Maybe. But it’s certainly not an anti-Muslim sentiment, the argument goes, since even many Muslims oppose the wearing of the niqab.

The groups that support the call for a national day of action don’t believe that Quebec or Canadian society is widely or inherently Islamophobic. Mahedine Djamai, the communications director of the mosque where the clearly Islamophobic murders took place, told Vice that “we’re a little surprised that they’re mixing up things, that they’re saying being against Islamophobia is the same as saying that Quebecers are racist.”

Djamai pointed to the widespread horror and gestures of solidarity in the wake of the attack as evidence that Quebecers as a whole are open and welcoming.

But anyone who has followed the rise of right-wing movements like la Meute in Quebec, or who watched a major TV chain feed a false controversy over a mosque’s supposed attempt to bar female workers from a neighbouring construction site, can’t deny that anti-Muslim sentiment is easily stirred up here.

For at least two of Quebec’s major political parties, however, admitting the existence of Islamophobia seems to strike more fear in their hearts than any “anti-Muslim sentiment” itself. ■