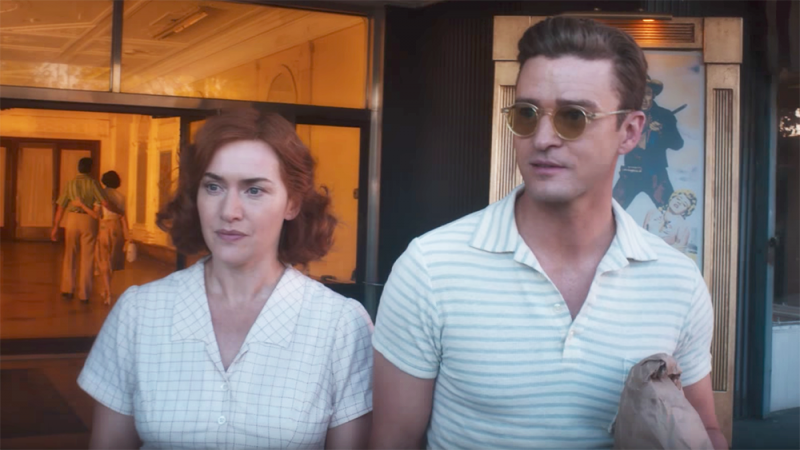 Woody Allen has had a Woody stand-in in all of his movies. Sometimes it’s blindingly obvious, other times it’s more subtle. Truth be told, in some films it seems almost accidental, as if the surrogates simply become surrogates by force of habit. The audience makes its own connections between what we know of Allen and his voice (particularly those films he also starred in) and what we see on-screen. Looking for the Woody Allen surrogate becomes habitual — even in his terrible movies, or the ones that would most benefit from his voice being minimized — but it took me a while to figure it out while watching Wonder Wheel.

Wonder Wheel sees Allen working in a Tennessee Williams/Eugene O’Neill mode (one that he’s already explored at least once in Blue Jasmine), focusing on the sad, somewhat pathetic lives of the working class. Set in the early 1950s, it centres on Ginny (Kate Winslet), a former actress turned waitress living in the shadows (or, more accurately, the neon reflections) of Coney Island. Her schlubby husband Humpty (Jim Belushi) works as a carnival ride operator and pines for the bottle that is so cruelly withheld from him due to his raging alcoholism and violent temper.

Humpty’s grown daughter Carolina (Juno Temple) returns in a huff one day, running away from the gangster boyfriend she married some years back; Humpty never accepted the marriage and essentially disowned Carolina, but he welcomes her back into his home nonetheless. Ginny, on the other hand, grows increasingly discontented with her home life and falls into the arm of a handsome young playwriting lifeguard, Mickey (Justin Timberlake). Though Mickey is definitely taken with Ginny, things get complicated when he first lays eyes on Carolina — a love triangle that will soon send the already fragile, frazzled Ginny into a tailspin.

There’s already been a lot of chatter about the so-called incestuous tones of the story. It certainly is uncomfortable that Allen even made a movie that revolves around the seduction of stepdaughters in any respect, but for that theory to hold water, you’d have to assume that Ginny is the Woody surrogate, but she isn’t — Mickey is. In a movie that has both a schlubby dude that everyone hates who dotes too much on his daughter and a woman past her prime who is willing to go to great lengths to preserve some semblance of youth and relevance, disgraced octogenarian filmmaker Woody Allen identifies most closely with the tan, handsome lifeguard who waxes poetic about great American dramatists and is put in the very relatable position of having to choose between Kate Winslet and Juno Temple.

I’ve liked some of Allen’s films from the last decade, but he’s entered a mode here that I can only describe as smug. (It’s an affliction shared by at least Irrational Man and Café Society, though if I remembered Magic in the Moonlight better I’d be able to tell you.) By asking us to view the entire movie through Mickey’s eyes (he’s the only character who narrates, which he does by breaking the fourth wall and speaking directly to the audience), he places us conveniently above these pathetic, broken working-class schmoes. Mickey stands to lose very little in the grand scheme of things and yet everyone else comes off like a histrionic caricature of the kind of people Allen has apparently never seen outside of the plays the Mickey character loves so much.

That having been said, Wonder Wheel is certainly one of Allen’s most idiosyncratically photographed films. Though a lot of the scenes have a fairly stagebound feel, Allen and director of photography Vittorio Storaro lean heavily on the neon-strewn, Technicolor setting of Coney Island to give his film a particularly dramatic look. Depending on the time of day, different colours of neon lights filter into their apartment, resulting in a deliberately heightened and unnatural look that recalls Storaro’s own work on Francis Ford Coppola’s One From the Heart. It makes Wonder Wheel uncommonly gorgeous to look at, even if the film eventually falters completely under the weight of its pretensions and its overreaching, overripe machinations.

Relatability has never been a particular high priority in most of Allen’s films, but here it just seems like he’s aping something he’s seen without really understanding it. Allen spent the apex of his commercial viability as a filmmaker waffling between comedies and impenetrable, “difficult” homages to Bergman that purposely stifled the Allen-esque voice that many had come to love and expect from his films. He’s now spending the roughest, least commercially and publicly viable portion of his career making these deliberately uncharacteristic, weirdly unrelatable plastic pastiches of classic filmmaking and theatre. Both are rough-going, but at least he knew what he was doing with the Bergman stuff. Wonder Wheel is, at its very best, clumsy pastiche. ■