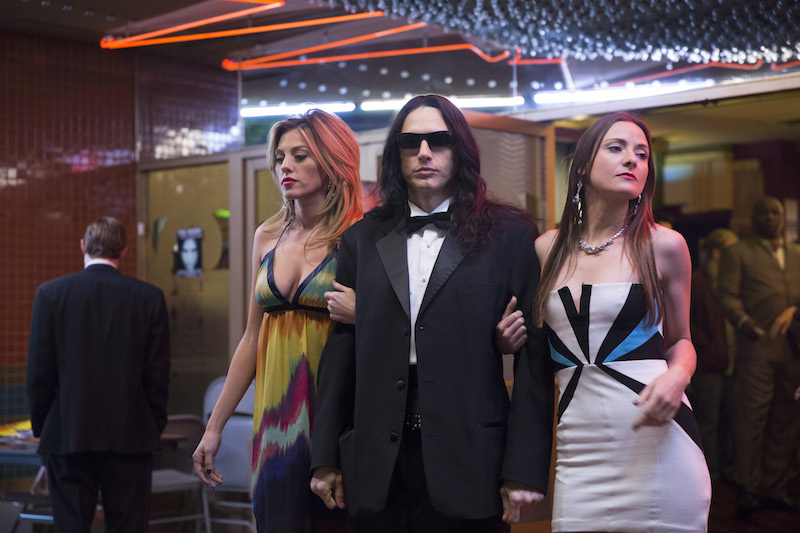 When I sat down to do interviews for James Franco’s The Disaster Artist at TIFF, I was told that Franco was running late and that he would just “slide into” our interview alongside some of the film’s stars: Dave Franco, Ari Graynor and Paul Scheer. He never showed up.

It was probably just scheduling issues, but one could also choose to see this as a metaphor for the way Franco essentially disappears into The Disaster Artist, a “biopic” of sorts for the perpetually mysterious Tommy Wiseau. Franco plays Wiseau, a man of indeterminate age and origin who befriends starving actor Greg Sestero (Dave Franco) in an acting class. Both are chasing acting dreams that far outclass their actual acting talent, but Wiseau’s blind ambition also comes with an added bonus: a seemingly endless source of unexplained wealth that allows him to fund a motion picture starring himself and Sestero in the lead roles. The final product, The Room, is widely considered to be one of the “worst” movies ever made.

Though the original film is a truly singular experience in itself, Franco and the team behind The Disaster Artist (which was produced in part by Seth Rogen — who also stars — and counts Alison Brie, Hannibal Buress, Josh Hutcherson, Jacki Weaver, Zac Efron, Nathan Fielder, Sharon Stone and countless others amongst its cast) go to great lengths to recreate every awkward, indescribably tone-deaf moment present in the original film, and create its own. The stars are adamant: previous knowledge of The Room is certainly going to colour your experience, but it’s not absolutely necessary.

“The interesting thing about The Room is that it’s kind of like a drug, right?” says Scheer, who plays the film’s director of photography. “It starts out with, ‘Hey, have you heard of this thing?’ ‘Oh, no, I haven’t seen it! Let’s watch it.’ So you end up watching it with friends who have probably already seen it. And, at first, it’s weird. ‘What am I watching?! Let’s turn it off.’ And then you get into it, and as soon as you’re done watching The Room, your immediate reaction will be ‘I want to share this with somebody else.’ It’s something that you need to tell the world about, but one of the things that wasn’t known about this movie was how it was made. That’s where Greg comes in.”

“The story of how it was made is a very relatable story of two guys who are going after their dreams and not taking no for an answer,” says Dave Franco. “We wanted to really lean into that because the challenge from the beginning was ‘How do we get people interested in this movie that have never even heard of The Room?’ so we had to lay that universal story underneath.”

“Within the specificity comes the universal,” continues Graynor, who plays Juliette Danielle, the actress playing the main character of Lisa in The Room. (The Disaster Artist is not that hard to follow but it is a nightmare to write about cohesively — especially when you consider that a couple of Francos share the lead.) “I’d heard about The Room for years, but I hadn’t seen it until James texted me about being in it. I watched it alone in my apartment, and I just was screaming by myself and latching on to imaginary arms, thinking ‘Can you believe this?!’ I wondered when we were doing this how it would be for people who don’t know anything about The Room, but watching I realized: it doesn’t matter one bit if you’re unfamiliar with The Room, because it’s ultimately a behind-the-scenes look at the fulfillment of so many people’s dreams.”

It’s not that the elder Franco is exactly unrecognizable in the role, but his dedication is so intense that he begins to blur the lines between Wiseau and Franco. Perhaps unsurprisingly, Franco directed the entire film in character.

“Working with my brother was really fun and equally weird,” says Dave. “He stayed in character the whole time, so it was essentially like we were being directed by Tommy Wiseau. That’s something that you get used to after a few days — or at least adjust… but then there were so many cameos in the movie and roles where people would just pop in for one day that you had to kind of prep them and let them know that they’re not gonna be directed by James Franco today. It’s a hard concept to wrap your head around.”

“We very meticulously recreated the scenes from The Room,” says Graynor. “It was both the wildest, funniest, hardest, most awkward thing I’ve maybe ever done in my career, because we took it so seriously. We all revere this movie and wanted to honour it, and I think it was such a specific acting challenge. It’s not just doing bad acting, it’s trying to match the rhythm of this movie that makes no sense. You’re in these sets where you’re literally walking into The Room, and we’d be studying the iPad with these clips harder than we’d be studying for the SATs or something just to get the moves right. That was one of the most fun and challenging things I’ve ever done.”

“The takeaways for me are: you have to put passion in what you’re doing, and your sense of expectation is always probably gonna be off, somehow,” says Graynor. “It’s not gonna be like that, and it’s not gonna happen like that either. With The Room, to see the journey that that has gone on from when it first got played in the theatre that Tommy paid for to have it out there to qualify for the Academy Awards to slowly finding this audience to then becoming a worldwide midnight cult hit to now, 14 or 15 years later, being at one of the greatest film festivals in the world, talking very seriously about this film that they made — you never know what is going to happen.”

“I think the one thing to take away from this movie is collaboration,” says Scheer. “Tommy didn’t collaborate. Here, you have someone that’s so singularly focused and not listening to the other people around — from the DP to the actors to anyone. Film is a collaborative medium and I think that the one lesson learned is: don’t get so full of yourself and of your vision that you don’t ask for other people’s help, because I think when you see something fall apart, it’s often because one person was like, ‘No, no, no, I know better than everybody else.’ You have to stop and listen and tell yourself that maybe they are right about this.”

“But then if he had listened to people, this version of the movie might never exist,” says Graynor.

The Disaster Artist opens in theatres on Friday, Dec. 8.