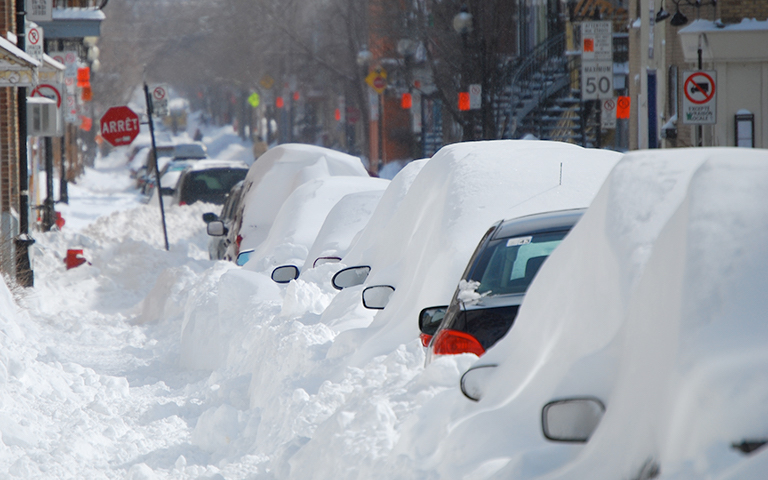 In a statement released via its official Twitter account, the city of Montreal has announced significant progress on snow removal efforts less than a week after the first major snowfall of the season.

“We are pleased to inform Montrealers that this is projected to be the most efficient performance in our city’s history,” reads the press release. “As such, we can confidently anticipate that the full clearing of our sidewalks and roads will coincide with the Second Coming of Christ.”

The press release goes on to explain that while operations are going more smoothly than usual, a precise time frame for completion has not been established.

“While having functional streets — and our Heavenly Messiah strolling freely down them — will be miraculous, like all miracles, snow removal in Montreal takes time,” it states. “And just as the exact day and hour of the Lord’s glorious return to Earth is unknown even to himself, the city doesn’t have an exact estimate for getting all this slush out of here.”

The statement also acknowledges the city’s past failings when it comes to snow removal, as well as a number of winter hiccups this year.

“We recognize that Montrealers have been frustrated in the past by things like parking tickets, blocked driveways, destroyed property and bald-faced fuckery,” says the city. “Not to mention the DIY snow tires on our city buses this year- though in our defence, they looked functional as hell on Pinterest. We can only hope our citizens will understand that a bus wrapped around a pole is merely a micro-apocalyptic precursor for Jesus’s sweet return to Earth, and — spoiler alert — we’re pretty sure the Bible mentions the King of Angels bringing road salt.”

Some locals are skeptical about whether the Lamb of God — or a clear path to the dépanneur — will ever reappear.

“I’m not a religious man,” said Charles, 43. “But I guess it’s possible the Son of Mary will emerge from the clouds atop a white horse to fulfill his prophecies, raise the righteous dead and destroy the wicked,” he went on. “I just don’t think it’s realistic that Jesus would have the bureaucratic clout to deploy a fleet of sidewalk plows in St-Henri.”

Others are more hopeful.

“The cool thing about the End of Days is that even if the city doesn’t get everything done by then, I won’t have to worry about street parking since I’ll be ascending to the Heavens anyway,” said Veronique, 30. “I just hope Christ arrives before we get an ice storm.”

The city of Montreal is asking people to have faith as they wait for the precipitation to be plowed.

“Clearing Montreal’s roads is a complicated process,” reads the statement. “It requires dedication, careful planning and the long-awaited return of God’s only son. Rest assured we’re hoping to have the city — and the physical manifestation of the Holy One — up and running again as soon as possible.” it continues. “We thank you for your patience and ask you to keep in mind that challenging jobs such as the Rapture, God’s triumphant defeat of the antichrist and municipal snow removal generally take at least a week to complete. ■