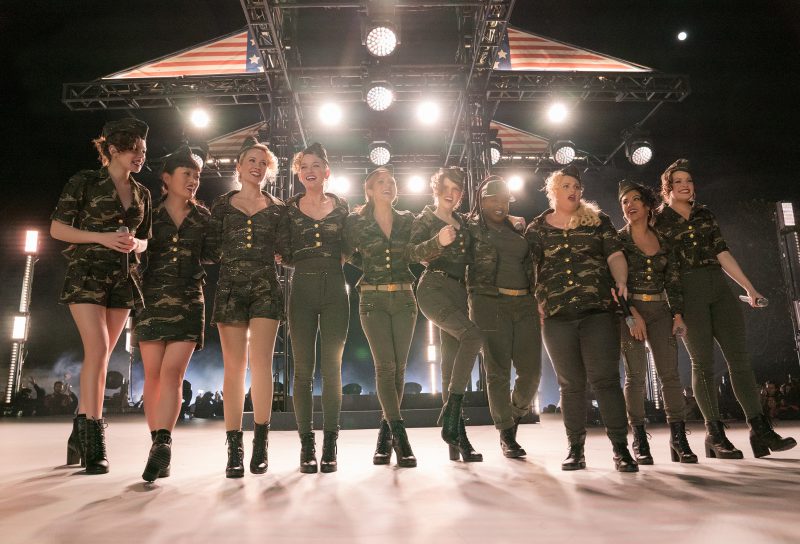 Pitch Perfect 3 gets a lot right about the soul-crushing reality of post-university life. The members of the Bellas, an all-girls acapella group, have graduated university and are now faced with the overwhelming awfulness of the adult world. The film opens as Beca (Anna Kendrick) quits her job as a music producer after dealing with one humiliation too many. During an impromptu reunion of the old gang, they decide to have one more go at their glory days and go on a USO tour, which turns into a competition to become the opening act for DJ Khaled.

The film’s premise isn’t bad, at least before they ship out overseas. As we are re-introduced to each member of the Bellas post-university, they are deep in the despair of millennial angst. While they were high-achieving young women in college, faced with the lack of opportunities in the real world, they yearn for their glory days. With strained smiles and dead, teary eyes, they try to convince themselves that things aren’t so bad, but their new lives are rich in disappointment.

This idea, though, is never really developed — as soon as the Bellas head off to Europe, any semblance of nuanced characterization or plot goes straight out the window. Things quickly get weird — and not good weird. As they travel across Europe entertaining the troops with two other bands, Fat Amy (Rebel Wilson) and the strained relationship she has with her mostly absent father (played by John Lithgow) becomes the central focus. Rather than keeping things simple, focusing on the singing and the trials of growing up, the film swiftly shifts its focus to an international crime plot (!).

While Pitch Perfect 2 was a huge step down from the first film, this one takes things to new lows. It is a huge shame, considering the series needs so little to succeed. It already has a likable, well-established cast and a musical premise that has clearly captured the attention of audiences. The script for a Pitch Perfect film doesn’t even need to be good, it just needs to be not-bad — Pitch Perfect 3 can’t even do that.

Most disappointing, however, is the fact that there aren’t really a lot of memorable musical scenes. An early riff-off with the two other bands on tour has moments of inspiration, especially due to the casting of Ruby Rose (who oozes sexual charisma) as the lead singer of “Evermoist,” but even then the sequence doesn’t live up to the previous two films. Way too much of the scene is focused on the fact that they are breaking away from acapella by integrating instruments, leading the whole thing to come off as incredibly strained. Overall, only the performance of Britney Spears’ “Toxic” really raises the game in any significant way, and the context is so ridiculously dumb that it’s really hard to even enjoy it.

Hardcore Pitch Perfect fans will still likely get a kick out of this final entry, especially if they convinced themselves that Pitch Perfect 2 was a good movie. The film relies heavily on the natural camaraderie of the mostly female cast, which still drives the film into likeability in spite of so many glaring flaws. More than anything, Pitch Perfect 3 is a disappointing end to one of the most improbable franchises in recent film history. The Bellas deserved better.  ■