Revelations of sexual assault have rocked the acting world in recent months, shining a harsh light on the many barriers facing women in the arts. Montreal’s Imago Theatre, however, is encouraging women to tackle these barriers head on through its youth mentorship program, ARTISTA.

“Every single time we get into the room together,” says Joy Ross-Jones, actor and program director of ARTISTA, “there’s a sense of openness and bravery.”

Modeled on a program in Toronto, the Artists Mentoring Youth (AMY) project, ARTISTA invites women aged 16-21 to meet weekly with three female mentors for a communal meal and theatre training. At the end of the 15-week session, the group stages their original work.

Ross-Jones wants participants to leave ARTISTA feeling an “ease taking up space in the world.”

“Being raised as a young woman by a mom who was raised in the 1950s,” she says, “it [was] about squeezing in, and that’s not fun. It’s not fun to always feel like you’re infringing on the world and to have to apologize for your presence.”

In theatre, women find a way to squeeze in or risk being squeezed out. “The number of people working in theatre that are young women versus the number of roles for young women is really disproportionate.”

This leaves young women vulnerable to being replaced when they speak out against harassment.

Though there are still not enough roles for women, ARTISTA encourages participants to fill that gap with their own voices. The program isn’t just interested in churning out professional actors, although several participants have gone on to perform in Fringe and professional shows, with one alumna receiving a nomination for a Montreal English Theatre Award (META) this year. The focus is really on giving young women “the tools to tell their own stories so they can carve out their own spaces.” 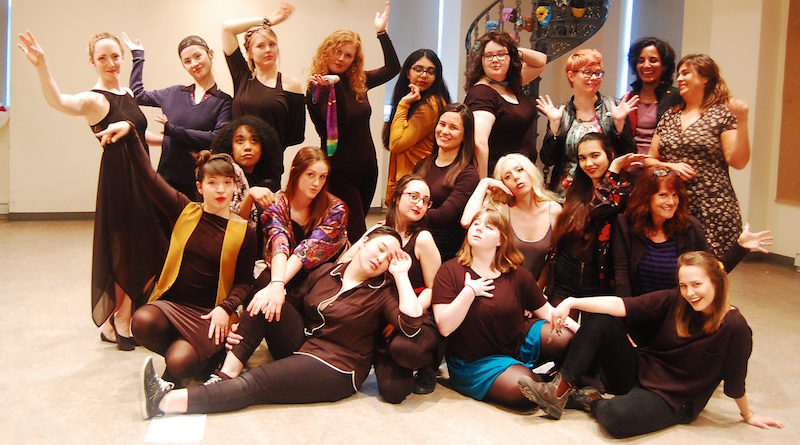 ARTISTA is free for participants, including the weekly meals — unusual in an industry that rewards artists with expensive training from prestigious academies.

“The free training and the free food has to be there because if we want to make the performance world more intersectionally empowered, then we have to open it to people who don’t have the finances to access it.”

Money aside, the meals create a sense of comfort, allowing participants and mentors to get to know each other before the potentially intimidating training sessions. The meals set the tone for ARTISTA’s collaborative approach to theatre, where individual growth happens through collective creation.

“It’s about being able to arrive in the space and know that your needs are taken care of so that you can just get into a creative space with more ease.”

This process of creating community extends beyond the program itself. Last year, ARTISTA introduced a theme — home and belonging — and asked participants to interview women in their own communities. The interviews became building blocks for a final production that explored the personal and political intersections of home, a timely topic given this year’s Canada 150 celebrations.

“I’m really proud that ARTISTA is finding a way of always being in conversation,” Ross-Jones says. “We’re not stuck in a little room in a vacuum, we’re living in the world, talking about what is happening to us and to our community members.”

This year’s tentative theme is invisibility, a subject ripe for conversation, to say the least.

In a field where talented women are often erased by powerful men, ARTISTA creates a network of women who support and lift each other up. Ross-Jones notes that there’s often a notion that women working together get competitive.

“A lot of people ask me, ‘Do you get those catty women dynamics?’” Ross-Jones says. But the reality at ARTISTA has been the opposite. At ARTISTA, “there’s a willingness to hold space for each other and not cut each other off” that’s hard to find elsewhere.

As for why this willingness exists, for Ross-Jones it comes down to the experience all women have in common: marginalization.

“I think the women mentors have gone through their lives trying to break into an industry that is very male-dominated and very white,” she says. “They know how hard it is and they know how scary it is to stand in front of an audience and be vulnerable and deliver a beautiful performance. So there’s an empathy factor that is present right off the bat. I guess that is what it is, it’s empathy — which is magic.” ■

ARTISTA’s 2018 session runs from Jan. 22 –May 17. You can apply to the program until Jan. 5. You can also donate on their website to help keep the program free.