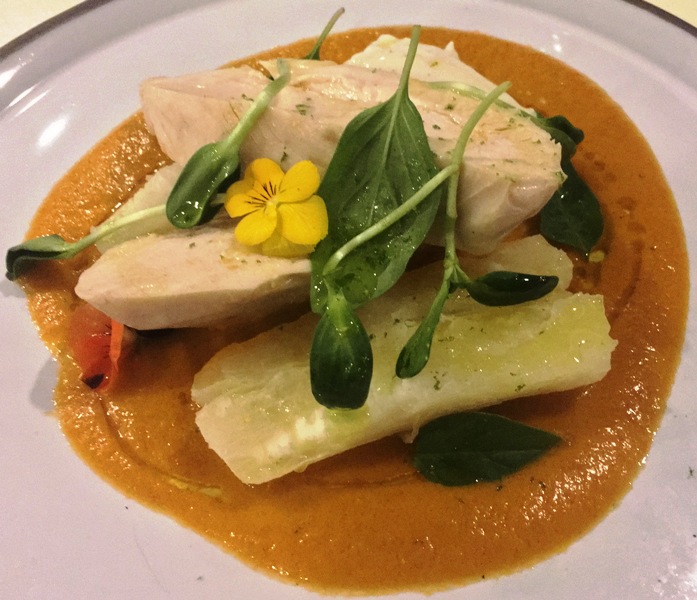 It’s increasingly par for the course that the work of restaurateurs and chefs are seasoned through their roots and travels.

Combined, Fieldstone co-owners Emiliano Rivera and chef Chanthy Yen have a hell of a story to tell, a road map of influences: Rivera has his Mexican roots, while Yen is Cambodian-Canadian with experiences accrued at the famous Spanish institution Mugaritz and a research position with the El Bulli Foundation. It’s almost daunting for the casual diner when the CVs of the hosts are worldly enough to be intimidating.

That’s the impression I got when thanking Yen for my dinner, as he mentioned that the restaurant’s immediate locals — Ubisoft workers and bohemian passersby — weren’t the quickest to warm up to Fieldstone. Then again, this isn’t the kind of place where you merely “grab a bite” or exchange pleasantries. Yen and Rivera are relatively new to Montreal and the table’s set, so sit down and listen to what they have to say.

Fieldstone’s à la carte dinner menu is pretty pared down with its four opening appetizer acts, four mains and two desserts. There are tasting menus available as well, but my friend and I opted for a self-guided tour.

The pear and radish salad was a welcome seasonal starter. The vegetation was untampered with save for a drizzle of oil, but what made the dish special was its range of temperatures, incorporating the earthiness of toasted chia and pungency of melting Oka shavings. My being a sucker for cheese aside, a tamarind and pear pairing works especially well in the cold months.

Sticking with plates that could be shared, we ordered churros and urchin. It was at this juncture that the variety of backgrounds behind the menu started to draw a lot of attention to itself. Blue corn gave the churros an almost cavernous hue, and the sea urchin emulsion acted as the primary agent for flavour. Urchin itself has a slightly sweet taste of peanut butter on its own, which complemented the common association with churros being a sweeter dish, and was doubly so when tasted with a daub of the plate’s crab apple jelly: A deconstructed and retooled PB&J, really. Finally, a heaped spoonful of crushed wasabi peas gave this one final kick of spice.

Then came “forbidden” rice, or black rice that acquired its name from the exclusivity attached to it by past Chinese Emperors. When cooked, it turns a deep purple that might be hard to see in the dark wooden bowl it was served in and the dim light of the evening. This had to be one of the most casual offerings of the evening in how it was dressed: Lightly pickled enoki, an egg marinated in soy and the creaminess of an avocado slice. While the rice itself was a neutral base, the husk of the grains gave each of the ingredients a chewier texture.

As far as mains go, the season calls on our instincts for heavier foodstuffs — it’s been bred into us that root vegetables are what the pantry’s packed with at this time of year. You could be someone who’s not normally one for meat and potatoes, but it’s certainly an inviting option come autumn.

That’s what seemed to be the inspiration behind one of the two dishes that arrived: chicken and cassava. Laid on a squash purée brightened by turmeric, the chicken was exceedingly moist and tender, cooked in such a way that it was easily cut apart with a pressed fork. It was somewhat surprising then to find that the cassava was tougher than the bird, though not in an off-putting way. The dish committed what some may consider to be a faux pas by incorporating a 64-degree egg, and while the yolk mixed well with the seasoned squash, it gave the plate an even mushier range of texture.

That dish was largely eclipsed by the beef, a not-too-spicy flank of meat that was seasoned and cooked off to a both crisp and soft consistency. Paired with roasted sweet, poblano and shishito peppers and a chimichurri sauce, this spoke quite a bit to Yen’s time with Latin American cuisine, evoking fire and panache. Punctuated by a small handful of pumpkin seeds, each bite was more enjoyable than the last, and I wished there was a chipa to mop up the rest of the sauce.

While the dishes up to this point had given us a good sense of Yen’s time and influences abroad, his desserts really revealed his creativity: foie gras ice cream with meringue prepared as sponge toffee, and blueberries both fresh and crumbled, was a sweet and savoury space-age treat. The other, a cake with chocolate ganache and a dulce du leche made with caramelized goat milk, was an incomparably better take on the traditional caramel, with a slightly sour edge.

Fieldstone is just starting out, having opened only two weeks ago, but the restaurant merely has to catch up with the experience of its owners. This meal was almost impeccable in its execution, but I suspect even better things to come as the seasons change and produce alters the menu even further. There’s a lot of promise, and certainly more stories to be told. ■