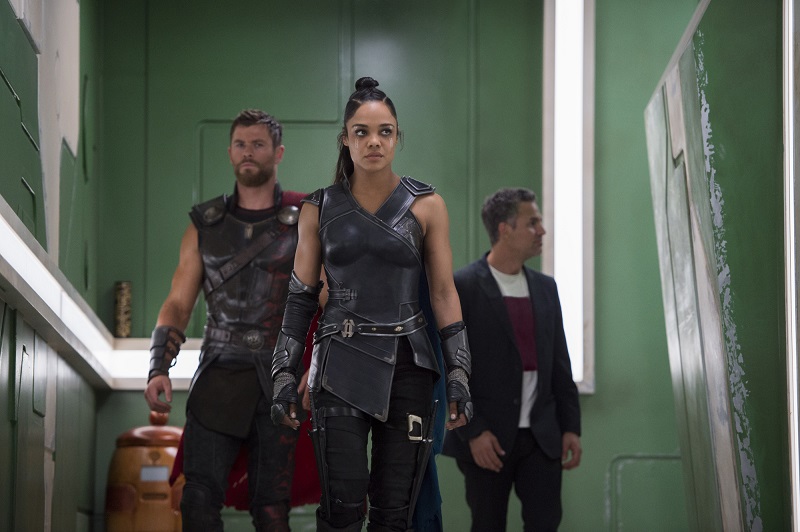 It’s not that surprising that superhero movies took so little time to become completely serialized. Not only are comic books themselves serialized, but the films that laid the template for the modern blockbusters were themselves inspired by serials of the 1940s and ’50s. As bored as I can be with the current slew of franchises and as much as I can shake my fists to the heavens in protest, I have to face the facts: this was inevitable. Serials factored into the birth of blockbusters, they’ll factor into their high point and they’ll almost certainly factor into their death. (If not their own death, maybe mine.)

It’s therefore somewhat pointless to expect anything new out of Marvel movies unless they themselves are presenting a new character (and even then). The third Thor movie (I’ve lost count of which other ones he appears in; let’s just say that Thor is around a lot) can’t really be that much of a departure, even if you rope in one of the best comedic directors currently working today to direct it. I had hoped that bringing Taiki Waititi into the Marvel fold might pay off, but I was also fairly certain that Waititi, like everyone else before him and everyone after, was working with a fairly strict set of rules. In the Marvel world, there’s no such thing as rip it up and start again.

Thor: Ragnarok sees Thor (Chris Hemsworth) return to his home kingdom of Asgard (after fighting a lava monster/actual god, I guess) to find that his shit’s fucked up. Heimdall (Idris Elba), the keeper of Asgard, is nowhere to be found; he’s been replaced by the significantly less trustworthy Skurge (Karl Urban). Thor’s father Odin (Anthony Hopkins) is nowhere to be found, either; instead, his no-good shapeshifting brother Loki (Tom Hiddleston) has literally assumed his form and is running Asgard in his place. (Note to Marvel movers and shakers: the whole is-Loki-my-friend-or-not is the most tired plot device of pretty much every and all movie franchises. I understand that Hiddleston is a big deal that you can’t quite part with, but at least do not make all your movies revolve around the fact that he will eventually betray everyone five or six times per movie.)

Thor eventually finds out from Doctor Strange (Benedict Cumberbatch) that his dad is actually holed up in Norway, that he has an evil older sister named Hera (Cate Blanchett) who wants to rule and/or destroy Asgard and that fixing all of that is going to be significantly more complicated when he’s captured by a former Valkyrie turned “junker” (Tessa Thompson) and becomes the gladiator/slave of a hedonistic weirdo (Jeff Goldblum) on a wack-ass planet where he also bumps into an old friend: the Hulk (Mark Ruffalo).

One does end up wishing Waititi had gotten his hands on Thor somewhat earlier. It feels less like Waititi’s actual vision of a Thor movie and more like he was hired to add a dash of Waititi wherever the film wasn’t busy stuffing more arcane mythology and double-crossing Norse gods. The endless amount of unspooling prophecies and other noodly fantasy bullshit has always been the major flaw of Thor as a franchise; it’s hard for the films not to get lost in the portentous nature of its own world, and the best strategy has always been to take Thor out of there and focus on the fish-out-of-water aspect.

Thankfully, Waititi manages to cram the middle portion of the film with enough jokes and loose, chummy charisma that Thor: Ragnarok, for all of its flaws, also feels like the only superhero movie I could conceive of revisiting for the pure pleasure of it. Skewing much closer to the spirit of the Guardians movie (complete with overused classic rock cues), Thor: Ragnarok does the seemingly impossible and makes Chris Hemsworth not just likeable but a legitimate breathing, reacting human being in a way that the other films never could. Bringing in Goldblum as the secondary villain helps a lot, too; the film latches on to his jazzy patter pretty early on and makes him more than just a tacked-on, wacked-out second banana.

Thor: Ragnarok’s flaws are the same as all Marvel movies. Its villain, though finally played by a great actress who is fully sinking her claws into it, has vague and boring motivations that unfortunately doom Blanchett to playing out minute variations on the same scene (yelling about domination while CGI swirls around her). Like every movie before it, its stakes are fairly limited, though some actual permanent changes occur by the time the credits roll around. Like nearly every blockbuster these days, it eventually gets bogged down in dull action scenes that are nigh-unfollowable.

These are not flaws that are Waititi’s fault — they are things that come almost prepacked in a movie like this one. Waititi brings wit, verve and a sense of fun to the dullest of the Marvel characters. ■