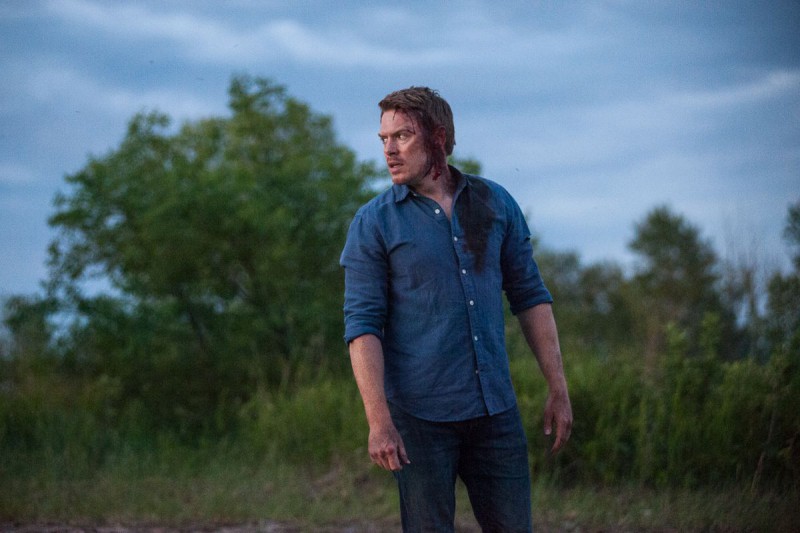 If you’ve ever seen the work of married Quebec filmmakers Steeve Léonard and Caroline Labrèche, you know their humour. Their shorts have included Jesus Christ picking his nose in a CinemaScope commercial and Stormtroopers performing impromptu renditions of “My Sharona.” Their first feature-film used much of the same Monty Python and Family Guy-inspired humour. Sans dessein premiered to sold-out audiences at 2009’s Fantasia Film Festival and walked away with the Audience Award for Best Quebec-made feature film.

Eight years on, their second film is ready for release. Radius tells the story of a man who, after waking from a car crash with no memory of what happened or who he is, learns that anything that comes within a 50-foot radius of him dies instantly. Gone are the cutaways. Gone is the humour. This is a high-concept sci-fi thriller that is pure genre filmmaking.

We caught up with Léonard and Labrèche to talk about their career trajectory, convincing people they could make Radius and their advice for those starting out like they once did.

Zac Strevens: Your filmmaking path together has been really interesting. Sans dessein felt like a natural progression from your comedic beginnings 15 years ago with Dead Cat films. Now, with Radius, you’ve leapt into something that is pure genre and no comedy. Did that feel natural?

Caroline Labrèche : We are huge fans of sci-fi. It’s always been in our blood. So for me, personally, it was natural to try and do that. I never felt that it was a big leap from doing comedy to this, because sci-fi is something that I felt really comfortable with. It was not easy, but it was normal. It felt like, “Yeah, I have to do that.”

Steeve Léonard : But from the outside I understand what you’re saying – short films with stupid jokes and Monty Python-type humour, Sans dessein, and now this. That’s just because comedy was cheaper and easier to do. You get with a bunch of friends, you riff on some stuff and then it’s like, “is it expensive to shoot this gag? No…” That’s how we did shorts — just shoot.

ZS: Was it hard to convince people behind the scenes that you could pull off something like Radius?

SL: We thought Sans Dessein was going to be the stepping stone to something else. With Radius the switch is the genre, but to put people at ease with this jump we invested our own money and went out and shot a “proof of concept.” You can’t just give your script to somebody and say, “Hi, we did Sans dessein, a dumbass Family Guy-type of comedy and now we want to do a big thing.” They’re like, “ehhh, not sure.”

But by seeing this proof of concept — and we shot this thing even slicker than what the movie turned out to be because we took two days to shoot five minutes — it’s proof that these guys can actually do what they’re saying they can.

ZS: It’s clear from all the references and pop culture non-sequiturs in your previous work that you’re huge fans of genre filmmaking. But was this always the plan? Make some shorts, make a feature and then make something like Radius?

SL: You can’t plan that really, but the plan — and this was an actual life plan — came to be when we were shooting shorts. In 2007, I decided we weren’t doing shorts anymore; “We are making a feature-length film because that’s what I want to do with my life.”

I started writing Sans dessein, Caroline was still working and at a certain point she quit her job and we made the movie. And the plan was Sans dessein will be a sort of demo. This is how naive we were, we thought that people would see this and say (mimics stereotypical 1950s showbizz accent) “these kids have moxy and they can do it, they’re hard workers.”

And then from there it’s, “well next year I’m shooting a movie, goddamnit.” But it took eight years. After Sans dessein it took a while, from 2008 to 2016 almost. But it was a plan. Now did it go according to plan? Hell no! Things fall through, money doesn’t come in, doesn’t work, blah blah blah. It switched hands three to four times…

CL: We didn’t find our good match for a while.

SL: It’s a long, complicated thing, and while all this is happening you’re just waiting. 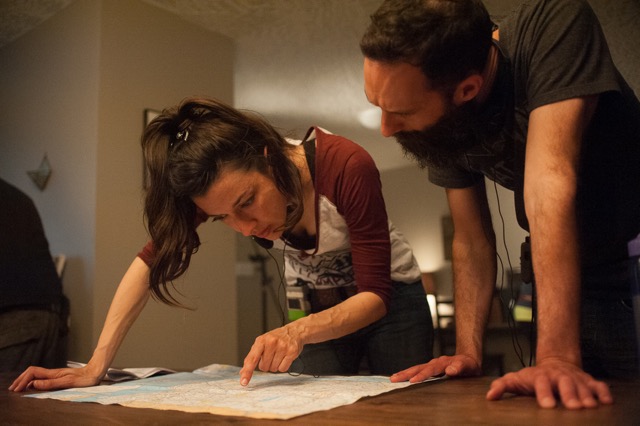 Caroline Labrèche and Steeve Léonard on the Radius set

ZS: Were you working on other projects while you were waiting?

SL: We were aiming so large for a while. We were writing TV pilots on spec…

CL: We tried everything. We must have come up with 10 concepts for television.

SL: We had a whole sitcom planned. We had game shows planned. We had reality TV. We were just knocking concepts out and calling people up; “We have a concept, we want to meet you.” Let’s try and aim as wide as we can and one of these fish is gonna bite… Aim, bite, fish. Metaphors (laughs).

ZS: That’s the strategy that so many have….

SL: We didn’t even have YouTube. We had to show our shorts at Kino and festivals. And it was a big deal when these guys said, “we will pick up your short and show it at Fantasia.” It’s like, “Wow! Somebody gets to see what we did.” Today you shoot your brother farting and it’s on YouTube.

ZS: You started doing these videos and shorts in the early 2000s when, as you say, there weren’t platforms like YouTube and Facebook, and you couldn’t simply film things on your phone. What would your advice be to someone starting out like you did, but in this saturated marketplace?

SL: If somebody wants to get into feature-length filmmaking they should make shorts and make them nice. Don’t shoot it with your phone, or if you do there’s got to be a concept behind it.

SL: Especially in Montreal. They’ll humour you. They’ll meet with you, they’ll see what you have to say, what you’re about and all that. If it works, fine, if it doesn’t, fine. At least you got your foot in the door and got to speak to somebody.

CL: The thing is contacts. That’s it.

ZS: Now to Radius. What is it about movies in this vein that you like so much?

CL: It’s not the usual recipe. It’s fun to watch a movie that surprises you, where you’re not sure where it’s going. Like being, in the first five minutes, “Okay, that guy is probably gonna fall in love with that girl, and it’s probably gonna happen this way.” Then the movie ends and it’s exactly how you thought. It’s the aspect of surprises that we like so much. We’ve seen so many genre movies that blew us away through storytelling and the ending. That’s what I like about it, it’s not normal storytelling.

SL: It feels like movies are more original when they work in this space, I think. You get a comedy — unless it’s really, really out there — they hit beats and you know where it’s going and you walk out satisfied. That’s fine. But you take a movie like Oldboy and it’s a mystery but at the same time it’s very dramatic and it’s very melodramatic.

CL: And you never know what’s going to happen and you want to keep watching because it’s intriguing. That’s what’s amazing when you watch a movie, being on the edge of your seat and saying, “you have my attention.”

ZS: You shot Radius in Manitoba where it’s so green and full of life, yet the whole movie is about death. Was that a deliberate juxtaposition?

SL: Here’s a secret: 20 per cent of what’s in a movie isn’t deliberate. When we went and did location scouting, everything was dead. They hadn’t started planting in the fields so it was just black earth. There was no life, it was awesome. But then you go back in the summertime and it’s all nice. We tried to suck the colours out of certain shots because it was just too nice.

But, then again, if you don’t know what I just said, you might think that’s what we wanted. There’s so much life and in contrast this guy is walking death. It still works.

That’s the beauty of movies: as a creator you can put what you want in there but the audience is going to add way more. Or way less. Or just be off the track. Or add layers. That’s crazy and you can’t control that. ■