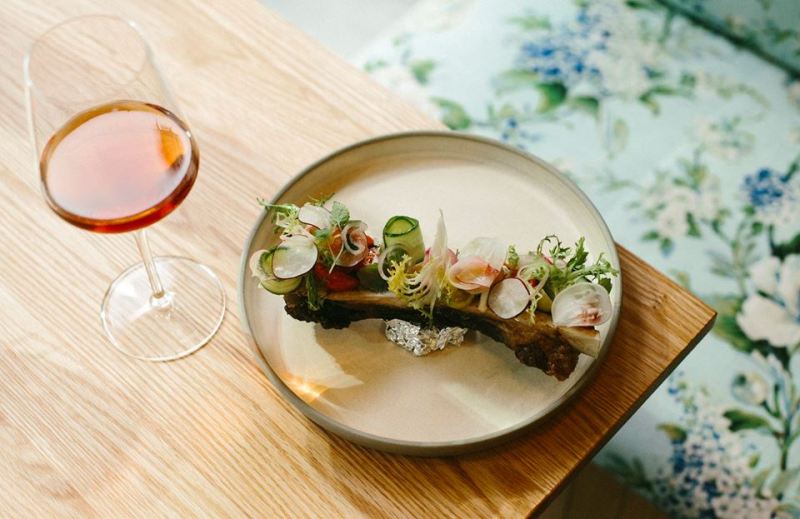 On my way to Monopole, I had “Once in a Lifetime” playing in my ears.

In another part of the world, I walked through the city’s newest park, a $140-million canopy over what the city deemed an “eyesore” before it was built: Exposed open highway, lack of pedestrian access and grey brutalism over greenspace. You may find yourself living in a beautiful house.. Now completed, it opened up walkways to Cité-du-Multimédia, a tech-boom faux neighbourhood catering to the higher end of five-figure incomes at least, condominiums encroaching on or enveloping entirely the old industrial structures around this part of town, and many tiny dogs being taken for evening strolls. How did I get here? Admittedly, I don’t have many reasons why I’d find myself in this part of town. Even if there’s attracting feature to enjoy in what a municipal board calls “revitalization,” I can’t help but feel that something’s off.

It’s businesses like my destination that have been placed in the ground floors of condos to primarily serve their residents. Same as it ever was. Easy to overlook, they’re luxuriant takes on holes in the wall. I’ve found many to be just that: eateries that’ll serve some upscaled yet easily recognized dishes you’d be too tired to try cooking for yourself, or coffee you don’t feel like using a K-Cup on. Monopole broke this mould in menu and service, and perhaps that explains in part the name, a monopoly on what was otherwise a lacking selection for informal combinations of cafés and snack bars.

First and foremost visited for a long list of reds, whites and bubblies alongside cocktails, coffees and Hof Kelsten pastries, their menu by Julien Coulombe-Morency could come off as an afterthought, but the food’s yet another reason to visit this 30-seater with an industrial boutique interior made up of exposed ducts and floral-print booth seating.

My friends came in on a Tuesday night to an all but empty space, and we were promptly seated and served by one of the owners, the genial Gabriel Gallant. After ordering up some cocktails — try the tea punch for two, with its mix of Cointreau and white rhum — we looked over the menu made up of sharing plates which, as Gallant explained to us, come out to two to three per person. I’d agree with that, up to mentioning that all plates brought to us could be best shared between two, not three, people unless you’re one to enjoy a bite and a half of something. You’ve otherwise got a tasting menu on your hands.

For appetizers, we started with their beef tartare ($12) and a plate of roasted broccoli and pistachio on a bed of homemade ricotta ($10). One of my friends said it best when mentioning that he’s yet to have eaten a tartare he’s been blown away by; fair enough, but I enjoyed the mustard aftertaste that came from the dish even after its yolk was broken. The broccoli on the other hand was a better way to start the night, cooked darkly and served with micro mint, dill and radish slices atop their house ricotta. The cheese itself wasn’t overly flavourful, but when it was mixed with the other ingredients, it left an unmistakable taste that open fires can leave with you.

Appetizers away, we received chanterelle cavatelli on a bed of pumpkin purée ($20) and the burnt eggplant pancakes ($12) next. The former was one of the best dishes of the night for being one of the richest, a buttery blend of mushrooms and not-quite al dente pasta whose salt slightly, very slightly, overpowered the dish’s topping of greens, parm and slices of onion. The pancakes made a dinner out of breakfast through its eggplant puréed down and cooked into patties that alone were filling but lacked seasoning, served atop the recurring ricotta and topped with a slice of heirloom tomato.

The last two dishes of the night were the pan-seared pork shoulder ($18) and plate of veal tongue served with sea snail and celeriac ($17). The pork was refreshing first and foremost in how, for once, it wasn’t braised down into pulled pork (enough already!); it was also one of the most stable dishes of the night, from its plainspoken medium-rare meat, a red wine demi and half-caramelized onions. The veal tongue was a sharp contrast to the shoulder, coupling a dark offal and the same demi, with bitter celery root, sour notes of pickled snail and dollops of sour cream. It was unbalanced, to say the least, without enough protein to pair with each bite.

Thankfully, the dessert was the evening’s saving grace: raspberry terrine ($8). It was a fruit-filled piece of agar-agar, topped with cream and mini-mint. My friends loved this one for how pleasingly tart it was, although I wouldn’t have minded a dusting of sugar to cut it as opposed to its lime zest.

I’d wondered whether or not it was the best idea to have come to Monopole exclusively for the food. Just as much as how I couldn’t shake that something is off with this neighbourhood between Griffintown and Old Montreal (the rapid expansion, the eyepatch of a park over the eyesore of the highway?), something was generally off with each plate. So many would employ the same micro greens, slices of radish, the same parm shavings, herbs like dill in particular, a repeated ricotta. I’d rather think that these repetitions speak less to a lack of invention and more to how Monopole would sooner expect a diner to pick up one or two of their artfully plated dishes, not eight. Better for a snack, and less so a full dinner. ■