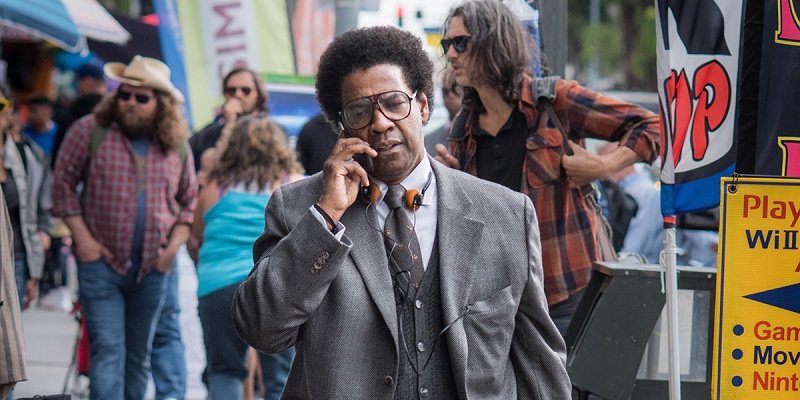 Industry analysts and pundits have been claiming for a few years that no actor has the power to hang a film on their name alone. Franchises have become what marquee names once were. That has allowed even the most famous actors to dally in independent films, character parts, comedic departures, Carpool Karaoke and other image-shattering tactics that weren’t necessarily available to the previous generation. But over the last 30 years or so, Denzel Washington has been dependably Denzel. Authoritative, stoic, dependable, dad-like even when not explicitly playing a dad, Denzel Washington has one of the most consistent on-screen personas of any currently working actor.

With his dorky fro, clunky aviator glasses, frumpy leisure suits and mumbly, scattered speech patterns, Roman J. Israel, Esq. hardly seems like a close fit for the Denzel Washington we know. In fact, he may be the closest thing to a true character part that Washington has played since the ’80s — though it hardly qualifies as a character part when your character’s name is also the film’s title. Israel is a curious concoction: an eccentric man out of time who may or may not be on the spectrum, a brilliant mind who seemingly spent his entire life content to work for a pittance and whose social justice ideals are firmly entrenched in his college years, nearly four decades past.

The character of Israel is both a believable eccentric and a bit of a catch-all of thematically relevant tics that serve the broader points director Dan Gilroy is trying to make. Roman J. Israel, Esq. is a film about honesty, selflessness and idealism and what really happens to people who uphold those values  in a world where those two things aren’t necessarily prioritized. It’s a writer’s movie —a talky, idea-heavy film that might feel nakedly expository if it wasn’t for the fact that everyone is always talking and talking about things that are inherently heady and complex.

Roman J. Israel has spent the majority of his career working for a well-respected civil rights lawyer in Los Angeles. His particular eccentricities have kept him away from the courtroom, instead becoming a wizard at the particularities of legal paperwork. When his mentor and employer dies suddenly, Israel finds himself out of a job; it seems that defending the poor and the downtrodden has left the firm more or less broke, and its affairs have been handed over to one of the mentor’s former students, George Pierce (Colin Farrell). Pierce is a considerably more business-minded, high-flying lawyer with a firm that’s leagues more dynamic than anything Israel has been used to. The new opportunities that it gives him also opens up a whole world of problems that put his ethics to the test.

Roman J. Israel, Esq is one of those high-minded movies that seems to start with a theme and back into a character. I usually have a problem with these; they tend to showcase a character so peculiar that it takes most of the movie for the quirks to coalesce, leaving the viewer struggling with disparate parts for too long. The film needs Israel to be idealistic, road-worn and set in his ways; he also has to basically wake up to the modern world at the precise moment that the movie needs him to, yet have an encyclopaedic knowledge of the law. (He still communicates primarily by mail and lives in the one-room apartment he presumably moved into when he began working as a lawyer, calling continuous noise disturbance complaints on the condos being built next door. Despite his supposed vested, life-long interest in civil rights and activism, he seems to have stopped paying attention around 1974.)

In that sense, Israel isn’t a particularly realistic character, and the film takes a long time to get going precisely because it spends so much time getting all its ducks in a row. What makes Israel work is Washington’s committed and surprisingly chameleonic performance as this idiosyncratic genius who has become unstuck in time. It’s not the most comfortable you’ve ever seen Washington (he has boring, generic action movies for that), but he certainly is trying, and the inherent gravitas that comes with being such a consistent actor lends Israel an air of mystery and a weighty sense of the past. We don’t necessarily learn much about him, but we feel him heavily.

It’s Gilroy’s ambitions that ultimately define Roman J. Israel, Esq. There’s material for two or three separate movies in here, and he ultimately decides to follow the most narratively banal one. Instead of a character sketch or a film about activism, he settles the film’s fascinating-though-wobbly wheels down a fairly straightforward path that ultimately makes the film somewhat less than the sum of its parts. It’s scattershot but entertaining, overly ambitious yet never condescending to its audience despite the fact that it cannot possibly keep all of its plates spinning at once. I don’t think that Roman J. Israel, Esq. fully works, but the ways in which it tries are undeniably satisfying. ■