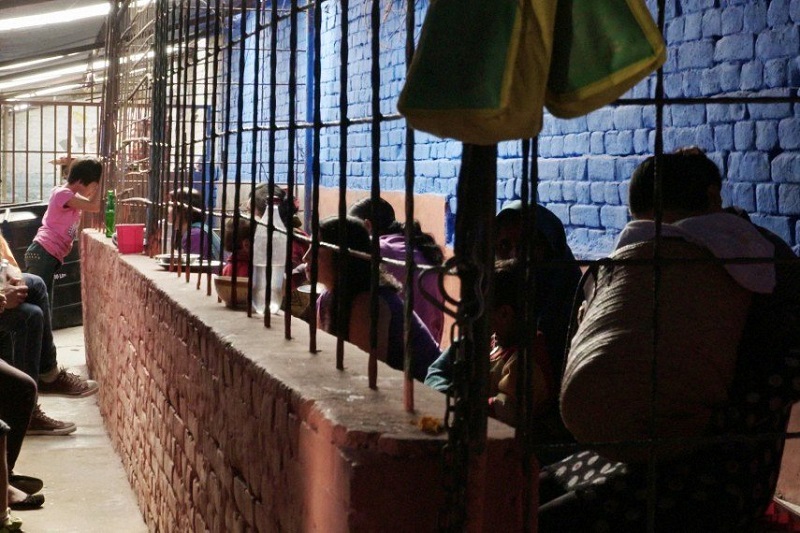 “I asked myself what I could do to at least start a debate,” says Léa Pool about her latest film, Double Sentence. “I knew that I couldn’t actually cause any change, especially since the laws and regulations differ from country to country. It’s very different from Nepal to Bolivia to New York to Montreal, but the goal was to open the discussion and to make it so that, when a woman is condemned, we find solutions that don’t destroy the family and make it so that children are collateral victims of the judicial system. The ‘double sentence’ of the title goes both ways. The children are punished, yes, but the mother is also punished twice by having her children taken away. Being apart from your children is very hard for a mother – even one that’s a criminal.”

Double Sentence focuses on an oft-forgotten victim of crime: the children of jailed mothers. Having had nothing to do with the crime, they nevertheless serve their own kind of sentence. Pool looks at four distinct situations – one in Nepal, one in Bolivia, one in the United States and one here in Montreal – to explore what happens to children when their mothers are in jail. In Nepal and Bolivia, the children are often jailed alongside their mothers or placed in group homes; in Canada and the States, they have limited visitation rights.

Double Sentence is framed around a manifesto or bill of rights penned by the San Francisco Children of Incarcerated Parents Partnership, which outlines what those children feel are their rights as the children of incarcerated parents. The bill of rights provides the framework for the film as it jumps back and forth between stories, but it wasn’t necessarily the trigger for Pool’s explorations.

“It took a while,” says Pool. “At first I thought about making a film only about the situation in Quebec. Through my research, I learned that there was extraordinary work being done in other countries. It made me want to meet with the women who were taking care of children in these situations. What I noticed is that these children are ostracized – they have no right to speak. I had a lot of trouble finding children who would allow their faces to be shown. I told myself I had to give them the right to speak, because no one ever let them speak for themselves.”

The film draws a few parallels between each of the situations, though its central thesis remains that all of these children are serving their own sentence for a crime they didn’t commit. “In Nepal, kids whose parents are in prison are mostly left to themselves,” says producer Denise Robert. “Thank God for this woman who picks them up and gives them an education and shelter. She brings them back to see their mothers so there can be a bond between the mother and the child. In Bolivia, the kid lives in prison with the mother, then by the age of seven or eight, they go to a government-subsidized organization where they take over the child’s needs. In Quebec and in the U.S., it’s a little more ‘organized.’ But you have to stay open to what they tell you, and to the story that comes out of what they tell you.”

In most of the situations, the viewer is not told explicitly what crime the mother has committed. For Pool, that was a very deliberate decision.

“I had relationships with all the mothers, so I knew,” she says. “It goes from very simple to very serious. Some are in there for 25 years, so you can imagine what they’re in there for. I felt it deviated the topic away from the children. For a child, a mother remains a mother. What’s interesting is that the children tended to sublimate their relationship to their mothers. They all thought their mothers were extraordinary – much more so than they would’ve had their mothers not been incarcerated – except the little girl from here. She was very mad at her mother! I was happy that at least one of them was mad at her mother because it’s one of the two realest feelings. The other one is guilt. A lot of children tended to think that it was their fault – that if they hadn’t had a fight with their mother, she wouldn’t be in prison.”

What’s perhaps most striking about the film, besides the conditions in which some of the children have to live, is how much growing up the situations force the kids to do. Though many of the children profiled are under 10, they possess a maturity and understanding that’s beyond the grasp of even some adults I know – while also remaining little kids.

“I think this film does show how those kids are so mature,” says Robert. “To them, their mother is not a criminal, she’s a good mom. In Bolivia, you see the conditions in which the kids live – the prisons are not set up to have kids there, but they still live there. It’s their home! Mom lives here, so this is my home! (…) What I see is that they have no capacity to judge. They might recognize that what their moms did is wrong. The little girl in Quebec, her mother is a thief and she recognizes that stealing is wrong. That being said, she still thinks, ‘She’s my mom. I love her. I want her to be proud of me.’” ■