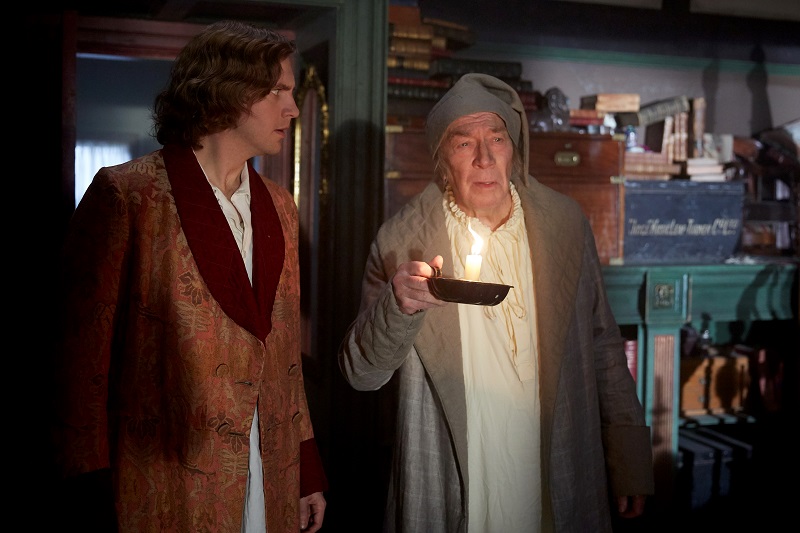 Dan Stevens and Christopher Plummer in The Man Who Invented Christmas

I have to admit that I did not expect the title of Bharat Nalluri’s The Man Who Invented Christmas to be quite so literal.

When Charles Dickens began writing A Christmas Carol, Christmas itself was barely celebrated in England. It was a minor religious holiday that most chose to ignore, until a hit-starved Dickens (his last three books had fizzled out commercially so he decided to capitalize on the holiday’s commercial potential by banging out a novel in six weeks.

“It had completely lost its way,” says Nalluri. “No one was really celebrating it. Cromwell was around and had kind of banned it, almost. No one had gotten a hold of it for a while. Dickens and a couple of other authors at the time had started writing about it again, but this book is the one that really hit the zeitgeist. Within a week of it being released, it was sold out; a month later, there was a play of it. It’s never been out of print since and been translated in pretty much every language. The genius of him was that he got to the basis of what Christmas was. It’s about redeeming yourself, basically, and maybe helping someone else out a little bit. I think that’s a universal human trait – everyone wants to be good to someone else. He just highlighted that.”

The Man Who Invented Christmas stars Dan Stevens as Dickens and chronicles the six weeks in which he worked at a breakneck pace in order to deliver the book in time for Christmas. Few of the money men really believed in Dickens’ vision, and the tight schedule caused much friction between Dickens and his family, not to mention his collaborators. Overworked and completely stressed out, Dickens is sometimes visited by his own literary creation, Scrooge (Christopher Plummer), as he struggles to hammer out all his ideas into a cohesive novel.

“I came to it about four years ago, but it’d been gestating for at least 10 years as an independent project – as many independent films do,” says Nalluri. “I came on and started working on drafts about four years out, but it really took off in 2016. We shot in a period of six weeks rushing up to Christmas 2016 – you know, life imitating art!” 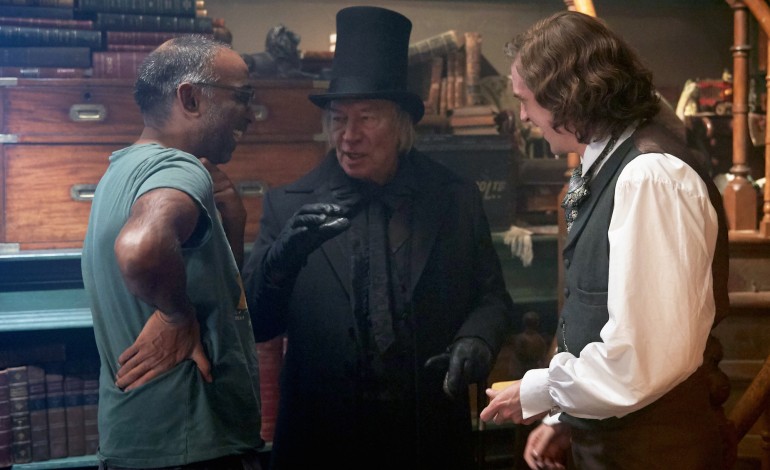 Nalluri’s body of work is varied, from the second sequel to The Crow to the Frances McDormand vehicle Miss Pettigew Lives for a Day, not to mention a solid decade working in British prestige television. A Christmas movie would seem out of place on that resumé – if it wasn’t for the fact that the defining characteristic of Nalluri’s oeuvre is its variety.

“That’s my plan!” says Nalluri. “As I get older, I’m just gonna get nuttier! (laughs) Don’t rest on your laurels. When I first started, I made a film for $50,000 in my hometown. We made it in two weeks, we edited it in two weeks and Columbia Tri-Star bought it. I thought, ‘Oh, okay. That’s easy.’ The next day I got a phone call asking me if I wanted to make the next Crow movie. I thought, ‘Oh, okay.’ I went and made the third Crow movie. And then I was in Hollywood. I was a young guy, and it was a lot of fun, but then suddenly I began being offered Halloween 24 and Friday the 13th 16 and so on. I didn’t realize how quickly Hollywood pigeonholes you. Within a snapshot, you’re a genre, horror-y kind of director and that’s what you do. To be perfectly honest, to be successful in L.A., you kinda have to do that. You go in as something and you stay that – you stay in that world because then people know exactly how to size you up and pitch you.

“Much to my agent’s chagrin, I got a bit older and I wanted to do something a little more interesting,” he continues. “I met a lot of playwrights and writers and discovered television. I came back to England to do TV, and the first thing I did for TV was an out-of-the-box hit, followed by another, then another. TV had gotten a hold on me, and I’ve only just started getting back to film now. My mantra now is really to try and do something that’s completely the opposite of what I did last. I don’t do on purpose, I don’t think, but I do try and find something else that’s interesting me. I could probably go back and look at everything I’ve done and give you a reason why I ended up doing it, but at the time I’m doing it, I have no idea why.”

Nevertheless, Nalluri remained aware that the Dickens classic has been filmed often – and that even a different spin on it risked creating overexposure. “Any good Christmas story usually has Dickens at the basis of it,” says Nalluri. “It’s a Wonderful Life is the classic example; that’s just A Christmas Carol backwards. (…) Everyone asks me what my favourite Christmas movie is and I always say Groundhog Day! (laughs) It’s again another Christmas Carol. This guy’s static in time, but he really does keep revisiting himself and becoming a different person and redeeming himself, becoming a better person.”

In the end, Nalluri’s film is an homage to the genius and enduring influence of Dickens’ book and overall oeuvre. “The genius of Dickens was that it was funny,” he says. “It made you cry. It was full of pathos. And in the end, you know, it’s a sci-fi story! A man travels back in time – no one had ever written something like that before. Now it feels like an old cliché, but at the time it was amazing. You’re going on a rollicking adventure through time. That’s pure populist fiction, but the genius of it is that just underneath, he tells you how to be a better person without telling you – if that makes any sense. He’s not preaching to you – you never feel preached at. In the end, this is a Christmas movie: I want to enjoy it, have fun, have a good laugh, maybe learn something new. You know what? If someone goes to the library and pulls out a Dickens book – if only one person does that, my job is done. I’ll have done what I set out to do.” ■

The Man Who Invented Christmas opens in theatres on Friday, Nov. 24. Watch the trailer here: