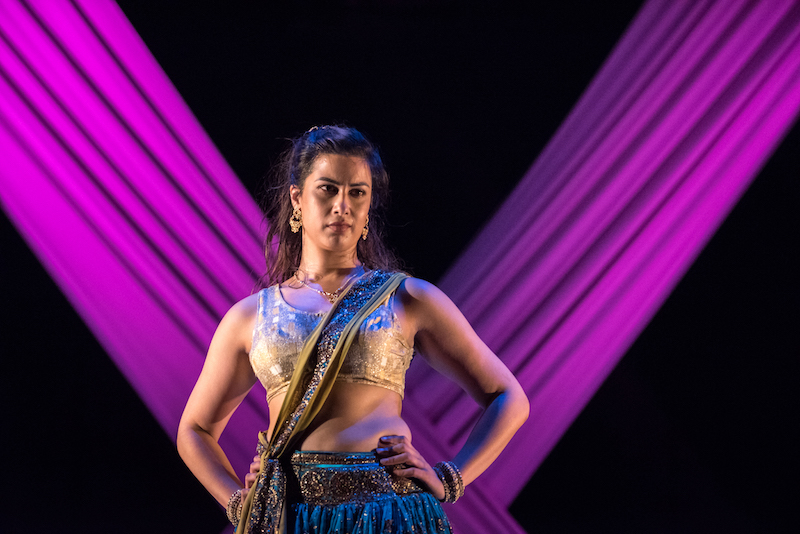 Anita Majumdar in Boys With Cars. Photo by Dahlia Katz

In a time of heightened social awareness, action and accountability such as we’re collectively experiencing now — with painful and necessary movements urgently challenging the power dynamics of sex, race and class — what are the best ways to engage with young adults and teens about these heavy topics?

From Nov. 24–Dec. 2, Geordie Productions will be presenting a play at Monument National that incorporates all of these elements and more, with award-winning South Asian-Canadian playwright Anita Majumdar’s one-woman performance Boys With Cars.

Set in the high school of a small British Columbia town, the play is really two plays — each segment depicts the same incident of sexual coercion from the point of view of two different students, each played by Majumdar (who portrays all of the play’s other characters also). The two characters, outsider brown girl Naz and popular white girl Candice, each have different interpretations about what happened, drawn from their divergent attitudes and social positions.

In addition to tackling hyper-prescient topics like male entitlement, consent and female empowerment, Majumdar’s story — like the lives of many everyday teenagers and young adults — also grapples with themes like cultural appropriation and fitting in vs. staying connected to one’s roots.

Punctuating the story throughout are energetic and expressive sequences of Bollywood-style dance choreographed and performed by Majumdar, a classically-trained Indian dancer.

In advance of Boy’s With Cars’ run in Montreal, we caught up with playwright Anita Majumdar by phone to learn more about the production.

Lisa Sproull: Does the narrative of Boys With Cars come from a place of personal experience from your own high school days?
Anita Majumdar: None of the plots in this play are about me, but certainly I witnessed them in my friends and people that I saw. After I graduated from high school, I started to reflect a lot about that time and thought a lot about how powerless I felt during high school—powerless to do anything about what I was seeing, which felt clearly wrong. Even from our educators, there was a real sense of boys vs. girls and how to educate girls to not get themselves into trouble. I found that really backwards, and what’s infuriating is that I still see that rhetoric! We’re still hearing ‘What were you wearing? How late were you out?’ and ‘How much did you have to drink?’ How can we blame young women in high school for coming to that double standard when that’s what we propose and offer women outside of high school?

For me, it was important to address this, but I wanted to do it through the lens of high school. As well, I’m a woman of colour—a South-Asian Canadian—and that felt like something that I had to be ashamed of when I was in high school, so that was a very direct and clear experience of mine that’s been infused into the play.

LS: How did you approach this material to aim the play at an audience of teens and young adults as opposed to an older audience?
AM: I think the appeal of this show is that it actually spans quite a wide demographic. No one ever said ‘Get rid of the swearing,’ or ‘Get rid of the sexual content.”

I remember that when I watched theatre as a youth, it was especially the theatre that was meant for adults that had the most impact, because they felt like they weren’t talking down to me. I could take that story and consider my own life in relation to it. For most performances, we have a talkback right after. I think this is really important, to now unpack what we’ve just watched and experienced together.

LS: What are your impressions of the way audiences are relating to the work from the talkback sessions
AM: Our talkbacks have been full of really thoughtful young people who I think are more engaged in this than we give them credit for! In every single talkback that we’ve had, the topic of feminism has come up, and in an interesting and provocative way.

LS: We’re currently in a time of increased awareness and action about sexual misconduct. Has this changed the way audiences are engaging with the play?
AM: There’s never been a more resonant time or a more perceptive time to be performing this particular story. I can’t imagine anyone could watch this show without considering what’s going on in the world right now. People feel they have the courage to finally talk about it and there’s public receptivity to that conversation. To belong to such a vital conversation that’s occurring right now is just fantastic. I love that this show can be used as a jumping off point and can add to the existing conversation that’s going on.

LS: How do you incorporate dance into the story to express things that are not so easy to articulate in typical dialogue?
AM: Dance, and particularly Indian dance in this play, acts almost as a placeholder for the cultural conversation that’s happening. When I say cultural, I mean specifically as it pertains to race and ethnicity and feeling this sense of otherness. That was certainly my experience in high school. I was one of maybe five South Asian teenagers at my high school.

Cultural appropriation is a really big part of the play. Right now, the thing we want to talk about is sexual accountability, but the play is also about what is the difference between appropriation and appreciation and what is that line. Why is it okay to like Indian dance but treat the people who inhabit Indian dance like garbage?

None of these things live in isolation. What we’re doing right now is we’re separating them and scrutinizing each individual thing, which is important, but eventually we need to put the picture back together and look at it with perspective from afar to say ‘how are these things connected?’ Ultimately it’s about how do we treat human beings with dignity and with the respect that they deserve? ■