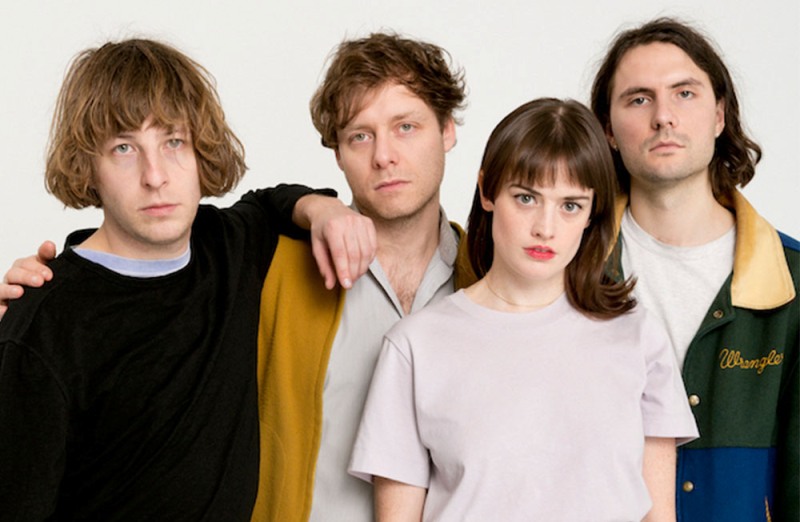 Never a band to play to expectations, TOPS left their native Montreal to write and record their third album Sugar at the Gate, a pop marvel coalescing old and new songwriting techniques.

I spoke to singer Jane Penny ahead of the band’s hometown show, part of a three-month tour across North America and Europe.

Owen Maxwell: Why did you decide to record out in L.A.?
Jane Penny: Riley actually couldn’t live in Canada anymore because he’s American and his work visa expired, so there was a practical component to it. We liked the idea that we could find a place and record in a house with a garage space, too — Montreal is mostly apartments and jam spaces. We had been practising in the Arbutus Records office and they were expanding it to be a community hub — there was a pirate radio station operating out of there — so it became more about finding a different space in which to do things as well as having a different headspace.

OM: Did the sense of space and just being away shape it as well?
JP: It opened up our minds. It was less distracting — having friends in Montreal, it would be weird to stay in and get work done all the time and not go out. It’s interesting because people bring up Montreal vs. L.A. but our decision wasn’t a criticism of this city. It was more where we were in our lives, and we’re all back in Montreal now. It’s cool that the record has this certain symmetry — we made the whole album in Glendale for all of 2016 when we lived there. It’s the closest thing to a concept record that we ever made.

OM: Why did you guys think the title Sugar at the Gate fit the album so well?
JP: It’s nice to have a bit of a cryptic album title, because sometimes people just use a song. Even songs like “Dayglow Bimbo,” which is the heaviest track that we would make, isn’t necessarily that confrontational. It’s more of a wink, and sticking to how the lyrics on the record are more elusive and complex than they might first appear. Within our songs we’re talking about everyday things as well as love and sex and relationships so it has that double-purpose: it’s observational and emotional at the same time. And when we came up with (the title), it reminded me of the gate in Mr. Burns’s mansion, with a big pile of sugar on the other side and flies flying around it. It was a funny image.

OM: Why have you guys held strong to self-producing over the years, and what do you think you might lose otherwise?
JP: A lot of bands get the opportunity to work with producers. But for us, when we’re not touring, David and I have always made recordings on computer together and separately. It’s just kind of what we’re doing when we’re not playing shows: We rehearse and then we work on recordings — it feels like our job. I understand why people (use producers) but to me it seems like a pretty strange thing to outsource. At the end of the day your recordings and your records are the most indelible, ever-lasting mark of whatever you’re trying to do. When you’re doing it yourself, you can take the time that you need to and be as experimental as you need to be. The idea of working with someone on what TOPS sounds like or how another person would be bringing an idea of what we sounded like in the past, rather than defining what you’re doing yourselves? I’m very supportive of the idea that there’s people with a lot of technical knowledge and skill, but for TOPS it works better to bring those people in at the mixing stage rather than creatively. I think records really benefit from good mixing processes. We worked with Chris Coady on the mix and he really brought out the recordings in the best possible way.

OM: I find there’s always a unique feel across your records. When it comes to your and David’s writing styles, how do they each stand out?
JP: One thing I could say is I feel like David’s songwriting approach is more classical than mine. Out of everyone that I’ve met, he’s a real hit-maker, and he makes super memorable songs. I’m always just interested in diversity in the lyrics and incorporating my own experiences into things because I’ve always loved pop songs but I’ve always felt like an outsider. Women’s voices are often used in service of this more anonymous style of pop music. It can be a good combination, having these songs that are really composed but have these elements that are more abstract and strange. ■