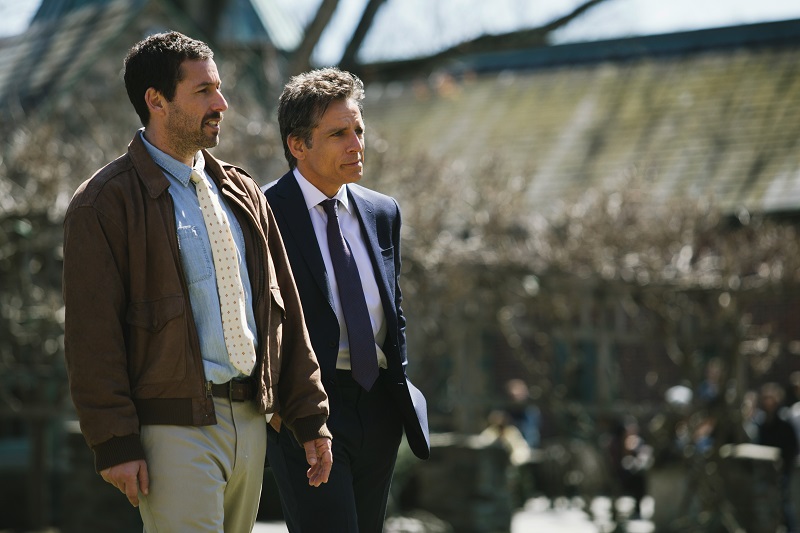 Adam Sandler and Ben Stiller in The Meyerowitz Stories.

I think that at this point we have all come to terms with the fact that Adam Sandler can be a great actor. This should have been obvious when he turned in a great performance in a truly shitty movie, Jason Reitman’s Men, Women and Children. We’ve always been under the impression that Sandler only tried when the project was good — but that particular tin-eared meditation on sex in the time of the Internet wasn’t good, even if we all hoped it would be. Sandler, though — he was good.

So I guess the question these days is more: why does Adam Sandler continually make shitty garbage when he has proven time and time again that he can actually be good? It’s not like the roles are usually that different — even in a drama, Sandler won’t be playing megalomaniacal CEOs or bank-robbing hillbillies or milquetoast fashion designers. He’ll be playing a middle-aged guy from Brooklyn who’s prone to fits of rage and probably plays a song or two that he tackles with a silly but also weirdly earnest voice.

In his bad movies, Sandler’s characters are always super rich and successful despite never doing anything; they nearly always have a hot wife and dumb children they hate and friends they’d much rather spend all of their time with, except for the movies in which all of the above is true but they don’t have a wife because the point of the movie is to find Sandler’s character a wife. They’re usually bullied by some more masculine figure but prone to bullying themselves; they’re almost always kind of miserable even if their entire lives are handed to them on a platter.

In his good movies, Sandler is always a loser. He plays a character who has been dealt a shit hand — sometimes through no fault of their own, but not always. They’re characters with unfulfilled potential, or worse — characters that had very limited potential in the first place and managed to blow it. They’re always sad and kind of broken and overly angry at the world, but the viewer always manages to find compassion in their outbursts.

The key to unlocking the supposed mystery of why Sandler is only good sometimes encompasses both the bad and good spheres of his work. The good work does not exist without the bad; the bad movies cannot even exist without the humanity of the good ones. In real life, Sandler is likely more like the characters in his bad movies; in his heart, however, I suspect Sandler still sees himself as Danny Meyerowitz.

Danny Meyerowitz is not even the lead character in The Meyerowitz Stories, the new Noah Baumbach movie premiering on Netflix today — there isn’t really a lead character, though it’s Danny’s soul that permeates the film. A recently separated house-husband who’s about to see his daughter (Grace van Patten) off to college, Danny hasn’t worked a day in his life. He doesn’t really know how to exist if it isn’t to raise his daughter, and her departure has brought him back into his father’s life. Harold Meyerowitz (Dustin Hoffman) is a sculptor who has never really broken out in the art world, though he has managed to carve out a niche as a teacher. He’s married to Maureen (Emma Thompson), a much-younger Earth Mother type with a drinking problem and a tendency to grandstand. Harold is also constantly obsessed with the world’s evaluation of his work in the light of his old friend LJ’s (Judd Hirsch) success and forever picking favourites amongst his three children.

Baumbach breaks his film up in chapters, a literary affectation that usually doesn’t do much except outline the fact that movies and literature are indeed two different mediums. Here, however, it allows each character to develop independently of the rest. It takes at least 40 minutes of hearing about Matthew (Ben Stiller), the prodigal youngest son, before we actually see him. Matthew’s very existence wears heavily on Danny, who is constantly reminded of his inferiority compared to his uber-successful, L.A.-dwelling half-brother.

The Meyerowitz Stories eventually settles into a more conventional all-families-are-psychotic dramedy as Harold falls sick and the brothers’ carefully curated inferiority complexes come crashing down, but it’s Sandler’s Danny that sets the tone.

Perpetually clad in a leather jacket and cargo shorts, hobbling around on a bum leg and prone to Sandler-like fits of rage (though Baumbach always cuts mid-blowout, as if he’s conscious that we’ve seen this before), Danny is less the classic loveable loser and more of a quietly tragic figure. His resentment has blinded him to the fact that not a single Meyerowitz is happy, least of all the older sister Jean (Elizabeth Marvel), who has become so used to being passed over and ignored in the Olympics of selfishness that the men in her family are competing in that she has essentially developed anonymity as a coping mechanism.

Baumbach’s films — or at least the ones not written by or starring Greta Gerwig — are often accused of showcasing entirely neurotic and unlikeable characters being dicks to each other for the duration of the film. It has turned Baumbach into an acquired taste for some, and certainly The Meyerowitz Stories falls in line with the rest of his films in their depiction of relatively privileged white men whose major life problems reside mostly in an inability to get over themselves long enough to see the bigger picture.

But I also think The Meyerowitz Stories is Baumbach’s most heartfelt film yet (at least, with the recurring caveat that his films with Gerwig sort of stand apart from the rest of his work), one where the inherent cynicism makes way for some kind of understanding and reconciliation. It’s also more ambitious and more human in its exploration of family dynamics, less dependent on Baumbach’s skewering of a certain arty navel-gazing character type.

A lot of it has to do with the performances. Sandler is, as I’ve already mentioned, the emotional and moral anchor of the film, but Hoffman also gives one of his best performances in years and years as the self-indulgent chatterbox of a patriarch. Harold is, in the grand scope of things, not much more than a doddering old sculptor with a house in Manhattan that everyone wants to get their hands on. He is not the narcissistic monster that his kids necessarily make him out to be, but he’s the only dad they’ve ever had, and he’s not cutting the mustard. Stiller is tasked with a more conventional character — one not that far removed from the ones he played in While We’re Young or Brad’s Status — but it only goes to show how good Ben Stiller has become at playing these immaturely mature men these days.

As long as there will be middle-aged male filmmakers working out of New York, there will be films about the plight of the average Manhattan (or Manhattan-adjacent) upwardly-mobile artist. What The Meyerowitz Stories lacks in an original point-of-view it more than makes up for with humour and sharp observational wit. For the first time that I can remember, there isn’t an obvious Baumbach surrogate here to guide the action, which gives the film a lot more juice than the old-man-yells-at-clouds nature of While We’re Young. More than that: it’s actually genuinely affecting.

About 20 minutes into the film, Sandler and van Patten sit down at a piano and bang out a song they wrote together when she was a child. It’s not a particularly complex song, and it sounds more or less like one of the myriad of silly Sandler-voiced ditties we’ve heard for the last 25 years. It almost made me cry. ■

The Meyerowitz Stories is on Netflix as of today, Friday, Oct 13. 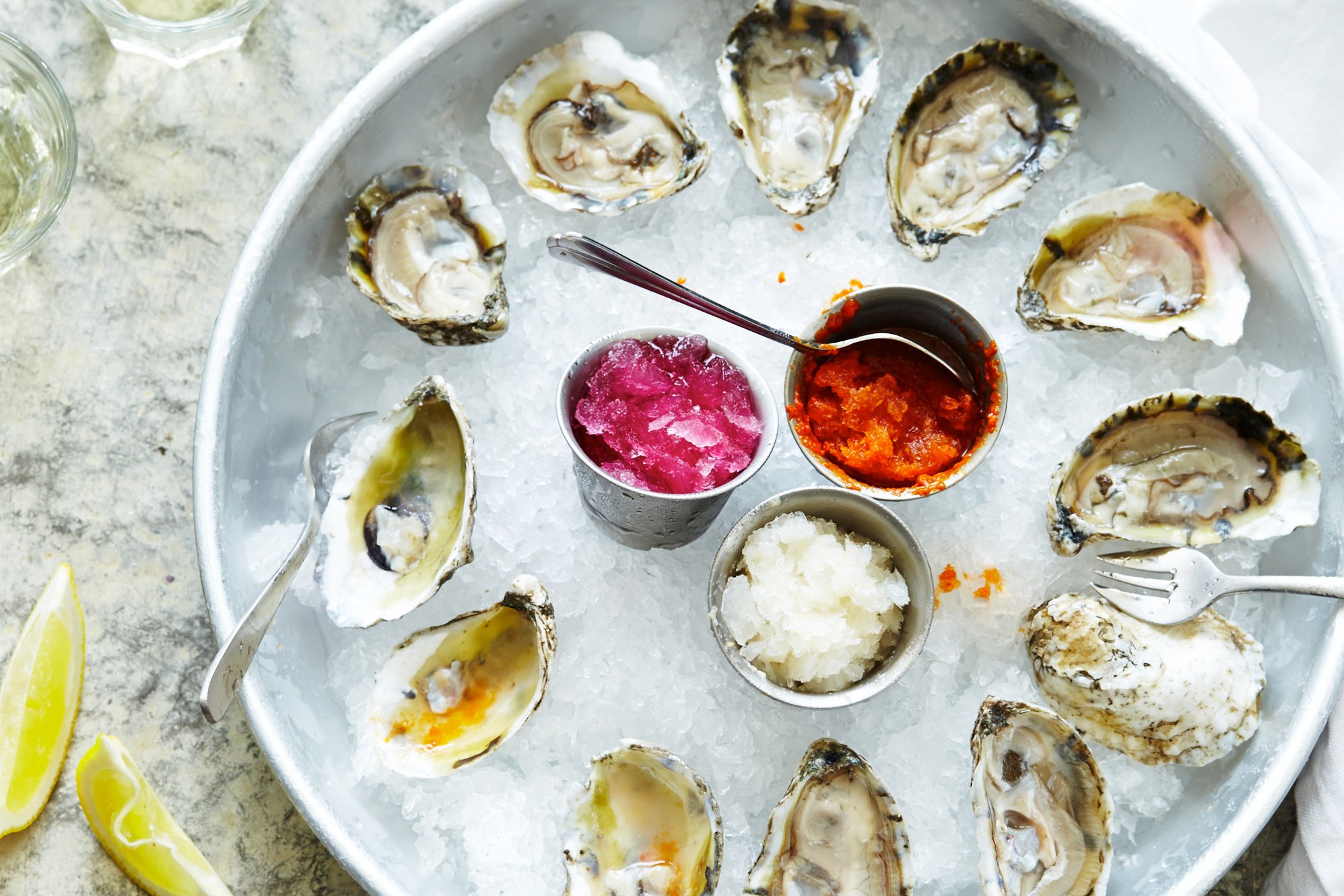 The best events happening in the city, daily.