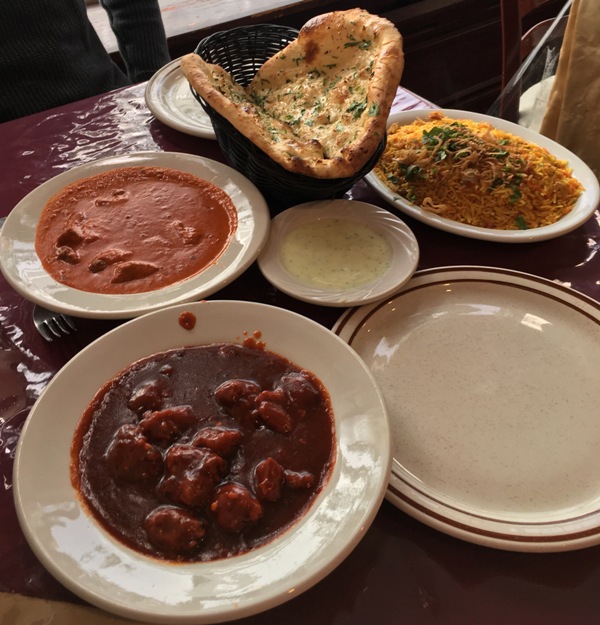 Fusion food has become a bit of a negative term recently. Restaurants featuring “Asian” cuisine, or diners with signs announcing “cuisine grècque, italienne, canadienne, chinoise” seem inauthentic or outdated in today’s world of regional and sub-regional ethnic food. There is a distinction to be made, however, between the more deliberate efforts to mix cuisines of different origins, and the unique combinations that occur over long periods of time as cultures blend through immigration or shared history, like the Desi Chinese cuisine at Restaurant Salateen.

Originating in the Hakka Chinese communities of Kolkata and Mumbai, Desi Chinese cuisine features well-known (and less well-known) Chinese dishes adapted to the Indian palate. Just as Chinese-Canadian or Chinese-American food varies from the food that would be eaten by families in China, Desi Chinese is its own world, and a fascinating example of cultural diffusion and globalization. Far from being a novelty or gimmick (ie. gourmet sliders, sushi pizza), Desi Chinese has been evolving for over a century. Much like pasta has lost its exoticism for anglo or franco Canadians, it is part of the everyday diet of many Indian families.

Easily overlooked in the mass of Indian restaurants on the Park Ex stretch of Jean-Talon, Salateen has well-prepared versions of the standard Indian curries — butter chicken, saag, korma, jalfrezi etc — but also fried rice, general tao and chow mein, prepared with cumin, turmeric and coriander seeds, spices more often associated with Indian food. The Desi Chinese dishes have their own page on the menu, so they’re easy to identify.

My approach is usually to get one dish from each food culture, and a plate of rice or garlic naan to soak it up. You could also start with samosas, pakoras or hot and sour soup. Complementary salads with a yogurt-based dressing are served while you wait.

The biryani rice with fried shallots and coriander is an excellent choice of accompaniment for the main course. The Indian spices in the various fried rice options make these stand out from everyday Chinese buffet renditions; the flavour is richer and more nuanced.

The Manchurian chicken is a Desi Chinese invention, a sweet Indian curry where the garam masala is replaced by soy sauce. The Chili chicken is another specialty, consisting of battered and fried chicken with chopped hot chili peppers in a soy sauce marinade (you might want to avoid this one if you don’t like spicy food).

The Desi dishes are available in chicken, beef and seafood, so choosing lamb or vegetarian on the Indian side of the menu is a good bet for variety. If you’re not in the mood for curry, the restaurant also has a variety of tandoori dishes, including the elaborately presented tandoori mix grill sizzlers that emerge constantly from the kitchen on piping hot cast iron plates.

The portions here are generous and quite affordable — one person can have enough food for takeout leftovers for under $25. Salateen is an even better option for groups, as you can order a large number of curries and dishes to share. Delivery is also available via phone, Uber Eats or Foodora. ■

“Reconciliation calls on all of us to confront our past, our biases and actions, and commit to an equitable future.”

For a limited time, Lawrence is taking over Larry’s to serve seven-course, prix-fixe dinners.