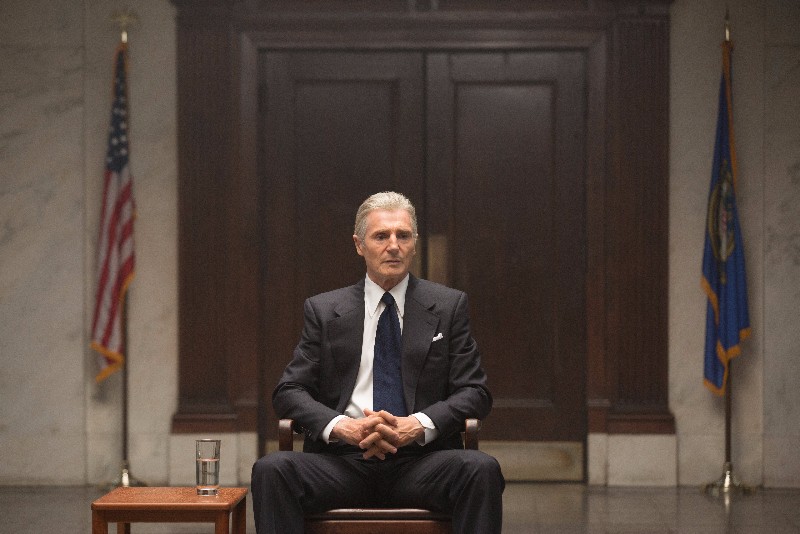 Most people knew him — without really knowing him — as Deep Throat, the informant who blew open the Watergate scandal. Peter Landesman’s Mark Felt: The Man Who Took Down the White House chronicles Felt’s (Liam Neeson) time as the assistant director of the FBI. After the death of J. Edgar Hoover, Felt watches powerlessly as the role of director is handed over to the inexperienced L. Patrick Martin (Marton Csokas). Worried about what that means for democracy, Felt begins secretly leaking information to the press. This put an enormous strain on Felt’s relationship with his wife Audrey (Diane Lane) as well as his grown daughter (Maika Monroe), whom Felt suspects has run away to live on a commune.

Landesman, a former war correspondent turned director, quickly draws parallels between this film and his previous effort, Concussion, as well as his work on the field. “A lone wolf, a single truth-teller in the wild has always been attractive to me,” he says. “Even when I was a correspondent, I would always shy away from the hotels and the groups and wander off by myself. That cuts both ways — it’s more interesting to get stories that no one else knows, but it’s also lonely, dangerous and scary.”

For Neeson, the story of Mark Felt was not a familiar one. “I knew very little about Mark Felt other than the broad outline of what Watergate was because I was brought up in Ireland,” says Neeson. “We were going through our own troubles at the time, so Watergate was very, very low on my totem pole of life’s existence.

“There’s any amount of research you can do,” says Neeson when questioned about his approach to a real-life character like Felt. “Felt was four movies ago for me — I’m still shooting on something right now — so I really had to do my research all over again. (…) There’s amazing stuff to research, but at the end of the day, I have to tell Peter’s script, you know? As a performer, I’m usually fairly emotive — or I like to think I am — and Mark Felt was almost unreadable. Professionally, he had a screen over himself, you know? But when he was at home, he adored his daughter, he adored his wife! And that had to be a taxing relationship for her.”

Landesman was also attracted to this aspect of Felt’s personality, and the fact that he apparently first acted out of spite for being passed over for the role. “Nobody does anything for one reason,” says Landesman. “That’s just not what human beings are as creatures. He mostly wanted to protect the FBI from what he saw as a corrupt influence, from someone who was going to use the FBI’s influence as a weapon. And he was right about that! There were the issues going on with his domestic life as well as his displeasure with the Nixon administration and the men who made it up because they were corrupt, grey liars. Yeah, he hated all that, but mostly he wanted to protect the thing that he was made to run.”

Landesman’s three films (his debut was the JFK assassination film Parkland) are based heavily in real-life events, and he has always focused his attention on detail in a way that betrays his past as a journalist.

“There’s the filmmaker in me and the journalist in me, and one protects the other,” says Landesman. “I knew that the film would be held up to scrutiny, so I wanted to make sure that the journalism behind the movie was really correct. You know, Mark’s book didn’t reveal him as Deep Throat. He kept that quiet and was probably prepared to take that to his grave. My information about this man and what happened really came from two sources outside the book. One was the FBI agent that Tony Goldwyn plays — he probably knew everything. The first thing he said when I walked into his house is that Watergate’s a love story. He understood that Felt was driven as much by his wife and his daughter than by what was happening with the Nixon administration.”

The film, of course, has taken on increased relevance in the last few months — some might say it almost feels quaint that one man could even take down the White House when faced with the current political landscape.

“I wrote this movie eight years ago and I made it a year ago,” says Landesman. “I wish I could tell you it was all by design. But what it does say is that history repeats itself. Human behaviour does not change. Powerful, greedy men don’t change, and men with integrity don’t change. That narrative and that dynamic will always appear, given the right stew of events. The coincidence that it’s happening now is supernatural.” ■

Mark Felt: The Man Who Took Down the White House opens in theatres on Friday, Oct 13.