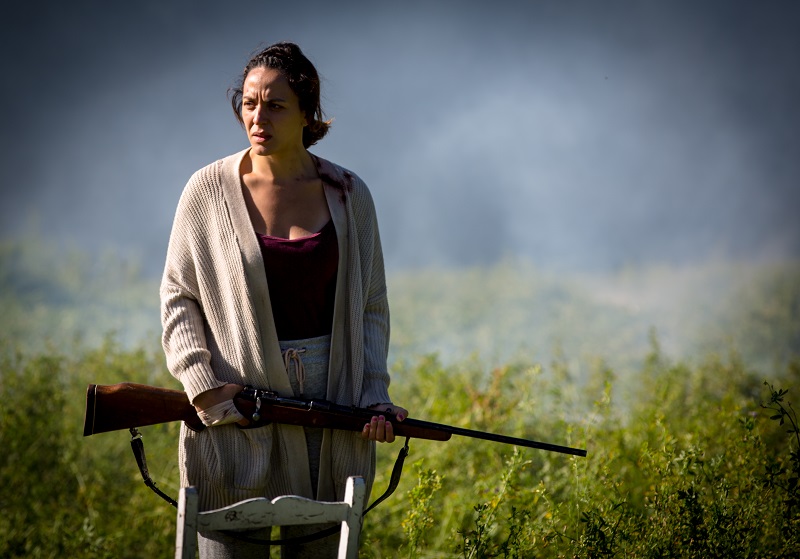 Robin Aubert’s Les affamés is a zombie movie. Homegrown genre films are few and far between – and often relegated to a very limited run. Aubert’s film, however, has already traveled. It screened at TIFF (where it won the prestigious Best Canadian Film prize), Austin’s Fantastic Fest and at Sitges in Spain. This is doubly impressive considering the film is very much a Québecois product – a rural, joual-filled zombie that’s both gory and lyrical.

“We see it as something that belongs to others,” says Brigitte Poupart, who plays the revenge-driven Céline in the film. “Hollywood looms large – they have bigger budgets to make this kind of movie. Look at Denis Villeneuve: he went to Hollywood to make science-fiction movies. We can’t make those kinds of movies here; we’ll never be able to. It’s sad, because we definitely have the potential, but it’s as if it doesn’t belong to us. There’s this kind of timidity, this kind of shame – we just take it for granted that the Americans will do it better than us. What I think is so wonderful about this movie is that Robin totally accepts that. The heroes are women, he shot it in his hometown – he really adapted it to Québec. Literally!”

Marc-André Grondin stars as Bonin, one of a handful of survivors attempting to make a go of it in the Québec countryside after a mysterious force turns everyone into the flesh-craving undead. Bonin soon teams up with Tania (Chokri), a city dweller with an untrustworthy bite on her hand (she claims it came from a dog) and Zoé (Charlotte St-Martin), a preteen girl whose family has already turned. Roaming the countryside with the ravenous undead nipping at their heels, they eventually find three other survivors (Marie-Ginette Guay, Poupart and Micheline Lanctôt); together, they represent the only possible hope – and it’s very slim.

“It has the codes of a zombie movie, but it’s not really a zombie movie,” says Monia Chokri. “It’s more like there’s a pandemic – that’s why they’re called “les affamés”, in fact. The idea is that there’s some kind of virus – this is what Robin said, by the way, not just my interpretation – and people sort of lost their mind. It’s an illness that created a sort of insanity.” 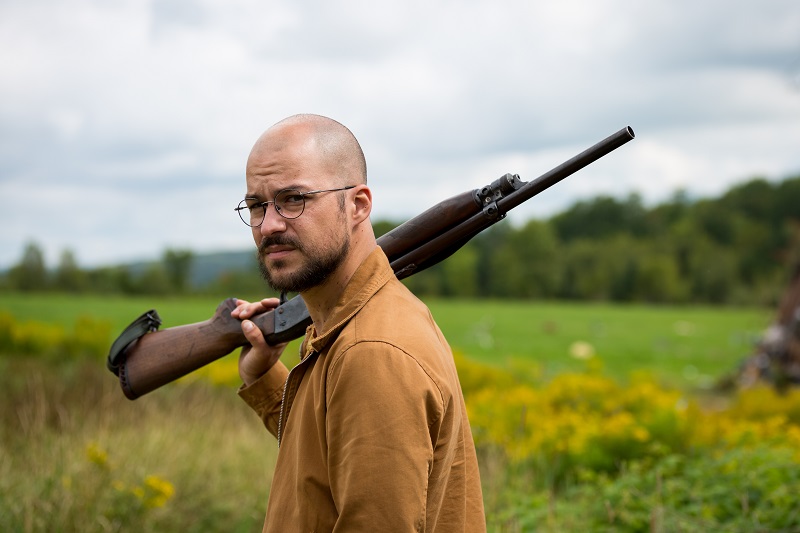 “I’m always picky on the script versus the director,” says Grondin of choosing this particular genre film. “I could really like a script, but when I meet the director I get the sense that the final product won’t be what I’m expecting from reading the script. It’s the same thing for a genre movie; I’m even a little bit more guarded since it can pretty easily fall into B-movie territory. That makes it a little more reckless. There are also much less genre films coming out of Quebec, so they can really let you have it if one doesn’t work. But it’s certain that the second I knew Robin wanted to work with me, I was pretty much sold. He’s a great actor and a really interesting director, so I thought to myself that even if the final product wasn’t good, it would certainly be interesting. I saw he had a different idea about how to tell a zombie story. In the end, his film is definitely a zombie movie, but he didn’t shoot it like one. He shot it like an arthouse movie.”

What sets Les affamés apart from the typical slice-and-dice of your average B-grade zombie movie is Aubert’s eye for the naturalistic. Even though his zombies run (a major pet peeve of zombie fans, apparently) and howl in pain (which is surprisingly disturbing), the film feels like it could actually happen.

“I think it helps that we’re not there slashing heads off every two minutes,” says Grondin. “The more heads you see explode, the less it affects you. If you only see one head explore, it creates a shock. When Monia’s character shoot a zombie in the face in the back of the pickup truck, we don’t all cheer and high-five. She’s traumatised! We tried to play it as realistic as possible, which I think gives it a different vibe.”

“The movie exists in a state of constant fear and expectation of zombies,” says Poupart. “But my character goes directly towards them. The others are afraid, but I charge at them. It’s really a different element to the rest of the film; she’s a kamikaze! She even says it in the film: there’s no way out. There’s no hope. I have nothing to lose – that’s it. It’s a lot of fun to play, because it’s not something you often get to play as an actor.” 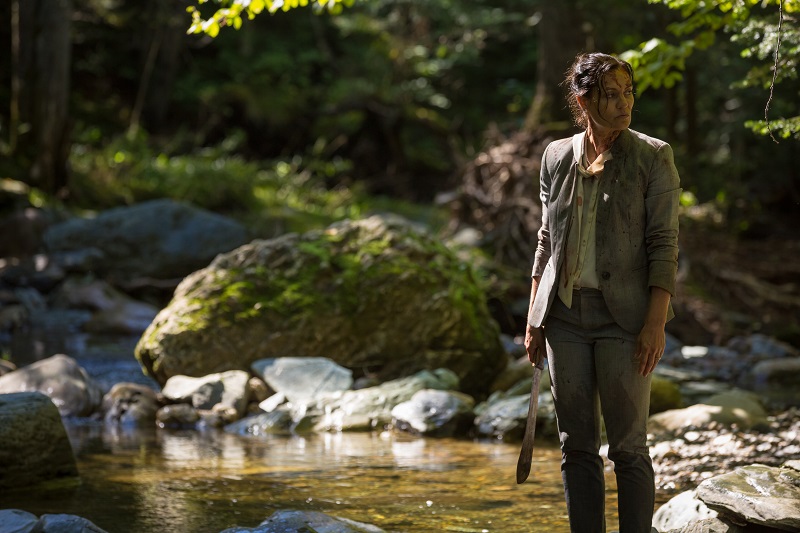 Aubert is probably best known to audiences for his acting roles – from the time he logged on mainstream TV series like Radio-Enfer and 4 et demi to working with iconoclasts like Robert Morin (Le neg’) and André Forcier (La comtesse de Bâton-Rouge). I asked Grondin – who had just come from working with another actor-turned-director, Jay Baruchel, in Goon 2 – whether or not he sees a difference working with directors that have an acting background.

“Robin and Jay are so different that it’s hard to put them in the same category,” says Grondin. “Jay’s a director in his soul. He’s more comfortable directing than he is acting. Robin doesn’t really own up to his acting persona or his directing persona. He acts like he’s not a very good director of actors, but he is; he set the perfect mood for the movie he wanted. (…) He created an ambiance, which I’m not sure he really realized. He has his own way of working that sets him apart from nearly everyone I’ve worked with. He feels like he’s just doing whatever – or at least he tells us he feels like he’s doing whatever – but he really isn’t. It’s extremely calculated.”

“Robin knows what he’s doing,” says Poupart. “He knows exactly what he wants. His instincts are incredible. Obviously, he knows the mechanics of acting, but he also knows how to communicate what he wants from you. He understands the medium of cinema. As far as I’m concerned, the main problem we have in Quebec cinema is that it starts to look a lot like what we do on TV. Everything is overwritten and overexplained. Robin makes cinema.”

“I think the truth is found somewhere in between,” says Chokri. “Robin does have this tendency to present himself who doesn’t really belong there. It’s a defense mechanism that many people have – to present as lower than they actually are, in order to impress us with what they actually accomplish! (laughs) Robin does it unconsciously, but when you get to set it’s very clear that he knows what he wants. He has precise images in mind and he’s a very smart, very cultured guy.”

One recurring thing that comes up when I interview people who act in horror films is that the physicality of a horror film is very different from most other genres. It’s physical, but it’s also heavy on the make-up, caked-on blood and screaming. According to the cast of Les affamés, however, they’ve seen worse.

“I didn’t feel it as much on this shoot,” says Grondin. “When I made 5150, Rue des Ormes, it was pretty heavy. I spent my days yelling and punching stuff. I had just shot 50-something days of 20 script pages a day on a TV series, so when I showed up to set, I found it pretty light. Of course, running across a field carrying a rifle and a little girl is physically taxing, but I needed the workout! (laughs) I can’t really complain about three minutes of running in a day. (…) I had it easy compared to others. Brigitte had it the toughest, I think.”

“I didn’t find it difficult,” says Poupart. “I love action movies. I used to be a dancer, I’ve always been very physical. I got in shape to make this movie, because it was very physical – but it wasn’t difficult. It was the opposite, actually. It was very gratifying to express myself physically for once. In Quebec, we love words. But this movie’s strength lies in the fact that we don’t explain everything with words.” ■

Les affamés is in theatres Oct 20. Watch the trailer here: