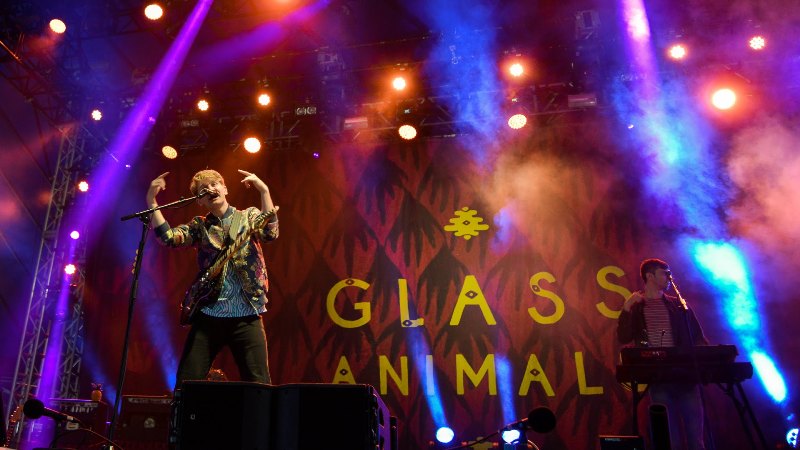 British rockers Glass Animals had unfinished business in Montreal. This past summer, they were one of the bands nearly washed out during Osheaga’s infamous rainy Friday. Even worse than not taking the stage at all, they tried to persevere through it and damaged their waterlogged samplers. Festivalgoers ended up with a three-song, 12-minute set that only hinted at what the quartet can do on stage.

Tuesday night at the recently rechristened M Telus (feel free to call it whatever you want), the group had no weather issues to deal with. The house was packed — one of the loudest the venue has seen in a while and enough to stop the awestruck band on multiple occasions. Their second album, How to Be a Human Being, isn’t tearing up the charts, garnering radio play or even racking up the streams, but at least in Montreal, they have around 2,400 rabid fans who can belt out the best food-based lyrics since Weird Al Yankovic: “My girl eats mayonnaise/From a jar when she’s getting blazed” and “I’d say I told you so but you just gonna cry/You just wanna know those peanut butter vibes.”

As far as nerdy British bands with samplers and myriad influences go, Glass Animals are infinitely more fun than the dreadful/dreary Alt-J and comparable to the defacto godfathers of the movement, late ’90s/early aughts critical darlings The Beta Band. Frontman and guitarist Dave Bayley has an entire arsenal of awkward b-boy stances to go along to their groovy, soupy songs about stoners and sustenance. Drew MacFarlane and Edmund Irwin-Singer (doing his best Alex James impression on bass) alternated between instruments and keys/samplers. Sometimes it was hard to tell where sounds were coming from, and if there were any overdubs, but it didn’t dampen anyone’s enthusiasm. It’s Britpop with hip hop backbeats — nothing revolutionary, but a double dose of infectiousness when done properly. These guys have their style down pat.

And then there are the pineapples. They’re everywhere at a Glass Animals show: from the merch to the lyrics (“pineapples are in my head” could be heard shouted from the crowd long before “Pork Soda” was played during the encore), to a giant gold pineapple disco ball hanging overhead and a real one that got placed on stage before the band came out in ceremonial fashion. The show was a visual spectacle, with illuminated band initials and an oversized cathode ray television set similarly blasting neon stimuli into the audience. There’s no deeper meaning to the inclusion of the spiky fruit, at least one wasn’t gleaned from the show, but as far as a branding exercise goes, it was simple and effective. Their music, full of oddball twists and turns and catchy synths, was as deliriously colourful as the visual setup. It almost felt like a chiptune show at times.

Based on Tuesday night’s show, Glass Animals have made their mark on our city even though this was their first headlining, non-fest show here. Somehow they’ve amassed a dedicated Montreal fanbase without really planting any roots, but it’s clear they won’t underestimate us ever again. ■