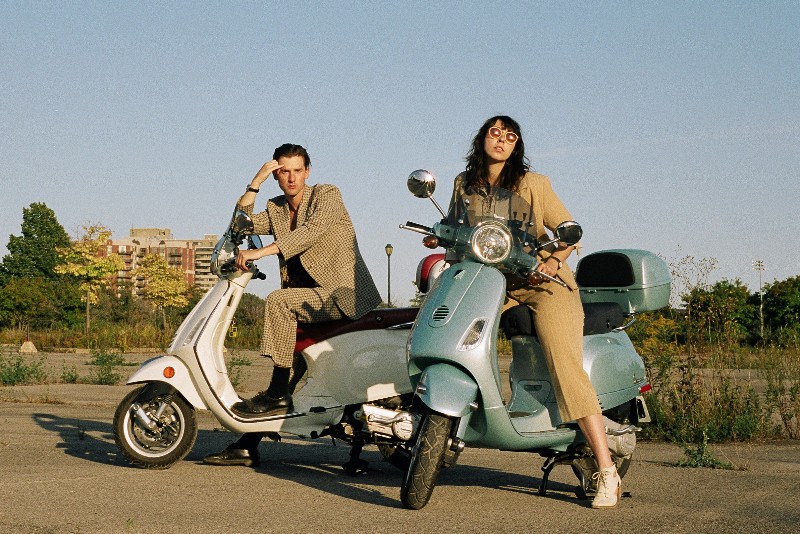 Blue Hawaii’s first full-length album in four years, Tenderness, is the sort of release that sounds good coming from a smartphone speaker while walking down the street. That’s because it was made that way.

“That’s how we picked the first single, ‘No One Like You,’” explains Raphaelle “Ra” Standell. “We were walking on Laurier to Kabinet for a cocktail and we thought, ‘Which song do we feel most comfortable about playing on the street on our iPhones holding it next to our ears?’”

Standell and bandmate Alexander “Agor” Kerby (according to press release – he used to go by Cowan), mixed the album with phones in mind. But also laptops, portable Bose speakers and even old fashioned fancy sound systems. They wanted Tenderness to reflect the many ways we consume music.

Although the album may be rooted in how technology and relationships intermingle nowadays – check the excellent and apropos album artwork shot by Arvida Byström, herself an Instagram sensation – the band itself remains a firmly in-person thing. Their previous album, 2013’s Untogether, resulted in not only the dissolution of the group, but of Standell and Agor’s longtime romantic relationship.

“We split and had to take a couple of years apart,” Standell says. “I went back to doing Braids, while Alex was doing his own thing in Berlin, and then he moved to L.A.”

Standell then spent some time in Los Angeles, which was where they reconnected – as friends and musical collaborators.

“I was planning on doing my own solo stuff in L.A., which is something I’ve always wanted to tinker around with, and then we started hanging out and doing a little jamming. The first jam went really well, I think we wrote ‘Do You Need Me’ right away, which is a slow one with strings,” she recalls.

Tenderness began in Los Angeles, but eventually moved to Agor’s family bungalow in an undeveloped part of Whistler, British Columbia. The final steps were done in Montreal.

“The way in which we make music has never been done long-distance. We always try to get in the same room,” Standell says. “That being said, a huge part of our relationship has always been done online. The iPhone came out about two years into our relationship and we were talking a lot online. I then had a relationship with another musician who was far away and I was far away, we spent a lot of time talking on the phone.”

Although the music itself, thanks in part to Agor’s DJing touch and instincts for creating energy and grooves, feels like a carefree ’90s dance party at times, Standell explores lyrically how different a relationship can feel when the intimacy is being communicated primarily through a screen.

“Because we all have the ability to go back and look over our messages, it’s like a little portrait of a relationship we can scroll through,” she says. “I really felt like I had a mask on when I was on my phone. I wasn’t really myself. I notice that in a lot of forms of communication now, and I wanted to write about it with that realization that came to me in L.A. very intensely when I was in a long-distance relationship that came to an end.”

Phones and relationships appear in obvious forms on the album, such as lyrical themes and artwork, but Blue Hawaii also included a few easter eggs: a voicemail message from an excited aunt, a field recording of the metro, as well as vocals and piano recorded via iPhone, transferred onto computer and then re-recorded on iPhone.

“When we realized what the thread of the record was, we wanted to have all those little traces on there,” Standell says.

Otherwise, the music on Tenderness can feel a little more upbeat than Untogether. They would get up from their computer chairs during their recording sessions and test out how danceable their new compositions were. If it made their butts go back and forth, explains Standell, it was probably a good sign they were headed in the right direction. They were making kick-drum-heavy songs, and as such needed to elicit some sort of physical reaction.

Tenderness also puts a cap on what’s been a resurgent 2017 for local imprint Arbutus, who have had one of their busiest years yet. Other acts on the label, especially Moon King and Mozart’s Sister, have also taken inspiration from ’90s deep-cut dance and included it on their records. It’s perhaps a sign that Arbutus, which began in Montreal’s afterparty scene, has never truly left its loft roots.