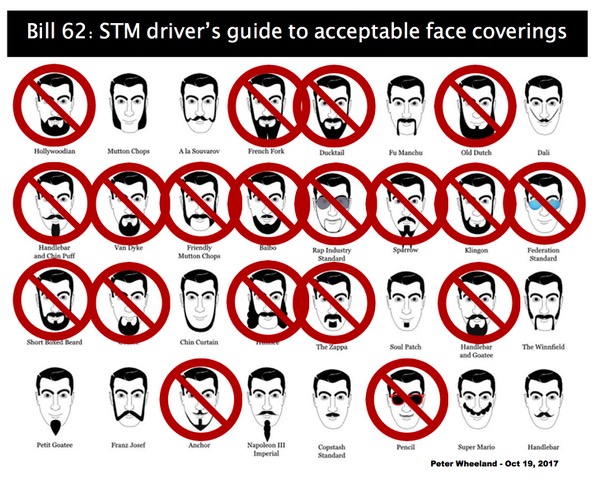 To be honest, like many of you, the adoption of Bill 62 caught me completely off-guard. As political strategies go, this is the stupidest idea the Couillard Liberals have come up with — and that says a lot. I thought it would be just another one of the dozens of bills that the Liberals have debated, amended, then withdrew once the LSD wore off.

For those of you just arriving from Mars, perhaps we should explain that Bill 62, which has been kicking around in one form or another since 2015, is a “religious neutrality” act whose main purpose is two-fold:

• Eliminate religion from any state services;

• Except when the religion is Christian.

Seriously. They’re not even trying to hide it. Section 13 of the law states: “The measures introduced in this Act must not be interpreted as affecting the emblematic and toponymic elements of Québec’s cultural heritage, in particular its religious cultural heritage, that testify to its history.”

So the Catholic cross stays up in the National Assembly and a gazillion public institutions — not to mentions thousands of towns, lakes and rivers — will continue to be named after Catholic saints. Because that’s not religion, that’s “heritage.”

But if one of the province’s handful of burqa-wearing women should attempt to use a public service like a bus, state neutrality is so threatened that the Couillard government wants her to either strip off her face covering or get off the bus.

“We are just saying that for reasons linked to communication, identification and safety, public services should be given and received with an open face,” the bearded Couillard told reporters. “We are in a free and democratic society. You speak to me, I should see your face and you should see mine. It’s as simple as that.”

It’s not, of course. We all receive government services every day from a largely faceless civil service. Try booking an appointment to meet your income tax assessors face-to-face and watch them panic. I mean hear them panic, because you’ll never see their faces.

Bare faces? They could be bare-assed and we’d never know it.

Bill 62 is a time bomb. And not a simple one where, if you snip the red wire, the clock stops. It has stirred up a climate of intolerance that many of us hoped had disappeared with the PQ’s Islamophobic Charter of Values. Once more, our government tries to exploit fear and prejudice against an insignificant religious minority under the guise of religious neutrality. The fact the the Liberal version of intolerance is softer and fuzzier than the PQ model doesn’t make it better, it makes it worse. The Liberals have now managed to normalize discrimination and once more put a target on the backs of all visible religious minorities.

Pulling a page from the Trump handbook, the Liberal government thinks it has played a clever shell game with the law. By allowing exemptions for religious reasons, but then adding provisions that ensure that those exemptions won’t cover niqabs or burqas, they think they’ve skirted provisions of the Quebec and Canadian charters of rights that govern freedom of religious expression. But like Trump’s three failed attempts to pretend that his Muslim immigration ban isn’t a Muslim immigration ban, the Liberal ploy will almost certainly fail in the courts, as it already has in public opinion. They have made their intentions clear as day, so trying to convince the courts otherwise will be a quixotic exercise in futility.

Meanwhile, however, the signal has been sent to the province’s xenophobes that it’s once more hunting season for not just the rarely sighted niqabi bus rider, but for women wearing headscarves and men wearing turbans.

Unions representing bus drivers have already said that they don’t want to be responsible for policing the attire of their passengers, but the law will encourage self-appointed vigilantes to challenge, harass and threaten anyone who doesn’t fit their vision of appropriate, secular buswear.

And justice minister’s Stéphanie Vallée’s ridiculous attempt to argue that the face-covering provisions aren’t aimed at niqabi but at anyone wearing ski masks or even tinted glasses on the bus just underscores how poorly the government is managing to hide its own face.