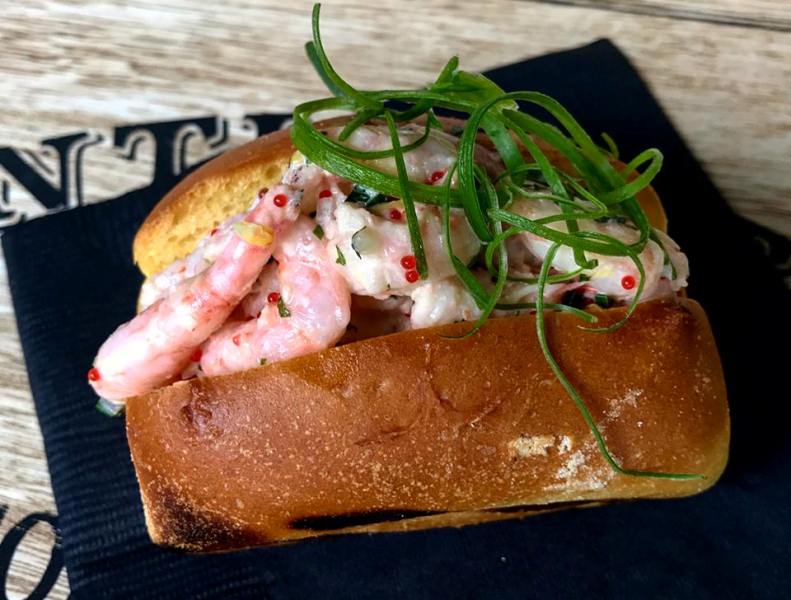 One of my very first exposures to the Montreal Canadiens was flaming cop cars nearly a decade ago, and that was after a victory against the Bruins. A year or so later, I was worried I’d get beaned in the head by a bottle during a night out after an embarrassing loss, but it seemed the city was trying to pacify everyone’s mood by putting Dixieland jazz groups on every second corner of Ste-Catherine. I guess that was the beginning of a slow and steady effort to rebrand the team, the city and to channel Montreal’s attitude toward hockey.

That rebranding seems to have extended itself into outright gentrification. The whole of downtown that immediately surrounds the Bell Centre now has branded multi-million dollar condos, an accompanying avenue named after the team and, now, there’s the massive sports bar 1909 Taverne Moderne.

At three storeys of 1,000 seats, a 46-foot screen and an additional 60 TVs, I had my doubts about what’d been billed as the largest sports bar in the country. Was the franchise extending itself too far, I wondered, by creating a gargantuan resto-bar that’s serving precisely what every other restaurant in the immediate area is serving? If you wanted St. Hubert, they’ve got chicken both fried and rotisseried. If you wanted a steakhouse with wine lists like Madison’s or Bâton Rouge, do you want red or white with your rare? And pub grub? Definitely no problem.

Corporate battles of public appeal via convenience aside, would the whole place be a disaster? 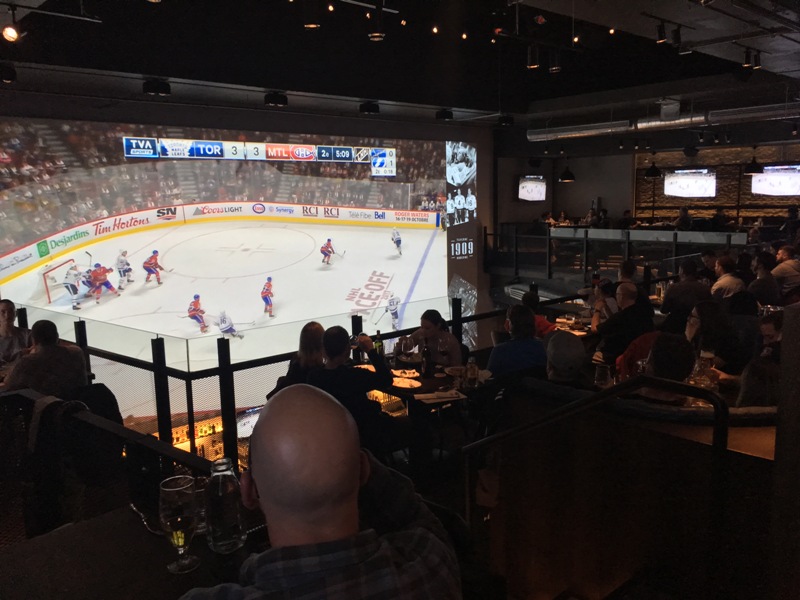 I imagined how much this place would resemble a stock market floor on a home game night, hungry and thirsty people clamoring for the attention of a small, headless chicken army’s worth of waiters, bartenders, bussers and managers over the deafening sound of air horns and AC/DC cranked up. Curious, I decided to put it to the test by grabbing an extremely apprehensive friend and hitting the place up during peak hours.

Now, for those of you who prefer a calm atmosphere to drink and eat during a game, this place isn’t for you. Don’t be fooled by its posh bar on the top floor; escalators (escalators!) take you down into the cavern of the second and third floors, where every manner of sound and light is in your face. However, if you want a place where you can scream at the top of your lungs between bites of a $150 tomahawk steak and glasses from a $320 magnum of Veuve Cliquot — there are plenty of cheaper options, mind you — in an otherwise upscale pub environment, this is undoubtedly your jam. Think Cage aux Sports with mahogany trim, industrial wall art, paisley carpeting and a wine cellar. Hockey kitsch? What’s that?

Given the amount of staff this place requires, it wasn’t long before we were seated after arriving. The only problem here was that we were scuttled off onto a corner of a bar. That’s normally no issue anywhere else, but try getting the attention of a hustling bartender pouring out 10 pints and mixing two cocktails for each plate of nachos. I can’t speak for the staff, but it looked like it was a red, white and blue form of service hell. There’s clearly power in numbers here, as you’ll have a server to yourself when coming in as a group of six or more.

As for the food, it’s a curious mix. On one hand, 1909 recruited Jean-Sébastien Giguère, a chef who earned his stripes at places like Toqué! and Au Pied du Cochon. On the other, the establishment is managed by Cara Operations, a national catering service doing everything from train and airline food to more recognizable fast food chains like Harvey’s. That implied a combination of a well-consulted menu with vacuum-packed sadness at 30,000 feet. Thankfully, it was more of the former than the latter. 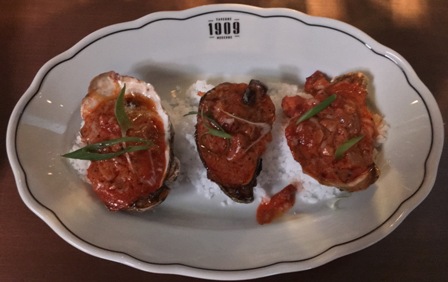 There’s certainly something for everyone when it comes to this place, and that includes concessions being made for vegetarians and vegans on certain dishes. Having had my fill of tartare, hamburgers and poutines lately, my friend and I opted to go for a few shared plates and main that seemed a little more deviatory from standard salted carb fare. We started off with baked oysters ($14 for 3, $26 for 6), a Bienville-inspired mix of bacon and shrimp bits in a “cream” sauce. Truth be told, a dousing of cheese would’ve saved them, as the shells were filled with a tomato (huh?) sauce with a few chunks of extra protein added in. While a nice snack, it would’ve been better if those shells were wiped down; grains of the plate’s salt bed clung to the bottom, making each slurp a little saltier than I’m sure was intended. 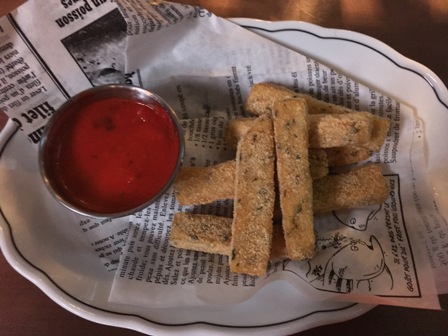 Next up were the polenta fries with pomodoro sauce ($7) and the arancini bolognese ($12). The fries may have looked as though they had herbs mixed in, but I couldn’t find their flavour, and perhaps they were quickly tossed onto the pass without being seasoned. As for their sauce, it was a pretty weak tomato mixture; I was curious why they had fresh basil on the bar for cocktails, but couldn’t be bothered to mix enough of the herb into the sauce. The arancini was a single, sizeable ball of deep-fried rice stuffed with mozza and topped with parmigiana-reggiano shavings and basil mayo, served on a shallow pool of pomodoro. Here again, the same issue of seasoning came up, as there wasn’t nearly enough salt in the rice and ground pork innards to make each bite worth it. After the sauce was used up, the rest was just bland. And the basil mayo? Barely there. 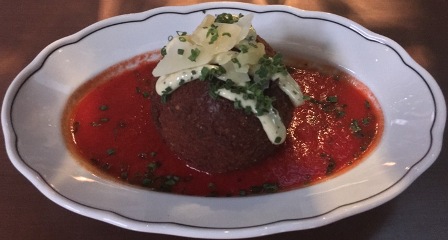 Wanting to try something different, my friend and I felt drawn to the lobster and shrimp rolls with a side of Caesar salad ($24 for two). The brioche bread itself was good, crispy on the outside and fluffy on the inside, with just enough protein. It was meant to come with sriracha mayo, fresh herbs and a teaspoon of roe, but that mayo was a faint aftertaste, if anything, that just made the last few bites soggy, and the only herb I could see and taste was chives — all in all, just satisfactory. As for the salad, the anchovies incorporated into its dressing made each bite too salty, and the thick-cut bacon chunks (two in total) were chewy, fatty cubes. Go for the green salad instead.

The Habs lost the game. I only know this because I checked the score later that night on my phone; my friend and I had finished our meal about halfway into the second period and decided we couldn’t handle the stimulus and frustration anymore. In all honesty, we would’ve stayed had it not been for the wait and bar staff being way too busy to hear us over the blaring noise. I’d venture we were forgotten about when they realized we weren’t drinking pints as often as they’d ask if we wanted another. That and they brought us the wrong order twice.

If you’re a raving fan with several bills to spare and few cares for high prices on what’s otherwise plain food, this place is for you. Otherwise, 1909 joins the roster of costly entertainments to live, breathe, clothe yourself in and eat the franchise. At least the beer’s cheaper in there than rinkside. ■