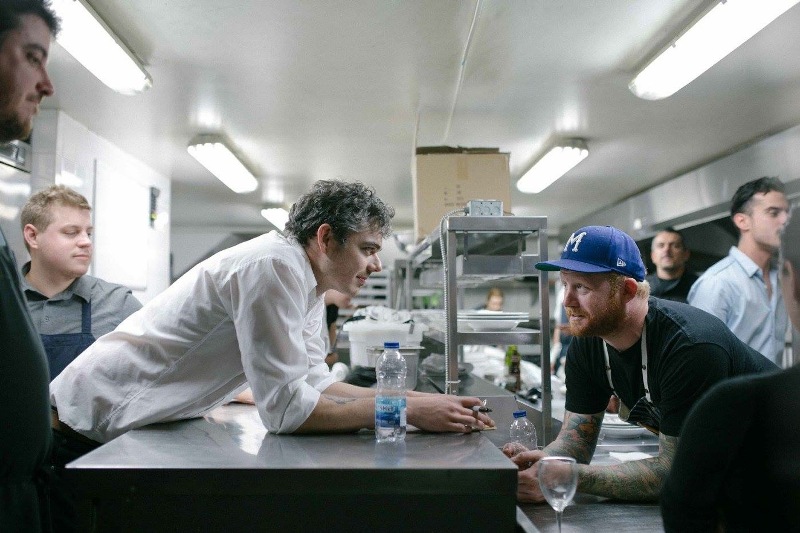 Every year, a team of chefs from some of Montreal’s most celebrated restaurants work together to prepare Soirée Mission Possible, a benefit dinner for the Mile End Community Mission at the Rialto Theatre. The Mile End Community Mission is a small organization that provides meals, as well a clothing bank, food trips and social outings to low income and vulnerable populations. Marc Cohen, head chef and co-owner of Lawrence, has been preparing monthly dinners at the Mission, and has been organizing Soirée Mission Possible since its inaugural edition in 2015.

A British expat, Cohen has had an impressive career that’s taken him from London’s pub kitchens to Montreal gems Club Chasse et Pêche and Sparrow, before co-founding and running the kitchen at Lawrence and its partner establishments. I spoke with him at Lawrence spin-off Larry’s about his involvement with the Mile End Mission and Mission Possible, and to get a preview of the eight-course menu for this year’s event.

Rob Jennings: Can you tell me a bit about the Mile End Mission as an organization?

Marc Cohen: They offer breakfast and lunch during the day. In order to use their services you have to be a member, which entails paying a dollar a year, kind of a token thing. A range of people use their services. There are definitely some homeless people, but also low income families… I think the thing about it is that you don’t have to prove your need in order to use their services… (In addition to) providing food, they have a clothing bank, they do food baskets sometimes and they organize social trips. It’s very much like a community, and I think while a lot of people rely on it for sustenance, it also provides a social environment for people who don’t otherwise have that.

RJ: How did you get involved in Mission Possible?

MC: [Mile End Mission director] Lou asked me if I would be interested in having an involvement with the yearly fundraising dinner. I asked a few friends who are also restaurant owners and chefs if they would be interested, and there was such an immediate and overwhelming positive response that it became clear that it should be a completely separate event. They have their smaller benefit dinner, but this is separate and I do most of the organizing.

Obviously the first year, I had no idea how the event was going to go. It was a lot of fun to have all those cooks and chefs together in the same kitchen. Everyone knows each other, everyone had a pretty good time. A lot of the servers and the sommeliers from those restaurants also came to help out. So you have this kind of dream team of Montreal restaurants making this super-restaurant for the night.

RJ: So, I guess you get together with all these chefs and you collectively plan a menu?

MC: It’s very difficult to get those kind of people together in a room. I would say it’s impossible! So every restaurant does one course and it’s a sit-down dinner. We try and weave it together to make a coherent menu, which is usually pretty doable. It’s nice that the different styles of the restaurants are reflected in the menu, but also it needs to tie together somehow and not feel like you’re eating in eight different restaurants. A few of the suppliers that we use contribute: Birri and Ferme des Quatre Temps donate vegetables, and [Poissonerie] la Mer donates oysters and fish. Then the wine importers that we use at the restaurants give a couple of cases of wine, so we have wine pairings for each course[…] The beauty of it is that there are quite a lot of people contributing something, and it ends up costing very little.

RJ: What kind of food should we expect for this year’s event?

MC: I’ve been really hassling everyone to tell me their final things! We’ve got oysters. Candide are doing something with broccoli, pollen and camelina, which I think is very much their style, kind of minimalist. Antonio Park is doing chicken okayu, puffed quinoa, wild rice, masage, corn salsa and urchins. Dalla Rose are making corn ice cream for the end, and me and Derek from Maison Publique are going to do something together with oxtail. ■

The third annual Soirée Mission Possible fundraising dinner will be held at the Rialto Theatre (5723 Parc), with performances by Camille Delean, Jeff Louch and Basia Bulat, on Monday, Sept. 25, 6 to 11 p.m.. Tickets cost $325 for the meal and wine, with a $225 tax receipt. A table of 12 people is available at the cost of 10 tickets.