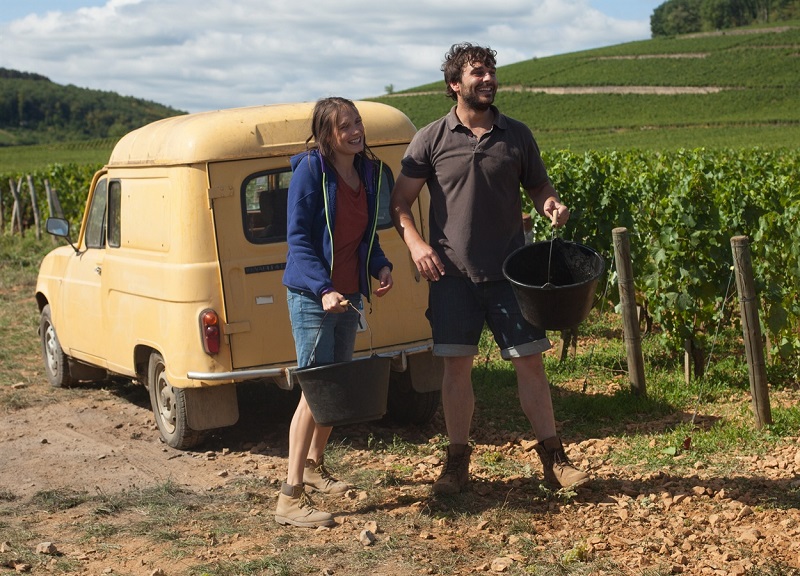 While watching Retour en Bourgogne, I had the thought that it may very well be the Frenchest movie of all time. The reasons for that are many, and almost all of them are dumb and reductive. The chief reason is that it is a movie about wine, and wine manages to be an extremely French.

But the French identity in cinema comes across in a myriad of ways – not all of which, I’m sure you don’t need me to point out, are related to wine. Director Cédric Klapisch has always struck me as a quintessentially French filmmaker, working somewhere between drama and comedy where the drama is never truly that dramatic and the comedy never really gut-busting.

Jean (Pio Marmai) has spent most of his adult life fleeing the responsibility of taking over the family winery. He finally returns home after a decade when he learns that his father is gravely ill to find that the winery is now being run by his sister Juliette (Ana Girardot) with assistance from their youngest brother Jérémie (François Civil), who also works at the winery owned by his wife’s bloviating blowhard of a father.

Jean has left his young son and soon-to-be ex-wife in Australia to care for their father, but he ends up spending much longer than he expected helping out with the grapes and attempting to figure out what to do to settle a sizeable debt left by the death of his father. What begins as a simple trip home soon extends into the unknown as Jean grapples with his ideas of what he wants for the future.

I’m aware that all of this sounds vaguely condescending. The fact is that I have trouble honing in on exactly why I thought Retour en Bourgogne was so entertaining. Its whole “you can’t go home again” thematic approach is well-worn at this point, as is the way the film explores both sibling relationships, grief and the confluence of the two. If I never see another movie about a guy whose daddy issues give him a guy of forceful wanderlust, it will be too soon. Retour en Bourgogne shares so many of its beats with so many semi-inspired American indies that I cannot under any circumstance assign any measure of originality to it. (They could easily – and probably will – remake this by setting it in the Napa Valley and casting one of the many Chrises, Jenny Slate and maybe Adam Scott in the three lead roles.)

Klapisch spends a lot of the film poring over not only the nuances of drinking wine (paging Sideways to the front desk) but also explores every step of the harvest. While this could sound indescribably boring (I recall a documentary starring Tool’s Maynard James Keenan covering pretty much exactly the same ground), it actually lends a lot of texture and verisimilitude to what is otherwise a fairly by-the-numbers family dramedy. The harvest provides a convenient framing device, but Klapisch also explores it with the fervour and the attention to detail of the world’s most intense director of How It’s Made.

What really does shine through Retour en Bourgogne is charm. The three leads are enormously appealing even if their characters are sometimes tasked with purely load-bearing functions; Juliette, in particular, is given a very uneven internal life and an inner conflict that basically solves itself. They have a real camaraderie that smooths over the awkwardness of the film. It’s a clumsy and often schematic screenplay that paradoxically gives its performers more than enough space to breathe; it pulls off the unenviable feat of both feeling like a slack hang-out movie and feeling over-plotted and busy.

As for the Frenchness of the whole thing, well: it’s set in a winery and peopled almost exclusively with characters who know nothing but how to make wine. There have been lots of movies about wine, but I’ve never seen one from this point of view. I’ve seen innumerable movies about dysfunctional but loving families who have to put their differences aside for the greater good, but none of them also taught me what the grape harvest looks like. ■