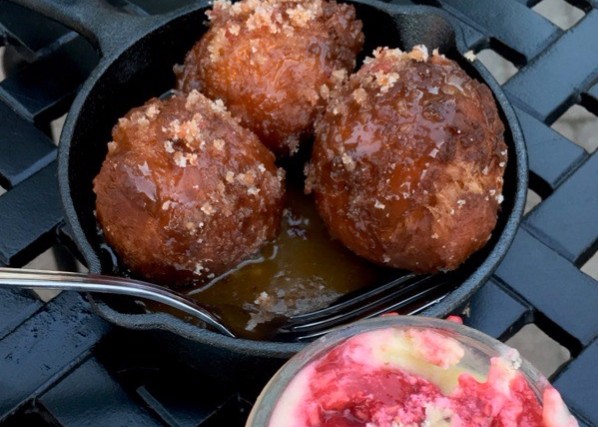 Casual Italian restaurants in this city are hard to come by outside of Little Italy.

Some of you reading this will remember Euro Deli, a St-Laurent Blvd. institution that carried the city’s crown of cheap Italiano grub and bohemian vibes for nearly 30 years. After its closure four years ago (RIP), some of its trainees went on to spread its good word elsewhere in the city. First came Campanelli’s eponymous café and his by-the-slice Adamo in St-Henri; now there’s chef Angelo Ruscitti’s new restaurant Porco in NDG.

If ED was a community mecca for the Plateau, Porco’s setting out to offer the same geniality to this West End neighbourhood. A hang-out spot and family restaurant rolled into one, Porco’s a small eatery situated in the lower half of Monkland Village. With three dozen and change for seating and minimal decor — white walling sparsely decorated with black and white photographs and hexagonal tiling spelling out “oink!” at the entrance — it’s a simple and inviting sub-basement space to relax in with an optional streetside terrasse. It being summer, my friend and I tucked in to a table outdoors to knock back pints of Moretti and look over the menu.

True to osteria form, Porco’s food menu is a mere page long. It’s a straightforward selection of appetizers, some salads (lest vegetarians be forgot), sides, sandwiches and desserts. Having heard that the menu was a pork-centric one of mostly meat, I’d planned to indulge in their pride and joy: porchetta sandwiches. Yearning makes the heart grow fonder, however, so we started with some of their sfizi or “whimsy” appetizers: A polenta corn dog ($7.50), a selection of crostinis ($8) and a side of slaw ($5). Our choices made for an odd hodgepodge of fine dining and food truck stylings, but I suppose that’s why it was all the more fun.

Each crostini was a salty couple of bites, but not overpoweringly so, and were welcome snacks to get an appetite going. Praise goes to the garlic anchovy butter with fontina cheese and the herbed ricotta with marinated mushroom, the first for its greasy and fishy pop and the other for its succulent, creamy toppings. These were interspersed with crisp bites of slaw whose dressing I thought lacked the expected tang it advertised, likely due to the bitter notes of raddichio it incorporated. I’d like to say I savoured these options, but “gobbled” is probably the more correct term as I wanted to cut into their monstrous corn dog. Its polenta crust made for a light afterthought of a casing around a whole Italian sausage, which tasted a touch more on the spicy side — juicy ground pork brightened by fennel and sweet basil. 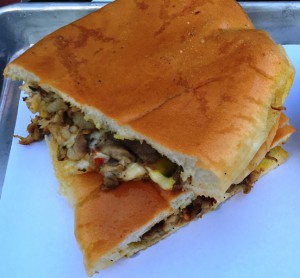 With the gut-buster of a corn dog stowed away, another food & drink round of beers could’ve served as dessert, but a visit to Porco isn’t complete without a sandwich. The resto offers either a chopped roast sandwich ($9), a Cubano version ($13) or a platter ($12 for one, $22 for two). True to traditional form, the meat is soft and seasoned in a balanced fashion that’s present without clouding the cut. It’s a savoury sandwich that easily stands alone, but made doubly tasty as a Cubano. The Floridian addition of swiss, mustard and pickle added a whole new dimension of excess that matched the principle recipe perfectly. Pro tip: Don’t be shy with their giardiniera. While it wasn’t nearly as spicy as I’d hoped, it was a brunoised mix that was, truly, crack cocaine in relish form.

Finally, dessert. Despite being sated more than a few bites back, my friend and I ordered one of each. The first was the al limone, a layered mix of lemon curd, macerated raspberry and pistachio shortbread — its sour and sweet fruits dominated each taste, turning its nutty shortbread into a pan flash ($6). While enjoyable and refreshing, Porco’s conceptual gloves came off with their bomboloni ($4.50); three donut holes sprinkled with bacon sugar and served in a pool of caramel. The bacon sugar by no means tasted excessively like meat and gave the dough a welcome accent, but the caramel was an elementary one devoid of additives; a few more drops of vanilla wouldn’t have hurt. The donut itself may have been undercooked as well, as their centres were slightly glutinous, but that’s a texture I’ll admit partiality to.

To my mind, NDG is one of Montreal’s more cloistered boroughs. That aside, secluded parts of the city like this one always have some selection of eats that holds a candle to visitation rights. Being a mere few blocks from the orange line and befitting of both a sit-down dinner or a quick bite, rock out with your snouts out, people. Porco is some pig. ■