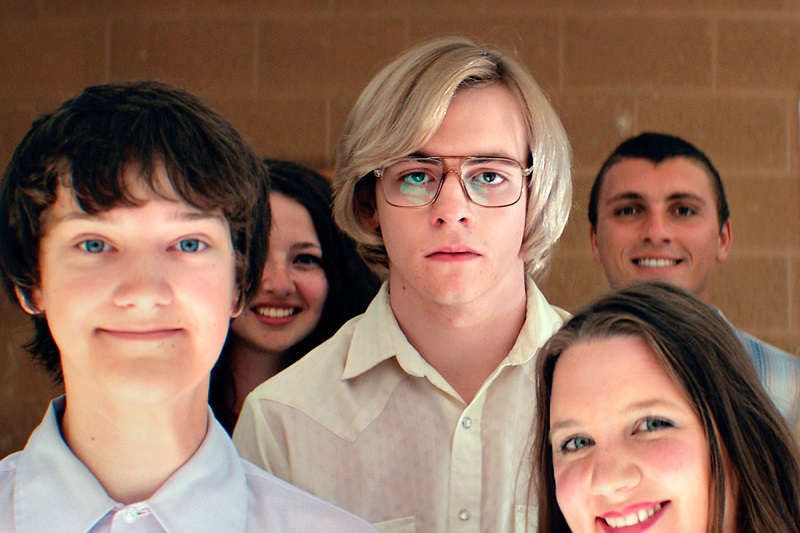 Ross Lynch in My Friend Dahmer

I never attended too many festivals before it became part of my job description. Part of that was probably financial — festival tickets are an added expense when you’re already going to the movies once or twice and renting half a dozen movies a week (he said, stroking his floor-length wizard’s beard). Part of it probably also stemmed from a total lack of planning — many of my early festival experiences centred around deciding to see a movie two hours before and finding it either impossible to coordinate or completely sold out. Now that my festival attendance is compulsive and often exhausting, I’ve found the relatively light schedule of the Festival de cinéma de la ville de Québec refreshing. Looking at the schedule does not inspire panic and a Tetris-like desire to reshuffle everything. It’s probably also helpful that I’d already seen a handful of the movies presented during my stay here, which made the whole process less of a Russian roulette situation.

I missed My Friend Dahmer when it screened at Fantasia, so I used the opportunity to finally see it as part of the FCVQ. Based on a graphic novel by Dahmer’s childhood friend Derf Backderf, My Friend Dahmer chronicles the coming-of-age of the serial-killer-to-be. As played by Ross Lynch, the young Dahmer is an awkward, gangly teenager that’s nevertheless bright enough not to be a total outcast. He befriends a group of arty dudes by “pulling Dahmers” — elaborate spazz-out sessions that earn their eternal admiration for whatever reason. Things are pretty rough at home, as his parents (Anne Heche and Dallas Roberts) are going through a tense divorce and Dahmer is struggling with his burgeoning homosexuality.

It’s both ripe material for a film and slightly obvious; My Friend Dahmer only really works because we as an audience know what the people around young Jeff do not. My Friend Dahmer spends an awful lot of time exploring the things that made Jeffrey Dahmer just a normal teenager, but I suppose that’s the point: that monsters aren’t always made. Sometimes, they just happen. Director Marc Meyers is careful not to be too insistent on the trail of breadcrumbs he leaves — there aren’t too many moments that point to a direct correlation in Dahmer’s “career” as a serial killer — and the film is funny enough without really being that daring. It’s a solid coming-of-age movie with a twist, though I do wish there had been more careful calibration of said twists.

There are basically three venues screening movies in the FCVQ: the historical Palais Montcalm, the Gros Becs theatre (which operates as an actual live theatre venue the rest of the year) and a screening room in the basement of Quebec’s Museum of Fine Arts. Though a beautiful space, the Gros Becs theatre is mercilessly stuffy, its air-conditioning unit apparently insufficiently equipped to handle the strain of a film festival. It’s not so bad when the room is half full (as it was for the afternoon screening of Dahmer) but it can be rather trying when the room reaches capacity. On the flipside, the screening room in the museum (which is admittedly a little removed from the rest of the festivities — but we’re talking about downtown Quebec City, where walking half an hour in any direction will bring you to a different area code) is absolutely gorgeous — a brand-new, state-of-the-art screening room. 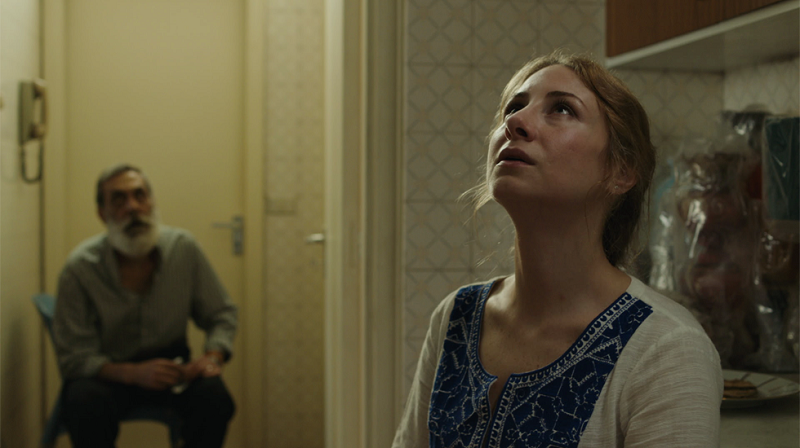 Philippe van Leeuw’s Insyriated (or In Syria) is an intense powder-keg of a chamber piece set in war-torn Damascus. Oum Yazam (Hiam Abbas) functions as a kind of den mother not only for her own extended family, but also for the rest of her apartment building. As airstrikes rock her neighbourhood, most have fled — except for her family and the young couple who lives one floor up. Despite the fact that a sniper has set up shop in the parking lot, the husband decides to make a run for it one day — and gets shot, an event only glimpsed by Oum Yazam’s maid Delhani (Juliette Navis). As the situation gets tenser, Oum Yazam must contend with whether she should tell Halima (Diamand Bou Abbad) what she saw and whether this ethical dilemma will help or hinder their cause.

Insyriated is extremely fucking intense from minute-one, a pressure-cooker drama that manages to use explosive cinematic tricks to make the Syrian conflict immediate and relatable. It has the kind of immediacy that WWII movies made during the conflict had; a complete abandonment of the kind of solace you get from history you know the outcome of. That having been said, van Leeuw has a problem with knowing when to stop, and he takes the tale so far into melodrama that it cheapens the whole thing. I’d called it Iñárritu fever — not realizing that your tale is dark enough as it is, without the need for additional, external darkness to really drive the point home. If your tale of war-torn Syria really needs some irredeemably villainous villains in the third act, you might need a little more faith in yourself. Still, Insyriated is, to me, the real surprise of this festival line-up — an undeniably effective and painfully dark look at a truly unthinkable situation.

Suzanne Clément is the bright spot in Des plans sur la comète, a French comedy that never really gets off the ground. Clément plays Michèle, a struggling realtor who hires a couple of mooks, Michel and Franck, (Vincent Macaigne and Philippe Rebot) to renovate her crumbling star property. Two-bit hustlers in a perpetual search for the next cash-flow situation, they leverage the situation into an opportunity to rob an expensive cement mixer from a local hardware store. Their plans are complicated by the fact that Michel completely falls for Michèle while Franck falls for Inès (Hafzia Hersi), an employee of the hardware store who dreams of getting the hell out of Dodge.

Des plans sur la comète is well-cast, but it lacks a rather important element in the world of comedy: jokes. The majority of the film’s “humour” comes from the two brothers’ incessant bickering, but it’s not so much funny as it is wearying, and the film never really finds a rhythm beyond relentless lobbying of half-baked insults paired with inflections of twee romance. It’s too bad, because there’s a charming idea for a screwball comedy here, but the film never builds any kind of momentum, comedic or otherwise.

Pretty much every single genre that was once considered artless or purely commercial has been re-evaluated these days; Nathan Silver’s Thirst Street repurposes the tropes of ’70s and ’80s Eurosleaze to tell its story of obsessive love between Gina, a mousy American flight attendant (Lindsay Burdge) and Jérôme, a sleazy French strip-club bartender (Damien Bonnard). It’s not really a love story, though, since she’s an easily attached loner still reeling from the suicide of her live-in boyfriend, and he’s a coked-out mustache man whose ex-girlfriend (Esther Garrel) returns from tour very early in his one-sided affair with Gina.

Thirst Street is basically a Fatal Attraction-type thriller re-imagined as an indie romance, but filtered through the lens of overly stylized Eurotrash. That’s a lot of meta-levels to contend with, and in truth, Thirst Street does a lot of fairly unearned co-opting in order to make its slightly by-the-numbers plot interesting. It’s Betty Blue by way of Young Adult by way of a late-period Emmanuelle film; all interesting signifiers, but all ones that I’m not sure the film takes full advantage of. It’s an entertaining movie and a very visually striking one, but the Venn diagram of those two things rarely overlaps.

John Cameron Mitchell’s How to Talk to Girls at Parties is an adaptation of an 18-page Neil Gaiman story, which almost automatically dooms it to a position somewhere between “not like the story” and “how dare they adapt this”? I’m not that familiar with the original, but I did enjoy this bizarre sci-fi punk rock odyssey about an unassuming teenage punk who stumbles upon a crew of aliens in 1977 Croydon. Enn (Alex Sharp) befriends Zen (Elle Fanning), who has come to Earth with her crew to glean as much knowledge as possible, but instead finds herself drawn to earthly delights like punk, making a ruckus and having full sexual intercourse with Earthlings.

The final message of How to Talk to Girls is a little portentous and severely of-the-times, but its refreshing Earth Girls Are Easy by way of Derek Jarman and corny Scopitone videos vibe is pretty fun even if the film struggles to find a proper tone and vibe for its overly outlandish propositions. Sharp, Fanning and especially Ruth Wilson (as one of the more outspoken aliens) are solid, and though the film never really finds a consistent tone as it cycles through more ideas than there are in several seasons of many TV shows, it’s an entertaining and surprisingly original take on a genre that — well, I don’t think it fully exists yet, but it only seems like a matter of time. ■