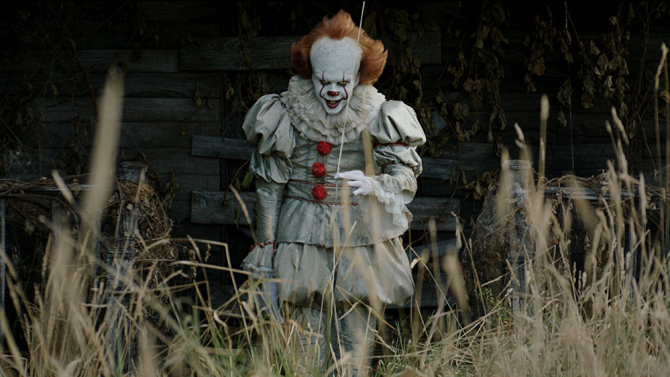 Bill Skarsgård in It.

With a strong cast and a stellar atmosphere, there is a lot to love in Andy Muschietti’s adaptation of It, which casts a new look at one of Stephen King’s more popular novels. As a series of child disappearances grip their hometown, the self-dubbed Losers Club are committed to get down to the mystery and fight an evil clown-shaped entity called Pennywise. A coming of age drama wrapped up in horror tropes, the film works best when it focuses on the intimacies and insecurities of youth.

Rain pours down in It’s opening scene: it’s the late 1980s and two brothers are inside playing in their cavernous Maine home. Bill Denbrough (Jaeden Lieberher) is sick but helps his little brother Georgie (Jackson Robert Scott) make a paper boat coated in wax to float down the flooded street. Their house is dusty and somber but the warmth of brotherly friendship wears away the melancholy of the setting. With a light hand, the movie establishes that the world of children is not all bubblegum and sunshine, but can often be a time of darkness, fear and despair.

Thanks to popular memes immortalizing Tim Curry’s performance in the 1990 miniseries, even those who have never watched the original adaptation will be able to foretell what happens when Georgie’s boat floats down into the sewer drain by the side of the road, but our first look at Pennywise (Bill Skarsgård) is nonetheless horrifying. With glistening pasty make-up and a grotesque, painted-on grin, Skarsgård errs on the side of gentleness in the beginning of this encounter. Soft-spoken and playful, his menace is measured through spittle that slowly accumulates in his buck teeth before dribbling down onto his chin and his wandering pupils that oh-so-slowly drift to the outer edges of his eerily white eyeballs. Even for those who are not upset by clowns, the image is perfectly orchestrated to haunt the darkest corners of your mind.

The sense of dread that infuses this sequence lies in its simplicity. The interaction amounts to little more than a conversation between a young child and a menacing adult but the horror that lingers at the peripheries of this encounter is what pushes your heart down into the pit of your stomach.The rest of the film will have moments that approach this level of discomfort, but most diffuse any sense of horror by showing too much. There are too many set-pieces and nightmares that are loaded down by too much CGI (much of it ugly and extraneous) and with so much given away on screen, too little is left to the imagination. As a film that’s ostensibly about the horror of growing up, it would have benefitted by showing less and allowing the audience’s worst fears to fill in the gaps. With fleeting exceptions, the horror just does not work and in some cases, actively detracts from the film experience.

As a portrait of growing up though, It excels. Focusing on the core members of the Losers Club, you have a real sense of camaraderie. It’s hard not to compare the film’s 1989 to some of the better coming-of-age films of the 1980s and it mostly measures up. With casual swearing and an unflinching look at the anxieties and violence of growing older (from puberty and crushes to domestic abuse and bullying) the movie is easily comparable to a film like Stand By Me, as it effectively captures that pre-adolescent bravura still tinted by the fragility of childhood. However, while Stand by Me focused on four boys, at its largest the Losers Club features seven kids – and even with a two-hour and 15-minute runtime, there just is not enough time to establish a lasting connection with all the characters. Even as the film focuses most of its attention on the core members of the group, dividing the narrative over so many different experiences often feels more episodic than cinematic, diminishing the film’s emotional power.

Of the child actors, three stand out in particular. As Eddy, a fast-talking hypochondriac, Jack Dylan Grazer gets the most laughs in the films but still elicits a lot of sympathy. In many ways he serves as the film’s voice of reason – albeit taken to a hilarious extreme. As the poet philosopher, Jeremy Ray Taylor as Ben channels a seasoned empathy. Behind his baby face, there is a quiet confidence and a grasp of feelings and ideas beyond his years. As good as they are though, Sophia Lillis gives a star making performance as Beverly, the only girl of the group. Navigating the sexual abuse and social ostracization of her character, she has the most difficult role to pull off, and she dominates every shot she’s in. She has that other kind of “It,” that indescribable star power we associate with cinema’s biggest icons.

While far from perfect, it’s difficult to walk away from It not having enjoyed the experience. The characterizations feel real and the portrayal of childhood is loaded with empathy and understanding. Like many great American films, as a member of the audience, you feel a part of a group and an experience – even if it might be different from your own. While imperfect, the movie has that intangible quality of intimacy that will make it easy to revisit and might resonate particularly with audiences close in age to the characters. ■

It opens in theatres on Friday, Sept. 8. Watch the trailer here: