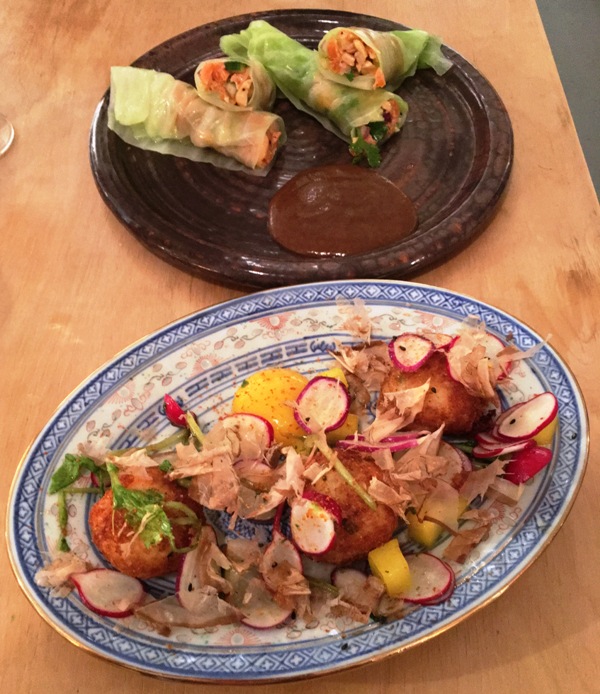 For all of the attention Japanese cuisine has received for the last half decade, whether it’s ramen galore or yakitori, there’s one staple that contemporaries in this city had yet to tackle: curry houses. A pantry staple and a longtime feel-good option across Asia, curry is one of those diasporic dishes that’s cheap and unendingly flavourful no matter the region, and Bighi Curry’s brought it to our doorstep in the form of a pan-Asian sauce slinger.

The idea for the restaurant came from Bighi’s chef Huriel Pitre (le Filet, Salmigondis) during his time at Tokyo’s two-star Michelin restaurant l’Effervescence, following a meal out with locals one night. Coming back to Montreal and pairing up with Bighi’s head-of-front Gabrielle Camiré at the French restaurant Wilfred sur Laurier, the two took what investments they could put together and formed this small spot on the northeastern-most tip of the Gay Village’s borders, opening its doors back in July.

Walking in with a friend, the interior immediately reminded us of ground-level apartments, one of those two-steps-till-the-living-room arrangements that’s adorned with plants, dressers and a box of toys for the kids. As we kicked back at a table with a cocktail menu, listening to a trip hop track piped through their speakers, we waxed nostalgic over their wall mural bleeding Japanese images from Dragonball Z and Princess Mononoke. If there’s one remark to make on the design and feel of the place, it’s that Bighi’s proprietors may have experience with dinner jackets and broaches, but their new restaurant is a place fit for all manner of disconnected moustaches, raceday caps, sneakers and wine in a can (see: Big House Wine). You know who you are.

A visit here’s not complete without one of Camiré’s cocktails, all of which exhibit a lot of play with flavour and concept. We started out with the Cherry Coka, a mix of cola, lime and rhum in a sugar-rimmed glass with a touch of cherries macerated in anise, and the Soju Sour, a flipped cocktail of soju and gin and topped with a literal lemon twist. The first earns stripes for its boozy take on a 600ml of childhood curbside memories, the second for its balance act of creamy egg whites with the wallop of gin and soju. 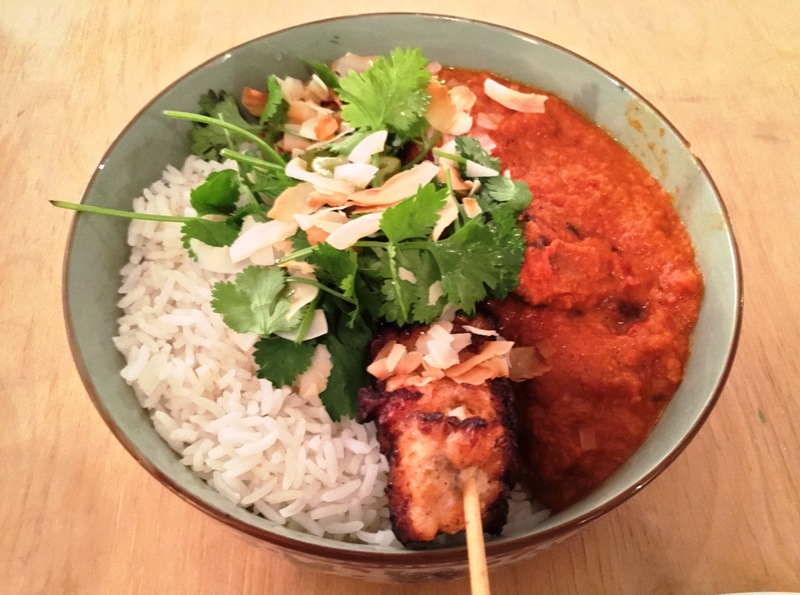 I had noticed Bighi’s menu has swapped out menu items here and there since it opened, but this speaks more to Pitre’s inventiveness than indecision. This visit started with shiitake [vegan] tartare and lettuce ($8), a blend of brunoised mushroom, mango and red onion in a light soy sauce and served with Boston lettuce leaves. While it gave the meal a refreshing start, the meal was somewhat structurally tricky — filling leaves with scoops of the mix and having its dressing spill out onto the table with each bite. After we mopped up our mess, we received plates of fried congee balls ($6) and trout cabbage rolls ($9) which immediately outshone the first app. The congee itself was crisply encased, surrounded with an artful display of sliced radish, bonito flakes and a single egg yolk. The rolls on the other hand were lightly steamed cabbage leaves carrying fresh cuts of fish, cukes, pickled daikon and peanuts that alone had an easygoing and muted flavour profile to them, but its paired sauce of noisette butter and miso gave each bite the amazingly rich taste of a demi-glace. We wiped the plates of these latter two dishes clean with our fingertips.

At the time of my visit, Bighi was offering Thai, Indian and Japanese curries, always with sides of rice. I went for the katsu ($15), an OG Japanese curry served with a breaded pork cutlet and brightened with green onion and pickles, while my friend went for the tikka masala with coconut, okra and chicken brochette ($15). Each of these dishes alone could have been shared for how filling they were; the delicate appetizers were a sharp contrast to these gut-busting plates, kind of like being hit with a cannonball after being tickled with a feather. The katsu’s pork was succulent, with its brown sauce a pleasingly robust and salty mix of spices and garlic. As for my friend’s tikka masala, it too had juicy meat, with its thick tomato and okra sauce well-accented by a blend of cumin and coriander. Both of these curries certainly scaled back on any actual spiciness, leaning more towards more savoury takes on what were otherwise heartwarming meals. As for dessert? No thanks, we were stuffed.

I know I’ve deemed many-a place in Montreal “informal,” but this place takes the cake, er, curry. With ambiance and pricing to match, it’s an ideal spot for students and socialites alike, as Bighi’s got plenty of class to spare in their execution of a homecoming meal in a homecoming environment. You can bet I’ll be coming back for their steal of a $40, seven-course tasting menu. ■