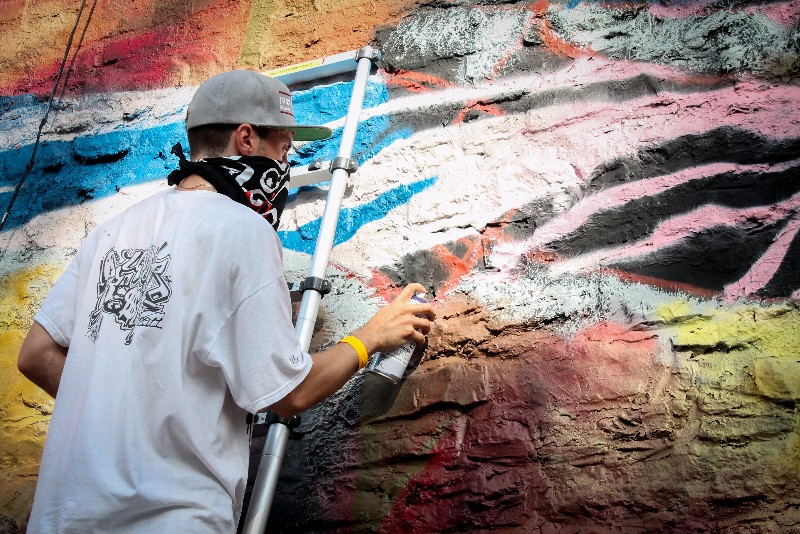 Under Pressure 2016. Photo by Ryan Brady.

Every August, Montreal’s graffiti and hip hop communities join together to throw a weekend-long block party showcasing and celebrating the tight-knit scenes’ achievements in art, music and dance, and this year’s edition of Under Pressure from Aug. 9–13 promises to be the biggest one yet, focusing on the theme of Underdogs.

Now in its 22nd year, the festival has grown from its roots as an avenue to promote the artistic value of graffiti to the wider public to its current format highlighting all four pillars of hip hop culture: graffiti, b-boying and b-girling, DJ-ing and MC-ing. According to festival organizer Melissa Proietti, Under Pressure has become more inclusive over the years to give a platform to a wide variety of artistic styles and cultural creators.

“Under Pressure is really about evolving along with the culture and along with the people who are involved in hip hop culture,” Proietti says. “We want to include as many people and different kinds of outlets within the urban context as possible. It’s very community oriented, and it’s like a family reunion every August!”

Montrealers will find plenty to see and do along the Under Pressure zone on Ste-Catherine from St-Dominique to St-Elisabeth. Annual crowd-pleasing events return, including b-boy and b-girl competitions, skateboarding showcases, bright new graffiti murals taking over the streets and alleyways, group exhibitions Queens Creation (moving from Verdun to the heart of the festival zone for the first time) and Out for Fame (both at 209 Ste-Catherine E., opening Aug. 11, 6–11 p.m.), plus a special opening night edition of live art contest Beaux Dégâts punctuated with the regional finals of the national DMC DJ competition with performances from DJs Killa Jewel, Construct, Lentils, Stram and Mixologue plus beatboxing from X-WAM (87 Ste-Catherine E., Aug. 9, 9 p.m., $8). A series of free outdoor hip hop concerts will take place every night in the heart of the festival zone, with Saturday’s show featuring headliners A-F-R-O and R.A. the Rugged Man.

Special highlights for this year include walls created by special guests, namely West Coast Haida artist Corey Bulpitt (who created the memorable visual identity for Under Pressure 2016) and Tunisian calligraphist Karim Jabbari (in a collaboration with the concurrent Orientalys Festival), plus an expanded Off the Record conference that will feature hip hop cultural workers and researchers from across Canada including Miss Me, Monk-E, Under Pressure founder Sterling Downey, Cult MTL’s own hip hop writer Darcy MacDonald, Pierre-Michel Jean-Louis (bboy Afternoon), Vincent Stephen Ong (Urban Science), Dr.Mad (DJ and community worker) and more in a joint-presentation from a number of Canadian universities including McGill. The conference is free and open to everyone, taking place at Notman House (51 Sherbrooke W.) from Aug 10–11, 9 a.m.–5 p.m.

For Proietti, the Off the Record conference is a special highlight for this year’s programming. “The idea is to establish some dialogue between people who are doing cultural work, and sharing knowledge and ideas,” she explains. “We want to empower the people who are doing this work to give them different tools and connect with other people doing similar work. It’s a really exciting and unique opportunity to do an academic conference in the context of Under Pressure.”

As with last year, the 2017 edition of the fest will include a special focus on the work being done by Indigenous artists, including Bulpitt plus conference participants Jodi Stonehouse, Allan Vicaire and Jarrett Martineau, who will be hosting workshops and panel presentations.

“It’s also important to have a platform for Indigenous workers who are creating and experiencing hip hop culture in ways that are certainly different from a lot of what’s being talked about, so it’s important to focus on and highlight that.

“We chose the theme ‘Underdogs’ because a lot of us that are part of Under Pressure and part of hip hop culture really identify with the idea of the underdog,” says Proietti. “Graffiti writers are definitely the underdogs of the art world. Hip hop was the underdog of the music industry — obviously that’s changed quite a bit, but there are still a lot of negative perceptions. What does it mean to work with a lot of stereotypes and negative perceptions that exist against you, and to come out successful and stay true to who you are and the things that are important to you? I think it’s important for us to always be addressing and considering these questions. For the underdog, when something is important to you, you find a way.” ■