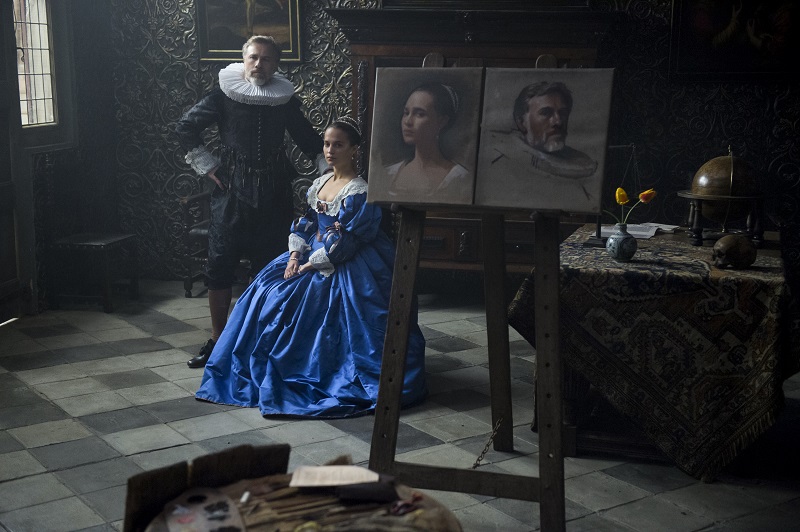 There’s this idea that costume dramas are somehow automatically classier than “regular” movies. It’s certainly something that I’ve been guilty of believing in the past, and a notion that has mostly driven me away from the work of Ismail Merchant and James Ivory as well as a large swath of pre-Nouvelle Vague French cinema. It’s also mostly bullshit, because for as long as they’ve made dusty powdered-wig chamber dramas, they’ve also used the genre to covertly make silly, crass, over-the-top soap operas full of “tasteful” nudity and guillotine beheadings. Costume dramas may feel classier, but they really aren’t.

It’s unclear which kind of costume drama Tulip Fever first set out to be. It has all the clear markings of a Weinstein “salvage” job – overly explicative voiceover by a tertiary character (the leads being too busy to come back and record it), supporting characters played by major stars who barely appear, short scenes, frequent edits and a tendency to overemphasize either action or sex scenes throughout. These salvage jobs, as you may surmise, do nothing but make a troubled production into an even more troubled, patchy final product. The film suffered many delays and, while the official story will always be boring, the proof is in the pudding: Tulip Fever is a broken mess, an attempt to scoop the ice-cream back into the cone when it’s already mostly melted.

Sophia (Alicia Vikander) is a Dutch orphan who has been married off to Cornelius Sandvoort (Christoph Waltz), a widowed baron of industry who wants nothing more than for his wife to bear him a son. Sophia seems to be infertile, however – or at least completely repulsed by her snooty old-man husband. That all changes when she meets Jan Van Loos (Dane deHaan), a portrait painter commissioned by her husband to paint both of their portraits. The two instantly fall in love, cooking up increasingly complicated stratagems in order to see each other.

Things get increasingly complicated when Sophia’s servant Maria (Holliday Grainger) becomes pregnant with the child of a local fishmonger (Jack O’Connell) who immediately disappears after losing a fortune buying and selling tulip bulbs (the Beanie Babies of 17th century Holland). Maria and Sophia cook up a scheme to make Cornelius believe that Sophia is the one who is actually pregnant in order to fake Sophia’s death in childbirth, allowing her to escape with Jan and give Cornelius the child he so dearly wants.

It’s already a pretty soapy story, but I’ll admit that it’s kind of an irresistible one. There’s a lot going on here, from the class struggles of what was then the richest nation on Earth to the peculiarities of drunken men spending fortunes on flower bulbs in the hopes that they will increase in value over time. Unfortunately, that also means that there’s a lot going on here – presumably too much to make the sexy thrill ride full of butts that the Weinsteins imagined this would be.

The film feels straight-up butchered, with scenes chipped down to their barest form and some characters being essentially removed until they’re useful. (Zach Galifianakis plays deHaan’s drunken party animal pal and, though he has a pivotal role in the plot, he has maybe four lines in the first hour of the thing.)

This movie basically consists of nothing more than exposition and connective tissue. By the time Sophia decides to sacrifice everything she has for Jan, we’ve only ever heard him talk about painting, but we’ve seen him have sex with her twice. Their love story is the most literal expression of love at first sight I’ve ever seen; it’s mostly made up of three languid looks and each of them moaning while looking out the window after their first meeting.

Tulip Fever is an adaptation of a novel, which already means doing away with wide swaths of narrative in order to fit a conventional runtime. If most adaptations are equivalent to Reader’s Digest condensed editions, then Tulip Fever is a condensed edition of itself, all exposition and people running around delivering crucial info in smoky taverns full of topless women. There’s clearly been a lot of care put into this thing; it’s well-cast and well-shot, its crowd scenes are full of life… but it just fucking sits there – or zips around, more accurately. Tulip Fever seems so afraid it’s going to be seen as stodgy or boring that it throws sex scenes in willy-nilly and keeps dialogue (which is written by Tom fucking Stoppard, mind you) to a minimum.

Even its crackerjack cast is wasted on what’s essentially 100 minutes of exposition delivered in alternating hushed tones and wild bellowing. Vikander – always a compelling presence – is unable to imbue her character with actual character, letting the voiceover narration by Grainger do the bulk of that, while deHaan is treated with disinterest for most of the running time. Waltz is stuck doing a variation on the cold, patriarchal dormant-monster he’s been doing for the last few years (Water for Elephants, Big Eyes, Carnage) and Galifianakis – well, he’s in this movie, I’ll say that much. Only Grainger rises above the film’s flaws – but then again, one of the film’s major flaws is that her character has been retooled into the protagonist.

The Weinstein salvage job has become so notorious that it has earned Harvey Weinstein the nickname Harvey Scissorhands. It helped kill off films like 54, The Yards, Fanboys, The Immigrant and other movies that have more or less sunk into relative obscurity because the sexed-up, pared-down versions that were eventually released stank. I don’t know if Tulip Fever would ever not have stunk – it certainly has all the elements lined up to be a good movie, but the slick and sexy tone is something that was there before the film was edited to shit.

Director Justin Chadwick is certainly no stranger to making kind of shitty prestige dramas, and I wince to imagine the languidly paced two-and-a-half-hour prestige version of Tulip Fever, which I assume would have a lot more painting and a lot more of deHaan and Vikander writhing around naked on silk sheets. The form that the film takes now, however, is good for no one.

In the first few minutes of Tulip Fever, I thought I might be seeing some sort of cult classic – a kind of polite Caligula for the BBC crowd, so intent on being classy in its prurience that it ends up anything but. That isn’t the case. Whatever’s trashy about Tulip Fever is trashy out of incompetence and circumstance, out of aggressive editing and careless pruning of characters until there’s nothing left. All indications point to Tulip Fever actually being garbage, but I find it hard to even hit it with that qualifier – it’s a mess, a hollow shell of whatever the hell it was supposed to be. Those are rarely any fun. ■