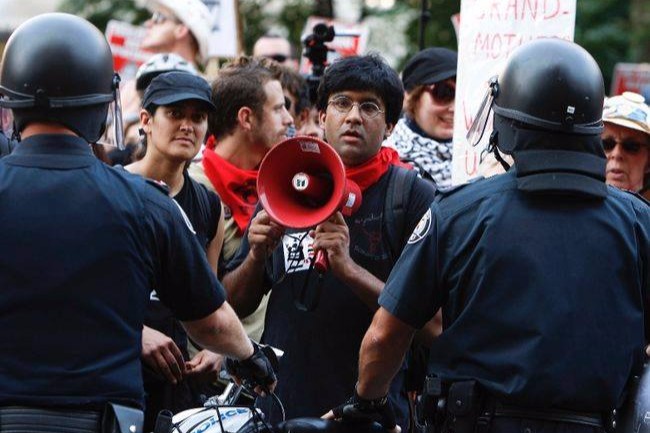 Quebec is both a great city and a small town. And nowhere is the small town aspect more evident than its police force. Although Quebec City officers were among the first, three years ago, to abandon a province-wide police protest that involved wearing clownish camouflage slacks instead of their uniform pants, they continue to act like clowns.

If the protest world had rock stars, Jaggi would be our Jagger. The anti-globalization activist first shot to prominence 20 years ago during protests in Vancouver over the Asia-Pacific Economic Cooperation (APEC) conference. Even before the protests had started, Singh was tackled and arrested by undercover RCMP officers and held in jail for the duration of the conference on charges that would later be dropped.

It was a pattern that would become familiar as he was arrested again in 2000 at a G-20 protest in Montreal and six months later at a 2001 Summit of the Americas conference in Quebec City. This time he was held for 17 days and made international headlines for, among other things, weapons charges related to a catapult that an unrelated group of protesters had used to launch stuffed teddy bears over the barriers the city had erected to protect the conference. Singh was later acquitted of the charges from both the Montreal and Quebec protests.

Fast forward to Aug. 20, 2017, again in Quebec City, where Singh had joined protesters gathered to oppose a march by la Meute, a right-wing anti-Muslim group that ostensibly wanted to protest what they dishonestly refer to as “illegal” immigrants (i.e. refugee applicants).

While local anti-racist groups conducted a peaceful rally and march from Place d’Youville in Old Quebec to the steps of the National Assembly, Quebec police had sequestered the la Meute protesters in a parking garage several blocks to the west. As word spread that the “wolf pack” had been trapped in a concrete den, a mix of peaceful protesters and more militant Black Bloc and Antifa (anti-fascist) activists gathered at the garage entrances, which were cordoned off by riot police.

So imagine, if you will, a line of paramilitary riot police faced with a chanting crowd of anti-racist, anti-fascist protesters. Some of the protesters, Black Bloc or Antifa, are wearing masks and tossing fireworks and smoke flares at police while Jaggi Singh marches back and forth, calling out chants on a portable megaphone. The police respond by declaring the protest illegal and proceed to arrest … Jaggi Singh. No one else. No one in masks, not even the ones who would soon march over to the café-bar terrasses on the nearby Grande-Allée tourist strip, tossing chairs and assaulting several bystanders, including at least one anti-racist protester.

Jaggi Singh. Arrested and wrestled to the ground, once more, by police who have identified him as an anarchist leader — as oxymoronic a term, in this case, as police intelligence. Asked to identify himself, Singh, knowing full well that his celebrated 2001 arrest has made him a bit of a protest poster boy for police here, jokingly responds that he is Michel Goulet, a popular star of the former Quebec Nordiques hockey club.

Singh is later released without charges, but is personally attacked by Quebec Mayor Régis Labeaume, who blames Singhfor the violence. “It is absolutely necessary to condemn the behaviour of the thugs and provocateurs of the Jaggi Singh gang, for whom violence is a legitimate means of expression,” Labeaume says, after praising the “exemplary” work of police and the cooperation from leaders of la Meute. (Read Singh’s response here.)

Sigh. After basically telling Singh to get out of town and don’t come back, Quebec police took the highly unusual route of having Singh arrested in Montreal a week later and dragged back to Quebec City in handcuffs to face two charges in municipal court: one count of obstruction and one of impersonation … of Michel Goulet!

Sure, Goulet and Singh are both left-wingers, but the similarities end there. The slight, brown-skinned, bespeckled Singh would have a better chance of impersonating Youppi! than Goulet, who’s six-foot-one and about as white as Bonhomme Carnaval.

Most people charged with summary offences in municipal court are issued a summons to appear at a later date, not hauled off to the hoosegow without warning, as Singh was on Tuesday. When he appeared in court a day later, Singh also discovered that the presiding judge was the same one who had signed the warrant and, according to Singh, had a track record of being anti-protester. The judge agreed to recuse himself and was replaced, at which point Singh pleaded not guilty to the charges. To his surprise, however, crown prosecutor Marie-Hélène Guillemette tried to argue that Singh was a threat to public safety and should be held without bail until his trial. That led Singh, who was defending himself, to ask that he be able to continue his defence in English, which forced another change in judge.

The third and final judge, Patrice Simard, rejected the crown’s arguments about Singh’s threat to public safety after even the crown’s own witness, Sgt-Det. Stéphane Noël, admitted Singh hadn’t committed any acts of violence during the demo. The judge also rejected the crown’s request to fingerprint Singh and ban him from the city except for court appearances, setting instead a $250 bail and barring him from hanging around the National Assembly. “That’s okay, because I don’t have a lot of friends at the National Assembly,” Singh joked, but noted wryly that the ruling meant he was free to visit city hall.

Jaggi Singh, even his friends will admit, can be annoying. (For the record, I’m not a friend. Although I’ve seen him at numerous events and protests over the years, I only met Singh once. He told me he had expected me to be much younger. As I said, Singh, 46, can be annoying.)

As an anti-racist, anti-globalization activist for more than two decades, annoying is a big part of the job description. You chant, you protest, you get in the face of the people who front for the policies and practices you’re protesting against … and that means you’ll likely be annoying some police as well, from time to time.

Police, on the other hand, are supposed to be trained to ignore the people who annoy them. Disturbing the peace is a crime, disturbing the police is not. By that measure, Quebec police did not, as Labeaume pretends, do an exemplary job on Aug. 20. They engaged in sloppy political profiling, targeting and tackling a figurehead for the actions of people over whom he had no sway or control or connection, while doing nothing to stop any actual crimes. Their mayor then upped the ante, choosing to demonize the most prominent activist present, describing him as a leader of a gang of thugs and promising to run him out of town.

Then an unusual chain of events was set into action, with a judge who allegedly dislikes protesters approached a week later to issue an unconventional arrest warrant for Singh for a pair of summary offences, including impersonating a famous hockey star. Then a crown attorney tried to keep Singh jailed while awaiting trial, then, when that bid failed, asked that he be fingerprinted and barred from entering the city, which was also rejected.

If all this seems a wildly over-the-top reaction, at least we know that Jaggi Singh is used to it and isn’t losing any sleep, according to his Facebook account of the experience.

“All in all, I was able to get a lot of sleep (the only thing to do while in detention, and I’m able to sleep anywhere), remind myself of the support that is out there, and re-commit to organizing together with so many of you against the racist, anti-immigrant far-right, in Montreal, in Quebec City and everywhere. Let’s continue to organize!”