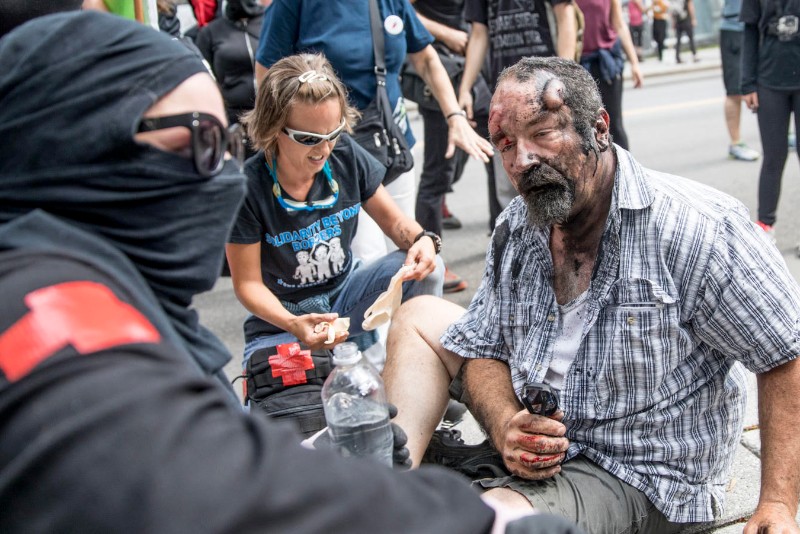 The only way to beat the fascists and neo-Nazis and the far-right is to physically beat them into submission — or to ignore them, then they’ll just go away.

Advocates for both extremes aren’t hard to find these days in the wake of right-wing protests and left-wing counter-protests across North America. This includes a bizarre non-encounter Sunday in Quebec City between black-clad members of the hyper-nationalist La Meute, black-clad activists of the anarchist Black Bloc and a loose coalition of anti-fascists known simply as “les Antifas.”

Honestly, you’d be hard-pressed to tell the difference between Quebec’s Antifas and Black Bloc activists, even with a program. Vice journalist Simon Coutu was embedded with four masked Antifa activists on Sunday who were disappointed that police prevented an open confrontation by sequestering La Meute marchers in an underground parking garage. Deprived of their key target by a cordon of riot squad officers, groups of masked Antifas eventually headed to the nearby Grande-Allée strip of resto-terrasses, Coutu wrote.

“The Antifas used Black Bloc tactics: they threw projectiles and fireworks at police, who responded with cayenne pepper. Some Antifas also had pepper spray. They marched on Grande-Allée, crowded with tourists on this sunny Sunday, and threw garbage bins and patio chairs at police.

“An Antifa demonstrator broke the camera of a journalist from the Global network and some individuals suspected of being La Meute ‘collaborators’ were brutally attacked with punches and sprayed with black paint and pepper by the Antifas,” Coutu wrote.

One activist told him “I am not disappointed that in the end it was only a clash between the Antifas and police. The police are in the service of the fascists. But it’s definitely a drag because I came to Quebec to prevent La Meute and racist speeches from being able to circulate freely in the streets.”

Very late in the afternoon, La Meute, which means “pack,” — as in wolf pack — were finally allowed out of their concrete parking den for a quick and silent walk around the block once the Antifas protesters had mostly scattered or departed on buses back home.

Meute leaders somehow translated this as a victory for their extreme right, anti-immigration agenda. Portraying themselves as free-speech advocates, Meute spokesperson Sylvain Brouillette, commenting on the Grande-Allée skirmishes, told reporters that Antifa “violence serves our cause. We are peaceful and we just want to have the right to express ourselves.”

Whether Antifa violence served the Meute cause is debatable, but it certainly didn’t serve the Antifa cause here. Unlike Antifa activists in Charlottesville, who are widely credited with intervening to protect a group of protesting clergy from a surge of armed white supremacists, the Quebec City actions were directed at lone individuals who were blocks away from the Meute gathering. One man was beaten badly enough that an Antifa medic rushed to his aid as he sat on a curb, black spray paint dripping from his swollen head and face.

Media headlines of course centred on the violence, and the politicians quickly followed suit, including Québec solidaire MNA and former student activist Gabriel Nadeau-Dubois, who tweeted: “It is necessary and legitimate to demonstrate against intolerance and racism. But violence is counterproductive: we condemn it.”

Nadeau-Dubois echoes the frustration of the thousands of peaceful anti-fascist protesters that the image of their movement was tainted by a violent fringe. It’s a dilemma he faced often as one of the most visible leaders of the 2012 Printemps Érables student strike. That massive movement — which attracted huge numbers of supporters, involved hundreds of marches and picket lines and lasted seven months — was carried out with an impressive level of calm and restraint. But the rare incidents of violence from protesters, mostly minor vandalism from Black Bloc activists, were what really attracted media attention.

(A violent Sûreté du Québec clash with protesters in Victoriaville was an exception, but SQ incompetence and stupidity was a major factor there. Indeed, most of the violence associated with the student strike came from paramilitary police operations, including several mass arrests using a “kettling” technique that swept up protesters and bystanders alike for violating a city by-law that courts would later overturn.)

But I digress. When gangs of masked individuals take it upon themselves to act as an informal militia for a broad coalition of Quebecers who oppose racism, discrimination, xenophobia and whatever brand of crypto-fascism groups like La Meute bring to the table, what happened in Quebec City last Sunday was inevitable.

But many activists in loose collectives like the Bloc and Antifa have concluded that aggressive confrontation is the only way to fight the right and that anyone who believes that non-violent protest can produce change is fooling themselves.

Their violence doesn’t frighten the hard core of the so-called alt-right movement, but it certainly scares away natural allies. Each incident ensures that the next event will see an even greater police presence. This escalating spiral of aggression benefits people like Sylvain Brouillette as his “peaceful” crypto-fascists cultivate a fake cult of victimhood bolstered by their self-perception as victims of oppression.

Silence and passivity won’t stop fascism, it’s the oxygen that allows it to breathe and grow. But throwing fuel on the fire won’t halt it either. The solution lies is voicing an opposition as loudly as possible, as often as required and in ever-growing numbers. Solidarity must be nurtured, and that requires acknowledging that fascism won’t ever be defeated by adopting its tactics of violence and intimidation. ■