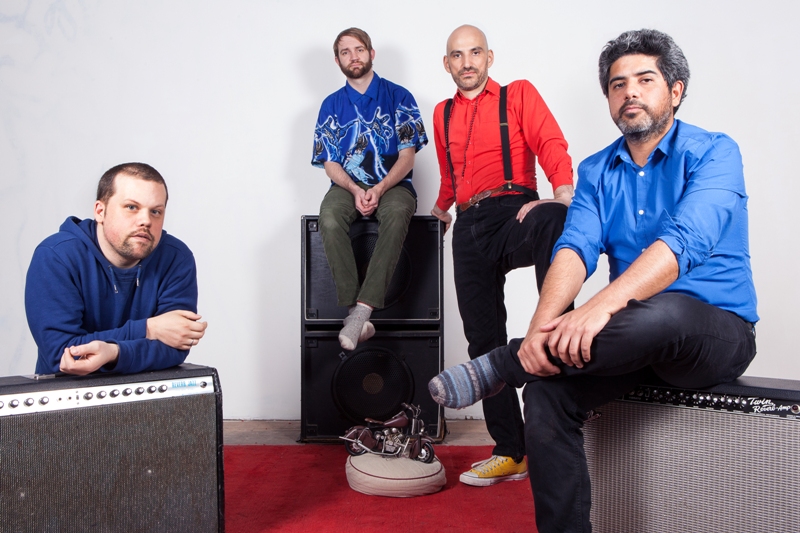 Jon Cohen (second from right) and the band

After 10 years on the road, Jon Cohen has found his band’s line-up as experimental as the music. Through different members and a spell as a one-man-band, he’s finally settled with a group of musicians that he wants to move forward with. We caught up with Cohen ahead of the launch of his new record Go Getters to talk about this rough year, his rotating cast of band members and taking inspiration from the crazy state of the world.

Owen Maxwell: How did your line-up change affect the sound of the record and were there any other unanticipated effects on the process?

Jon Cohen: The last two records were instrumental solo records, so it had been a few years since I’d played with other musicians. I toured as a one-man-band for at least three years and even started a one-man-band festival. I was enjoying the ease of getting around and logistically it was so much easier. The one thing I was lacking was the chemistry you get with other people. This record really is a band effort and combination of everyone’s input. We have a finely oiled machine right now, everyone is super on top of it. When we play live shows we can take it places I couldn’t go to before.

OM: Do you think the rotating cast of band members is part of what’s kept your sound fresh again and again, where other bands might repeat themselves?

JC: There’s definitely bad and good to both sides of it. Having fresh members is good because you can reinvent your sound. On the flipside, if you do always start at zero each time, it’s hard to progress. Getting to know each other musically, learning the songs and checking personalities can be obstacles, too. For this record it turned out perfectly. The right people came along at the right time and they’ve been playing with me for three years. I’m really happy with where the music is now, and we’re still growing together. I don’t want to clean house and start over again.

OM: I understand you went through some hard family matters leading up to this album. Is that where some of the darker shades of the record are coming from?

JC: When I was writing some of these songs, my father passed away. It was a time of reflection for me. I was about to go on tour and then I just cancelled everything. I put music aside for a while, focused on myself and my family. Though a lot of the songs were written before that event, they were recorded after that and came to reflect that and the mood got infused in the recording. There was definitely something heavy there and introspective. “Ready to Go” was written before my father passed away, and it’s about the moments right after death, what experiences happen. It wasn’t written about anyone, but the song took over a whole different meaning after that.

OM: On the other hand, did your unborn child help inspire the more hopeful moments like “Feed on Me“?

JC: “Feed on Me” is mostly about sacrificing, and not expecting anything in return. The album covers a large gamut of experiences — it has elements of dark and elements of light. It balances itself out that way, at the risk of sounding pretentious.

OM: What did Dave Draves bring to the process as a producer?

JC: Dave and I have worked together on a few records. Working with Dave has gotten better and better. We have a great chemistry together where I can feel totally comfortable co-producing and mixing, as well as giving my input. He’s so on top of it with his instincts, and marrying engineering with production. Often you have an engineer pushing buttons and you’re left to make all the other decisions. (Dave) guides you to places you never would’ve thought of.

JC: The world is crazy right now. There was a moment when I saw that artwork where it spoke to how I was feeling right now. After this year, life got very serious and I felt like I was on my own. The Adam on the cover is kind of like the innocence being taken away. The world is becoming a restricted state where people are losing their liberties. The guy’s name is Robin Doyle, he’s from Manchester in the U.K. I was trying to find artists that would represent the record, so I spoke to him and he liked the music, we had a good connection. ■