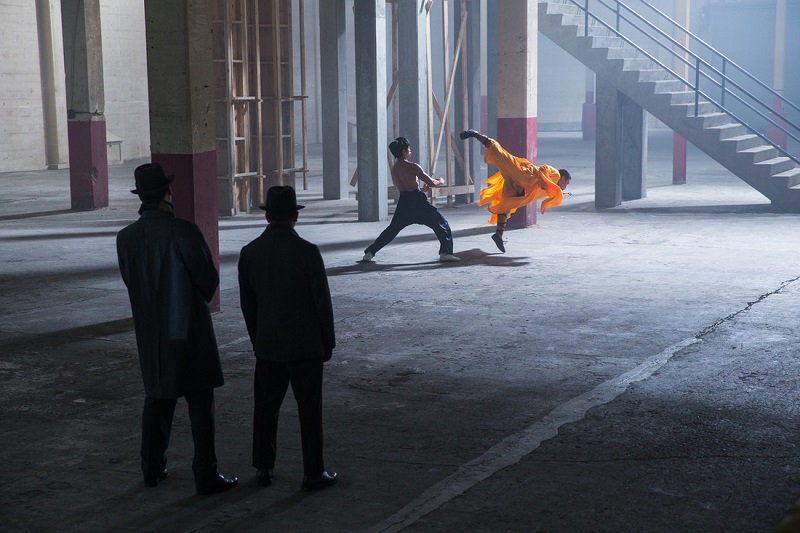 Philip Ng and Xia Yu in Birth of the Dragon.

I think you could argue that martial artists are the purest of movie stars. Their movies are based entirely around their specific skills. Their character names and motivations almost always take a backseat to the fight scenes, and everyone will very candidly admit that they see a Jackie Chan movie or Bruce Lee movie for the star, not the plot, premise or any other thing that may appeal about a film. Martial artists build an oeuvre around their physical selves, so they can rarely age gracefully or diversify seamlessly. In that sense, Bruce Lee remains the ultimate martial artist — and perhaps the ultimate movie star.

Dying in his prime never really slowed Lee down. Movies were culled together from pre-existing footage way after his death and, when that wasn’t enough, similarly named imitators like Bruce Li, Bruce Lai or Bruce Le would pop up in his stead. Still, the new Lee fanfiction (there is no way in which it qualifies as biographical) Birth of the Dragon is a fucking stretch and a half. Director George Nolfi’s film takes a real (but often contested) event (a 1965 fight between Lee and fellow kung-fu master Wong Jack Man in San Francisco) and spins a completely new kung-fu movie yarn out of it. It’s Bruce Lee’s real life given the narrative treatment of an actual Bruce Lee movie — less a metatextual exploration of the myth of Lee and more of a roundabout way to justify making a stupid movie in which the supposed real Bruce Lee beats down a mansion full of gangsters.

Philip Ng stars as Lee, who is living and teaching kung-fu at a gym in San Francisco. Lee’s apparent bastardization of the art (he wants to bring it to TV, he fights martial artists specialized in other disciplines, he teaches white people) has attracted him some ire from purists, including Wong Jack Man (Xia Yu), a kung-fu master who has come to California to do a bit of self-imposed penance for using excessive force in a match back home. Lee’s student Steve McKee (Billy Magnussen) reaches out to Wong Jack Man, hoping to garner lessons from him; instead, he winds up setting up a match between the two and driving a rift between him and Lee. Meanwhile, his love interest Xiulan (Jingjing Qu) exists under the thumb of the fearsome mob boss Auntie Blossom (Jin Xing) — perhaps Steve’s close working relationship with two martial arts badasses might be able to make a difference?

There was some controversy when the film first screened at TIFF last year over concerns of whitewashing — the film (or, at the very least, the initial edit) basically tells the story of Bruce Lee through the eyes of a white character. The film was re-edited since then, but even that accusation of whitewashing is maybe expecting too much of the narrative of Birth of the Dragon. Lee and Wong Jack Man are both the protagonists, but both are treated as unknowable elders who almost constantly speak in aphorisms and proverbs. The film treats them as unattainable legends before they even were, historically, and therefore needs the “binding agent” of Steve in order to even have them remotely resemble something other than a god emerging from the centre of a (metaphorical) mountain. McKee is such a nothing character, though, that it seems highly charitable to suggest that the film is told through his perspective. It’s more likely that the film has no perspective at all.

Somewhere in Nolfi’s confused ersatz homage-cum-fanfiction lies some of the clunkiest dialogue in recent memory. Everyone in Birth of the Dragon speaks with the same wizened Yoda-ish cadence, as if pitching their exposition to the very back row of an ambitiously oversized summer-stock playhouse. This wouldn’t necessarily be that much of a complaint if the film actually brought the kung-fu action it promises (not one of Bruce Lee’s vehicles are known for their dope-ass, quotable dialogue), but for much of its running time, Birth of the Dragon is a starry-eyed Bruce Lee hagiography presenting things that, at their very best, are enormous exaggerations of what actually happened. It’s almost never the cheap kung-fu throwback it wants to be.

That having been said, the actual kung-fu elements of the film are well-done and rather entertaining. The whole thing seems like a convoluted excuse to set an elaborate fight sequence in a multi-floored mansion where two kung-fu legends will do a thing they almost certainly didn’t do. Thankfully, like most movies that feel like they exist for one scene, that one scene is actually pretty great. What few dribs and drabs of kung-fu are interspersed throughout are actually pretty good, but Birth of the Dragon waits at least an hour before it even begins to fulfill the promise of being the kind of hokey, kind of cool kung-fu movie it so clearly resembles. ■

Birth of the Dragon opens in theatres on Friday, Aug. 25. Watch the trailer here: