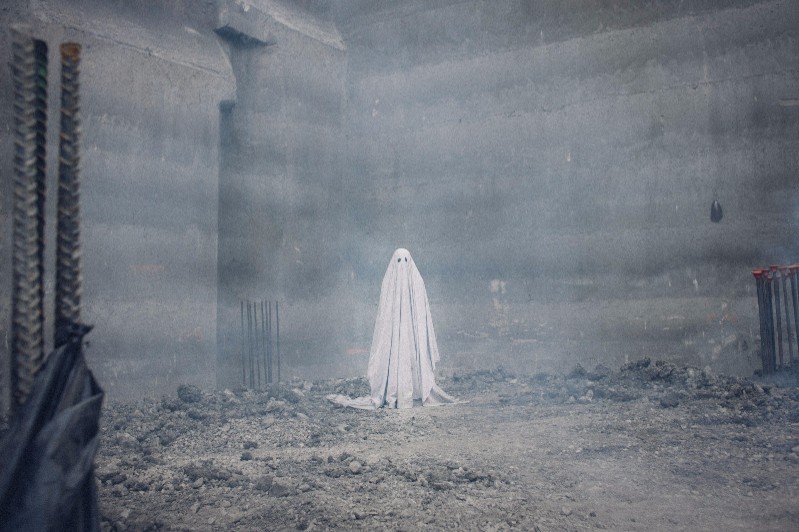 The day before I saw David Lowery’s A Ghost Story, I read an article in New York Magazine about how humankind has — at most — 70 years before climate change makes the Earth too hot for survival. This sent me into a spiral of existential despair, one that was only exacerbated when a character played by Will Oldham essentially espouses the same views halfway through A Ghost Story.

I began our chat by asking Lowery if he had read that article and if he shared in my existential despair.

“It sent me back into the existential panic I was in when I wrote this movie,” says Lowery. “Before that, though, there was an article in The New Yorker about the entire Pacific Northwest falling into the ocean and how that was long overdue. That article freaked everyone out and it won the Pulitzer, but it also begat this movie, in a way, because it set off my own existential crisis about the seemingly imminent end of humanity. When you start to see that inevitability in very clear and relatively near terms, you look at your life in a different light and the way that I was seeing my own life was keeping me up at night.”

Very light on dialogue, A Ghost Story tells the story of C (Casey Affleck) and M (Rooney Mara), a young couple who are torn apart when C dies in a car accident. Immediately after being identified by M in the hospital, C stands up and becomes a ghost — or rather, the most basic cartoonish depiction of a ghost, a simple sheet with two eyes cut out of it. C then returns to his former home — bound, it seems, to the physical place, but not so much haunting it as much as trapped by the memories and forced to watch as life continues without him, but also directly in front of his eyes.

“In the way that you described yourself as being fatalistic but still panicked about the end of humanity, I found that what I needed to do was figure out a way to remain positive,” continues Lowery. “There is an implicit pessimism and nihilism and a realism — a realistic attitude towards that inevitability — but it’s important for us to be able find ways in which to remain positive and remain optimistic. That entire monologue that Will Oldham has is very much about finding a way to be happy in light of the fact that we will all be gone. We’ll definitely all be gone someday, but given the context of the world that we’re in right now, probably sooner rather than later.”

A Ghost Story first premiered at Sundance under a certain veil of secrecy. Lowery, who had recently come out with Pete’s Dragon for Disney, had essentially made the film in secret between two high-profile projects. (His next one is a bank robbery story starring Robert Redford, Casey Affleck and Elisabeth Moss.)

“It happened so quickly that it was somewhat easy to keep it a secret,” he explains. “Everyone that worked on it knew that they weren’t supposed to talk about it. But it was very clear to anyone paying attention that I was working on something last summer because I was posting pictures on Instagram. That could’ve been a short film, a music video, a commercial. It was fine that people were aware we were making something — we just didn’t want them to know what it was. It was important to keep it a secret because I didn’t want to fall flat on my face if we failed. (laughs) I wanted my collaborators not to have egg on their face if this movie didn’t turn out, because if it didn’t turn out, I was gonna bury it. I knew that it was a high-concept idea, I knew that it was somewhat risky, and I knew that if the ghost didn’t work on-screen, the movie would fail. I wanted to have a safety net built in, and that safety net was secrecy.”

The depiction of the ghost is likely to be the major talking point about A Ghost Story: initially a comic image, the ghost becomes an increasingly melancholic and wistful image. Lowery claims that Affleck is actually under the sheet for a significant amount of the movie, though the sheet was sometimes worn by the film’s art director as well.

“Credit goes to both of them for wearing that horribly uncomfortable costume all summer long,” laughs Lowery. “The idea of a movie in which a ghost is represented by a bedsheet is an idea I’ve had for a while. The image is just so beautiful. There’s something so strong about, as you put it, a cartoon image of a ghost in a realistic setting where the context of it is very serious. Yes, it’s absurdist, yes, you laugh at it, but once you’re done laughing there’s something really sad about it. Part of the reason is that that image has so many child-like connotations; there’s a naivete about it that conjures pathos. More than just pathos — it’s somewhat pathetic. There’s a pathetic quality to this ghost that endears you to him.”

“When you reduce any image to its simplest possible state, you’re able to attach so much to it,” he continues. “You see that in Disney movies, you see it in animation or comic strips. The simpler a face is, the more you’re able to attach to it. This ghost, despite the fact that his face remains fixed throughout the entire film and in spite of the fact that he is deprived of all features except two circles for eyes, he’s very expressive and very communicative.”

In that sense, it makes the film surprisingly accessible for what essentially boils down to a slow-paced, nearly silent arthouse film. “I’ve talked to some people about how it’s very similar to Wall-E, the Pixar movie,” says Lowery. “The characters don’t speak, they just have big eyes and they communicate in a visual parlance that is accessible to everyone. If the subject matter wasn’t so dour, this would be a perfectly appropriate film for little children, because that image is so childlike and evocative.”

Another result of the film’s sparse approach to dialogue is the fact that music plays a much larger role here than it does in your average film. “Daniel Hart is my composer. He’s done the music for all of my films, going back to the shorts,” says Lowery. “He provides the movie with its final third — I take the movie two-thirds of the way to the finish line and he gets it the rest of the way. That’s a wonderful gift to have as a filmmaker, to know that you have someone else who’ll bring so much to the table for the rest of the process. In this movie, it was very clear from the beginning that music would be an important part because the script only had 30 pages. It would be a movie that would have very little dialogue, a lot of silent passages… Some of those silent passages were designed to have no music, but I knew that a lot of the movie would be pushed forward by the score. (…) That was a given, that Daniel would be an integral part of the storytelling element of the film.”

Affleck’s character is a musician, and a recurring motif of the narrative is a song that he’s writing before his death. That song, like the music in the film, does a lot of the storytelling. “He’d written that song for his band,” says Lowery. “He played it for me and I just became obsessed with it. I couldn’t stop listening to it, and I wrote it into the script. I already knew that Casey’s character was an artist of some sort because he and Rooney are basically playing my wife and I.

“I didn’t want to make him a filmmaker because that would’ve been too on-the-nose, but as soon as I’d heard that song, I realized that he was going to be a musician, that would be a song that he would sing, that it would be an important moment between the two of them. Music is so communicative, and it’s been such a part of my relationships – you can listen to a song with someone else and have a really profound experience with them that feels almost physical even though you’re only listening to a song together. When I heard that song, I just knew that that would be a defining aspect of the movie. The score, in many ways, ripples out from that song.”

There is, of course, one other scene that has already attracted a lot of press: a bravura sequence in which a grief-stricken Mara eats an entire pie left for her by a well-meaning colleague. It’s a scene that’s difficult to forget for myriad reasons (including the revelation during an interview at Sundance that Mara had apparently never had pie before).

“I knew that would be the case,” says Lowery when asked if he knew, writing that scene, that it would capture attention above almost everything else about the film. “My hope was that the scene itself would counteract whatever memeification might occur because… it goes on for so long (laughs) and it’s so emotionally sincere and uncomfortable. There’s nothing sensational about it when you actually experience the scene in and of itself. We can talk about the scene all day long and everyone will ask me questions about it — the questions are great but my answers aren’t that great because there isn’t that much I can say about it — but it’s a great talking point because it will maybe get people to see the movie. When people see the movie, they’ll know two things: Casey Affleck is wearing a bedsheet on his head and Rooney Mara is going to eat a pie. I think the bedsheet will fulfill expectations, because there’s not much it has to do in order to fulfill those expectations. The pie scene will occur and people will think, ‘Here it goes, here’s that pie scene we’ve heard so much about’ and two minutes into that scene, it’ll still be going on and they’ll realize it’s all it’s ever going to be.” ■

A Ghost Story opens in theatres on Friday, Aug. 4.