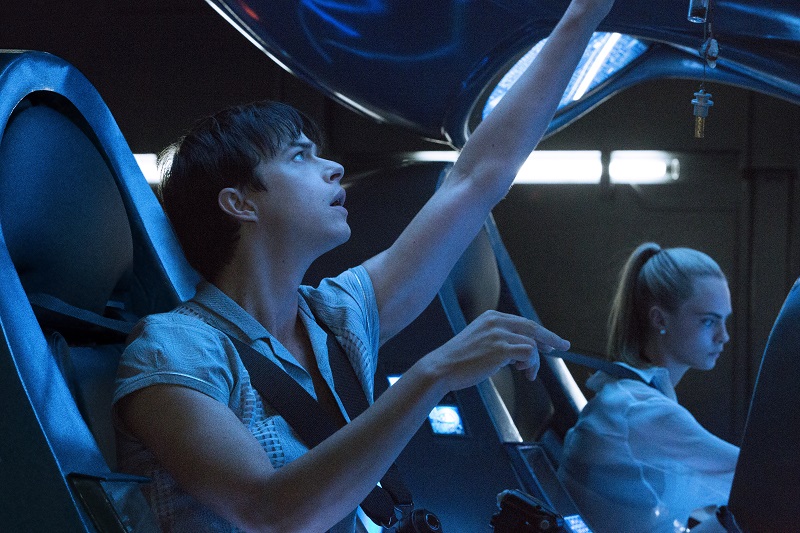 Dane DeHaan and Cara Delevingne in Valerian and the City of a Thousand Planets.

There are two undeniable facts about Valerian and the City of a Thousand Planets : Luc Besson has been waiting decades to make this movie, and this movie could not really have been made anytime before today.

The visuals of this deeply fried, deeply French psychedelic space opera would never have been possible without current advances in technology – but a lot of time has elapsed since the inception of this project, and what was once the most fantastical, out-there sci-fi world imaginable has now become commonplace in mainstream filmmaking.

It’s undeniable that Besson’s approach to the visuals is unbeatable – rarely has a film so effectively translated drawn images – but everything else about Valerian is more than a little dull. Considering this is a movie where Rihanna plays a shapeshifting stripper, that’s very bad news indeed.

Dane DeHaan stars as Valerian, a spatial government agent who cruises around the galaxy with his partner and unrequited love interest Laureline (Cara Delevingne), doing whatever it is their superiors need doing. In this particular case, they’ve been tasked by their commander (Clive Owen) to find a little armadillo-looking thing in a virtual market. The little armadillo thing is the last of its kind, a critter capable of essentially pooping out carbon copies of whatever it eats; this is useful to the commander for whatever reason and also useful to Valerian because a dying being from the planet where said critter originally dwelled has psychically implanted itself in Valerian’s soul. This involves a lot of cross-galaxy adventuring, befriending the aforementioned shape-shifting stripper, a big Jabba the Hutt type guy voiced by John Goodman and more trippy, gooey space shenanigans than I can possibly concisely explain in this space.

To give Besson credit where credit is due, the world of Valerian is a fully realized one. Besson goes whole hog in depicting the lysergic, candy-coloured worlds seemingly ported directly from album covers by Hawkwind and Herbie Hancock (who improbably cameos as a senior officer of Valerian and Laureline’s) and packing every scene with a turbo-charged array of creatures that feels like the cantina scene from Star Wars multiplied by 1,000.

Valerian does a thing that I usually appreciate in franchise starters: it drops us in the middle of the action, with Valerian and Laureline already seasoned agents with a well-established past rather than an origin story. In this case, however, it yields diminishing returns – the world is not one we’re particularly familiar with and, while Besson is clearly enamored with all of the film’s textures and creations, they soon take a backseat to the generally uninvolving shuttling of MacGuffins that makes up the plot.

I often rail on unfollowable nonsense in blockbuster cinema, but if anything, Valerian and the City of a Thousand Planets is altogether too followable. Owen’s character is immediately coded as villainous and yet we’re forced to watch him slide into villainy slowly to no one’s surprise. The specifics of what they have to do are shrouded in the unknowability of all these planet names and the tenuous tenets of space democracy, but it becomes pretty obvious pretty early in that you don’t actually need to know anything to know what’s going on. The comic books were built (much like Star Trek) around big, liberal social ideas rather than, say, merchandising, and while it’s nice to see a movie full of explosions and shiny, gooey CGI that wants to say something about human nature, it kind of gets lost in the shuffle.

DeHaan and Delevingne may seem like bizarre choices for sci-fi space opera leads – and they are! DeHaan remains a difficult-to-cast actor, clearly talented but possessing more character actor chops that leading-man charisma. Delevingne has a similar quality – striking, somehow unconventional looks and a talent that doesn’t necessarily lend itself to the kind of high-profile parts she’s been getting. Both are interesting casting choices, and while they independently fare pretty well with their parts, their relationship is so cold and their chemistry so lacking that the parts of the film where their characters are split up prove to be more compelling than whatever half-baked love story they’re saddled with.

Part of the problem with the Valerian universe is that, while the comic books are not particularly well-known in North America (even in Quebec, where European bande dessinée is pretty much part of the culture), their DNA has found itself all over science-fiction of the last 40 years. There’s a lot of Valerian in Star Wars, in Guardians of the Galaxy, in Independence Day, in Vin Diesel’s dumb sci-fi movie odysseys that only he cares about and even in Besson’s own The Fifth Element. It’s a rich universe, but one that’s been poached from over and over again by other films. As recently as six or seven years ago, before the new crop of Star Wars films and the Guardians series, Valerian would have been completely mind-blowing.

At it stands, it’s a real visual mindfuck but a dull throwaway narratively, with a circuitous plot that makes it feel like you’re watching video game cutscenes while diligently waiting for your turn. It’s clear that Besson has real love for this property (you don’t make the most expensive independently financed film of all time based on cursory enjoyment), but it ultimately only comes across in fits and spurts. For all of its great ideas and whacked-out imagery (and Cara Delevingne wearing a giant hat/plate that a bulbous monster squirts lemon juice all over is a decent one), it kept me thoroughly bored. ■

Valerian and the City of a Thousand Planets opens in theatres on Friday, July 21. Watch the trailer here: