The Fantasia film festival is happening at several theatres (primarily on Concordia University’s downtown campus) through Aug. 2. Here are our reviews of films screening over the next few days:

I love zombies, and anxiously anticipated Dead Shack after watching a crowdfunding teaser. It was Night of the Living Dead meets Stranger Things; foul mouthed, cardboard and duct tape clad tweens argued over gear while zombies approached their shack. It was amazing and hilarious. Unfortunately, a larger budget saw the tweens replaced with teens, real “gear”, and a script that was not adjusted accordingly; therefore much of the humor seems to have been lost. First time director Peter Ricq touted it as The Goonies meets Night of the Living Dead, but the end result is more The Walking Dead meets Bill And Ted’s Excellent Adventure, with an antagonist (well played by Lauren Holly) who is a hybrid of Michonne and The Governor.

Summer, her younger brother Colin, his hapless best friend, their jackass father (who is trying to be as cool as his children) and his narcissistic girlfriend go on a family vacation to the best thing their father could afford on Craigslist – an isolated “murder cabin”. While exploring, they stumble across a neighbour’s home (Holly’s), and are caught witnessing what they deem to be cannibalism. A desire to do the right thing, combined with the neighbour’s need to preserve the status quo, fuels the remainder of the narrative.

Dead Shack appears to be a self-aware film, yet the characters are inconsistent, in that they seem ignorant of the existence of zombies, and then “gear up” like seasoned pros. The films strength is its stunning cinematography, particularly the aerial work that is reminiscent of The Shining and creates a strong sense of place and isolation. Meanwhile, it never quite finds the right tone. Much of the time, it’s neither scary or funny, but more of the jokes land in the latter half. The effects are great, a solid combination of practical and CGI with decent gore. It may not be the best zombie film, but it should be a great deal of fun to watch with a Fantasia audience. (Katie Ferrar + Mark Carpenter)

Ron Goossens, Low-Budget Stuntman is the latest work from Steffen Haars and Flip Van der Kuil, the team behind the New Kids franchise, which does not go unacknowledged in this film. For those unfamiliar, Ron Goossens is what you might get if the Trailer Park Boys, Fubar and Jackass had a Dutch baby who was the godson of Simon Pegg. The film is hilarious, falling squarely in the vein of wonderfully tasteless and often absurdist Euro-comedies.

Ron is a second-generation alcoholic of rather epic proportions. His drinking buddy/enabler, and heir to the local pub, films Ron performing a driving stunt that ends in foams and the soon to be infamous line “I’m totally shitfaced.” The video becomes a viral sensation, leading a local PR lowlife to offer to be Ron’s agent – promising a career as a low budget stuntman. Ron is indifferent to his fame until his very unfaithful wife, to whom he is devoted, despite his seeming drunk indifference, announces her pregnancy and presents him with a two-week ultimatum to sleep with Dutch movie star Bo Maerten (who plays herself and seems to be a Dutch equivalent of Megan Fox), a seemingly impossible feat, or she will abort the child. Ron is forced to accept the challenge, and strives to regain his family. This sends him down a slapstick and transformative path the likes of which would not be found in North American cinema.

Ron Goossens is a remarkably genial, likeable comedy given its gleeful indifference to PC norms. (Some of the racial jokes, notably Ron’s Black Peter costume, will certainly give some viewers pause.) For New Kids and other genre fans, the film will not disappoint. For the unacquainted, get out and see this movie! (Katie Ferrar + Mark Carpenter) 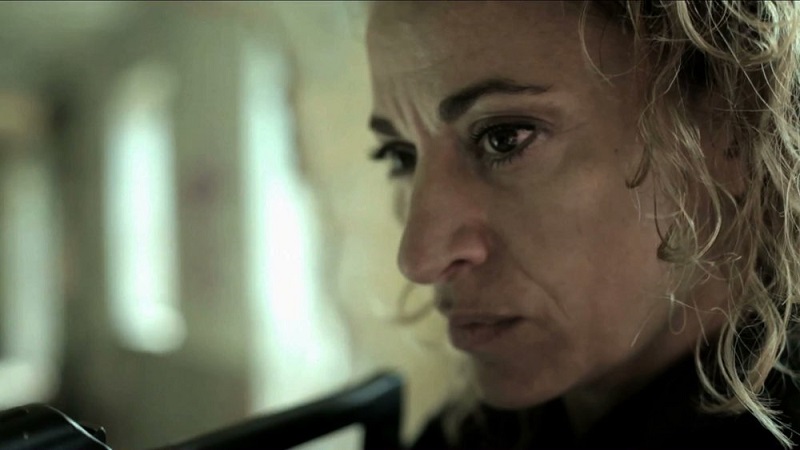 The Night of the Virgin

The Night of the Virgin is a Spanish film in the proud transgressive tradition of Bunuel and early Almodovar, with some Dead Alive-era Peter Jackson thrown in for good measure. It’s for all those sick puppies out there who will not only sit through a movie with liters, upon liters of different bodily fluids being spent, but might also derive some entertainment or pleasure from it. The film is grotesque and perverse in the most extreme sense, and it’s also very funny much of the time, though the laughs eventually wear thin.

Nico, an awkward and unattractive virgin, attends a New Years party at a club with some friends with the goal of getting laid. After numerous brushoffs, an older woman (who could easily be his mother, but is referred to as a “granny” by his friends) expresses interest and he follows her home. What ensues is an increasingly depraved series of events inspired by a fictional Nepalese goddess of the unborn named Naoshi, and an associated fertility ritual. There are everything from cockroaches, to assault, to rape, to an overextended graphic birth scene, and every possible bodily fluid.

While all of this may seem potentially traumatising, the film is surprisingly devoid of tension; this stems from the fact that the scenes are numbingly overstretched and overlong. It’s not the kind of film during which one would typically want to eat, or even contemplate food, but we became so blasé about the content that we did. The film does have truly impressive practical effects. These do not go unnoticed, especially at the end of the film. The Night of the Virgin  is worth seeing if you have the right appetite. (Katie Ferrar + Mark Carpenter) 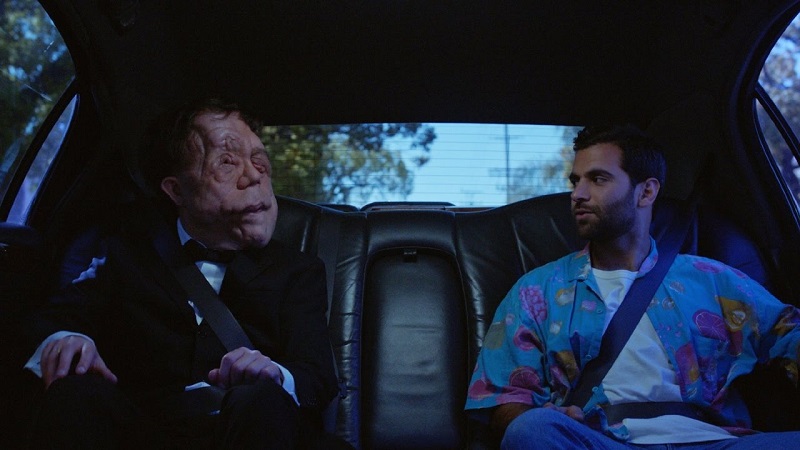 A small man brandishes a baseball bat and goads a towering bouncer who reacts by bloodily beating him up. This was the ridiculous and violent concept of the staged viral video that gave Iranian-Norwegian comedian Amir Asgharnejad worldwide “Internet fame.” It also attracted the attention of a Los Angeles advertisement firm convinced Asgharnejad could be the centrepiece of a cutting-edge campaign for an energy drink company.

Norwegian director Kristoffer Borgli tells the story of the ensuing chaos in Drib, a satiric, partly fictionalized documentary. Borgli claims the energy drink company threatened litigation, thus he invents an energy drink of his own, using re-enactments and actors to portray everything that happened between the advertisement firm and Asgharnejad, who insists on playing himself.

The result is an entertaining take on the general silliness of the advertising world — from the overly zealous personal assistant to the in-house director who moans about his lost, artistic career. Brett Gelman (Love) completely steals the show as Brady Thompson, the nutty ad exec. Unstable and desperately trying to be cool, Gelman dishes out ad terms and explodes at anyone who criticizes his “brilliant” ideas. Meanwhile, Asgharnejad stands around like a confused and amused bystander, reflecting the audience’s reaction to this ridiculous advertising world and shit-disturbing at every opportunity.

Although it won’t teach you anything new, it’s a stylish and funny piss-take on how desperate these “ad people” are to monetize on anything that’s “trending” at the moment. The odd meta-moments scattered throughout make me wonder if the whole story was simply invented for our entertainment, but perhaps that’s the point. While Asgharnejad is the undisputed protagonist, I think I would have preferred to follow Gelman around and I’d even envision an Office-like TV vehicle for his neurotic character. With the amount of ad agencies in this city, I’m sure you know a person or two who could guiltily relate to the whole mess. (Roxane Hudon) 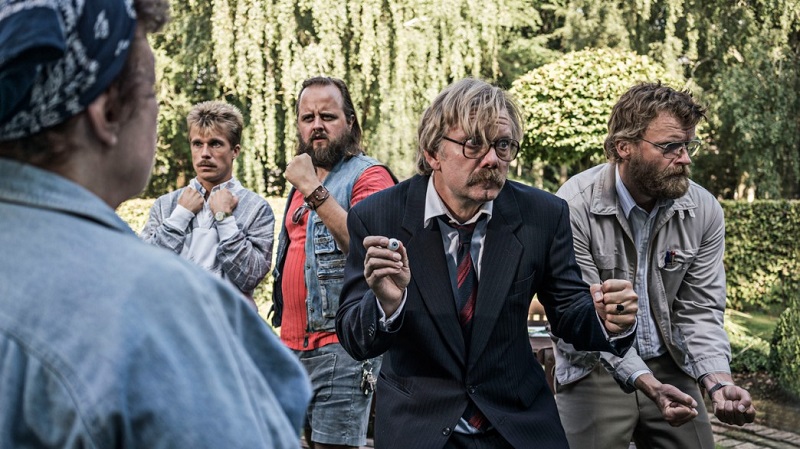 Dan Dream is the latest film from Danish comedians Frank Hvam and Casper Christensen; the guys behind the painfully tasteless, and hilarious, Klown. It won the Cheval Noir award at Fantasia in 2011. This film uses the same basic comedic approach; it gleefully flaunts PC norms, largely due to the abundance of racism and homophobia, and presents a worldview that renders all characters equally idiotic.

Dan Dream is loosely based on the efforts surrounding the construction of the world’s first electric car in Denmark in the early 80’s, and the disastrous official launch of the vehicle in 1983. The creative team seem as ill prepared for the world as the world is for the car.

Christensen plays the real-life inventor/entrepreneur Thorkild Bonnesen, who gathers a motley crew of misfits to make the car and win a bet. This crew includes: the hapless engineer Jens (Hvam), his bitter, dissatisfied wife and miserable daughter; the barely-closeted Per and his rabbit Freddy Mercury; and the one-armed Vonsil, who has a perverse interest in Thorkild’s Ghanaian girlfriend. The team relocate to a remote town, exploiting economic subsidies to build their car.

Much of the film’s comedy is the result of the friction between the city-people from Copenhagen, and the crass, narrow-minded citizens of the town, the most notable of whom is the pompous, glad-handing mayor. Dan Dream doesn’t hit the mark nearly as often, or as effortlessly as Klown. Tonal problems abound. A subplot involving spousal abuse finds an uneasy middle ground between sentimentality, and the team’s typically transgressive approach. There’s a great deal of ironic 80’s nostalgia, and a late turn toward the heartwarming and inspirational feels forced, and somewhat false. The true-life basis for the story may be the source of some of these issues. Dan Dream has a set of committed, sometimes inspired comedians at its disposal, yet it never realises their full potential. It’s funny enough to merit seeing, but only just. (Katie Ferrar + Mark Carpenter)