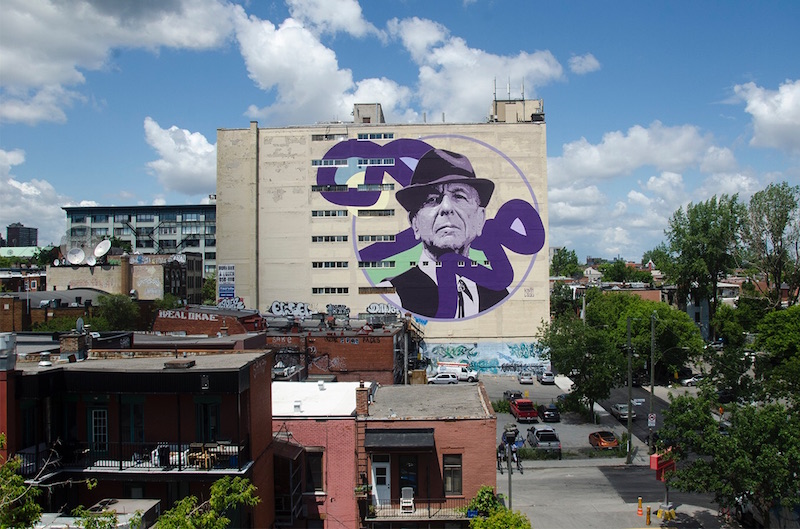 Mural of Leonard Cohen by Kevin Ledo. Photo courtesy of the artist.

The sun scorches the back of my neck as I walk through the Plateau along St-Dominique. Looking up, I notice a large pair of soulful eyes peering over the rooftop of a quintessential walk-up triplex. I stare back in bewilderment — I know these eyes, but I don’t. I trek through the street to investigate and find myself before a gigantic, partially finished mural of Leonard Cohen.

A flock of clouds sweeps over the blaring sun, allowing me to take in the presence of Cohen on a wall in his old neighbourhood. Forgotten are my woes, and instead his soul-healing lyrics echo through my mind. I unofficially dub him Saint Leonard Cohen — a silent sentry, a patron saint to all artists, creators and audiences alike.

The soul of the city’s most-beloved artist, Cohen was successfully immortalized by Kevin Ledo, a Portuguese-Canadian artist based in Montreal, during MURAL Festival this past June. To investigate the process and development of this mural, I spoke with muralist Kevin Ledo.

Mira Silvers: Describe the artistic process of developing this concept for this mural on Leonard Cohen?

Kevin Ledo: I began researching photos of Leonard Cohen in recent years, and shortlisted about five that I really liked. Then I began trying a few different mock-ups, with different compositions and colours. In the end, I was satisfied with the seventh one. We reached out to the photographer, Yoan Valat, and asked for permission to use his picture. Once we got the greenlight, it was time to figure out how I would scale up this image to 130 feet!

MS: What about Leonard Cohen’s work attracts you personally?

KL: In his music, I relate to the melancholy and beauty, the joy and the stories, his longing lyrics and his clever poetry.

MS: What is your favourite Cohen creation?

KL: I’m not quite sure, I always have a hard time choosing favourites. Some hit me at times more than others.

MS: Is this the largest piece you have created?

KL: Yeah, at least twice the size of what was previously my largest mural.

MS: Can you describe how you tackled a mural this size?

KL: I drew it out with a paint marker taped to the end of a pole, using a photo of the wall that had my drawing superimposed on it. I knew more or less where to draw, using windows, paint chips or any markings on the building as reference points. I also often counted [the] bricks to know where things [would] go.

MS: What are the challenges to drawing and painting a piece this large?

KL: The sheer scale was exhausting — the sun, heat, wind and cold, and the long days. My stress levels were a good thing and a bad thing.

MS: Did you use a projector? Why or why not?

KL: I decided not to project it, mostly as a personal challenge to myself and to end this discussion, once and for all, of whether it’s okay for me to project my images when painting murals. I think that this non-projected monster wall will be a pass for me to project my murals from here if I so choose (laughs).

MS: Did you have an assistant with you on board?

KL: I had Ben Paloquin, who was operating the lift almost the whole time. He prepped the wall and helped me with rolling out the flat areas. Melissa Del Pinto helped me out one day, and a couple of other days I was flying solo.

MS: How long did it take to complete?

MS: Had you anticipated it would take that long?

KL: I actually figured it would take three weeks. I just didn’t realize that I would be doing such long days. I could have used another week and shorter days.

MS: With a mural this size under your belt, do you find you prefer painting on larger scales or on smaller ones?

KL: Perhaps I’ll stick to some smaller ones for now. Maybe if the conditions are right, I’ll get back on a large one.

MS: What are the safety protocols of painting at such heights?

KL: I needed certification to use that machine, the largest boom lift the Genie makes. Also, I had a harness and a helmet. No one could hang out or park under us, because a brush dropping from that height could do some real damage.

MS: Any last thoughts or comments you want the readers to know about the mural or about your work?

KL: My adventures continue—next I’m heading to Amsterdam for a project. After that, I’ll be in Lebanon for another. I plan to continue painting murals as well as focus on my oil painting when I’m home in Montreal. ■

Kevin Ledo’s portrait of Leonard Cohen can be found behind Moishes Steakhouse (3961 St-Laurent), visible from St-Dominique just north of Napoléon. More of his work can be found here.