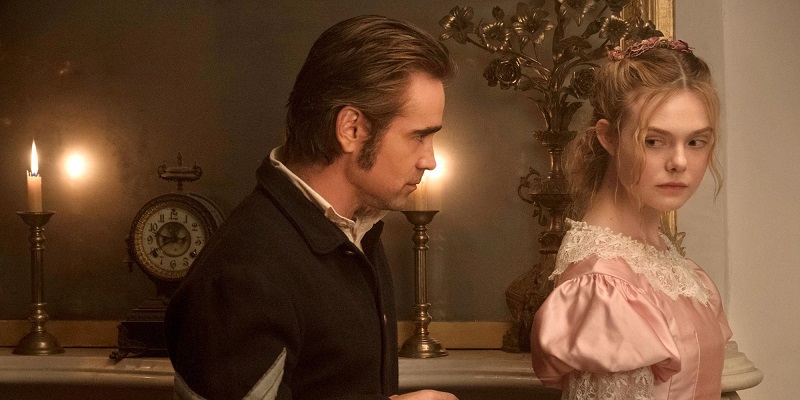 Colin Farrell and Elle Fanning in The Beguiled.

Until this remake came along, Don Siegel’s The Beguiled was one of my favourite films to recommend. So much of it seems familiar when you haven’t seen it — it’s a period Clint Eastwood movie from the ’70s that never quite gathered the cultural cachet of a Dirty Harry (or even a Paint Your Wagon) and one would assume it to be a middling Civil War Western at best.

The Beguiled is actually a fairly twisted psychosexual horror film that raises more questions than it answers. It’s a peculiar choice for a modern remake when you consider how hermetic and self-contained it is, not to mention how specifically 70s its themes and sexual politics are; in many ways, a remake of The Beguiled should be more akin to a revival of a play. I certainly would not have expected Sofia Coppola to be the one to step up to the remake. Coppola’s favourite thematic bugaboo is white women caught in states of stasis, so I suppose it’s not that much of a stretch, but the film’s more prurient angles aren’t exactly in Coppola’s wheelhouse.

Martha Farnsworth (Nicole Kidman) runs a girls’ school alongside Edwina (Kirsten Dunst) in Virginia in the midst of the Civil War. Isolated in the war-torn South, the women have not seen men in ages when wounded Yankee soldier John McBurney (Colin Farrell) is found by one of the girls on the school’s grounds. Badly injured and in dire need of medical help, McBurney is taken in by the women despite their complete aversion to Yankees. The presence of a masculine figure in the house sends shockwaves through its repressed atmosphere (especially for the oldest girl in the house, played by Elle Fanning), finding the women sneakily fighting for attention from McBurney, a relative enigma whose motivations seem cloudy at best.

There’s a lot of controversy brewing over what many have identified as Coppola’s whitewashing of the story — there were women of colour in the novel and in the original film who have been excised and explained away here. (I’d invite you to check out some pieces by people more qualified than I to address these issues.) That having been said, it seems to me that there is very little attempt on Coppola’s part to situate this in a broader context. It’s almost like a fable taking place in its own little world.

It’s also pretty faithful to the original in most ways. A character has been eliminated (see aforementioned whitewashing business) and at least one wack-ass ’70s flashback excised, but generally speaking Coppola approaches the material in a very similar manner. Where 2017 Beguiled differs most is in its perspective. Siegel’s film was told more or less from McBurney’s perspective, whereas McBurney here takes a passive role as an object of desire without much of a personality. That’s a pretty radical shift in terms of theme — where Siegel’s film had somewhat of a regressive view on sexual desire literally turning to torture, Coppola turns the story into a sinister comedy of errors where egotism is just about the only error.

The Beguiled is surprisingly funny when it needs to be. Kidman is particularly in tune with the material, turning in a measured performance that threatens to boil over into camp at any time but never does. Her performance does exemplify my biggest problem with the movie: though Coppola seems to understand that there’s something inherently over-the-top and exploitative to the material, she’s also taken it upon herself to class it up at the same time. It’s a gorgeously mounted film, with incredible costumes, sets and lighting that suggest an infinitely more sedate film than what we have here. The clash is intentional, I’m sure, but it also seeps into the third act of the film, which feels somehow far too tasteful for the movie that precedes it.

I’m fairly vocal in my distaste for dusty bodice-rippers and tweedy period dramas. The Beguiled fits neither of those categories neatly, but it does sort of toe the Merchant-Ivory line at times, stripping away the pulp at its core and carefully taking a step back in favour of… well, I don’t know, exactly. The Beguiled is certainly funny, entertaining and well-acted (and, at a trim 90 minutes, something resembling a multiplex miracle) but it also feels like it’s operating under the auspices that audiences can’t handle the entirety of The Beguiled. If there’s one thing I find more annoying than people in petticoats having arguments in the sitting room, it’s being condescended to as a viewer.

It would be reductive (and, frankly, inaccurate, considering I do think this is a pretty good movie) to infer that Coppola didn’t really understand the source material, but there’s definitely an attempt to turn this into a capital-F film, which definitely takes away from the gutsy immediacy of the material.■

The Beguiled opens in theatres on Friday, June 30. Watch the trailer here: