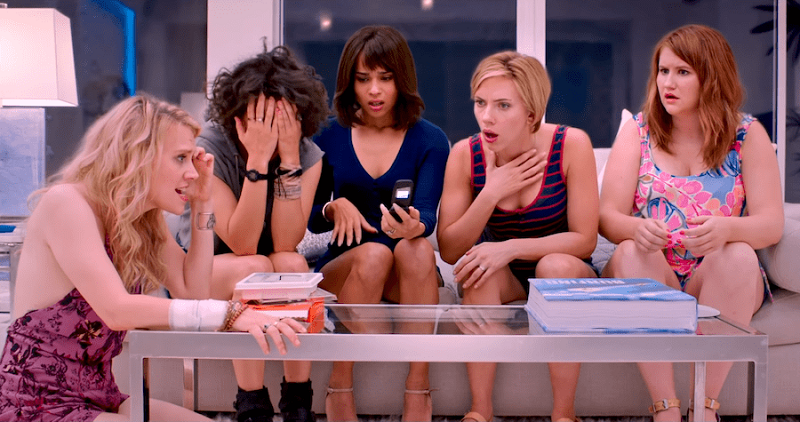 If you want any proof that there’s a gender imbalance in Hollywood, consider the fact that it took 10 years for the “female Hangover” to get made.

I doubt that writer-director Lucia Aniello was shopping the project around at the time, but considering the amount of sub-Hangovers featuring semi-famous brodogs that came out in that movie’s wake, the absence of anything resembling a shake-up of the structure is suspect. Rough Night is ultimately not very different in tone, substance and style from that kind of movie – big studio comedies that play on a raunchy and perhaps controversial set-up but ultimately play out in a safe and heavily codified way and sometimes (but not always) end with the entire cast dancing at a party – but there’s really no reason why it can’t utilize the talents of comic actresses once in awhile.

Jess Thayer (Scarlett Johansson) just so happens to have planned her wedding right in the middle of her big election bid (she’s running for senate, but the haircut and references to her uncouth rival who loves tweeting dick pics and has a hard-on for destroying social programs are certainly trying to draw some obvious parallels), which means she’s torn about leaving her soon-to-be husband (Paul W. Downs) to go party in Miami with her best pals: codependent, party-hardy Alice (Jillian Bell), queer activist Frankie (Ilana Glazer), prim-and-proper Blair (Zoe Kravitz) and Australian hippie Pippa (Kate Mckinnon). Everyone has a very different idea of what partying hard 10 years after college looks like, but no one really expects that Alice is going to knock over the hired stripper and crack his neck.

Shades of Very Bad Things abound, but Rough Night ultimately proves to be significantly less dark than its premise suggests. To be honest, I sort of think Very Bad Things is garbage, but it also belongs to a way different era of comedy filmmaking than this film does. Though Aniello comes from a particular universe (she and Downs – who co-wrote the film – both worked on Broad City), Rough Night is a very traditional studio comedy down to the slow-motion scenes of people partying and the incongruous cameos by either a TV star cast against type or someone who’s still famous despite not really being in anything anymore (it’s both, in this case – Ty Burrell and Demi Moore appear as the swinger sensualists living next door to the rented beach house).

It’s both good and bad news. This kind of tone is more consistently funny than, say, the unrelenting bleakness of the aforementioned Very Bad Things, but it also relies on a particular gag alchemy that’s become extremely familiar. There’s some falling down humour, some jokes where the entire punchline is that something is shaped like a dick, a third-act reveal that nothing is as it seems, a supporting character who spends the entire movie zonked out on illegal drugs that they may or may not have ingested accidentally, and so on and so forth.

Suffice to say that in a movie like this, the jokes matter less than the people telling them. Scarlett Johansson doesn’t do much straight-up comedy now that she’s one of the most bankable female action movie stars (if not the only one), but she’s good here as what ultimately proves to be the straightest role in the film. Bell is more typecast (there’s not much difference between her character here and the one she plays in Fist Fight, except, perhaps, their upper of choice) but she remains an underrated and underused comic weapon. Glazer and Kravitz have the least developed characters, though both get some choice moments, and Kate McKinnon is great. Just great. I am okay if Kate McKinnon shows up in every single one of these movies until she, like Kristen Wiig before her, gets stuck in a whirlwind of good-but-underseen indie films.

Is Rough Night funny, though? Yes, frequently. It’s the epitome of a familiar story well told – never really breaking any barriers or being particularly adventurous in its mise-en-scène but remaining fully aware of its cast’s various talents. It’s hard to pinpoint anything that particularly stands out within the film, partially because everyone is doing what’s so natural to them. At the risk of exposing myself as the white cishet shitlord you most certainly suspect me to be, the scenes with Downs and his buds (which include Hasan Minhaj, Eric André and Bo Burnham) having the most milquetoast bachelor party imaginable really resonated with me – but you knew that.

Generally speaking, the most satisfying moments of a film like Rough Night are the throwaway moments rather than the inevitable beat in the third act where we re-evaluate what our idea of friendship is along with the characters and their tearful monologues. We’re at a point now in cinema where mainstream film comedy is completely dwarfed by television; the success of Broad City allows Glazer, Aniello and Downs to make a straight-up movie that will play in multiplexes around the country (and probably make a real nice paycheque), but that movie contains about a 10th of the daring and the humour you’ll find in that show. That’s a problem that doesn’t live and die by Rough Night, but one that’s certainly worth looking at. The version of Rough Night we have now is not my preferred reading of this material, nor the best one that I know this team is capable of giving, but it might be the only one possible at this point in time. ■