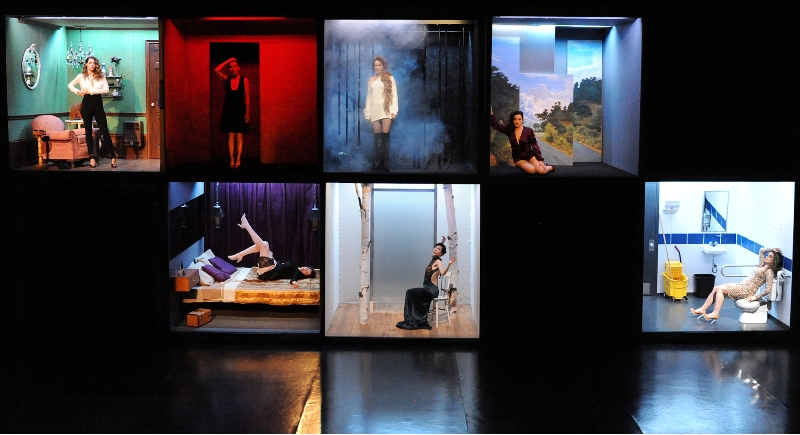 Marie Brassard, who was recently awarded the Order of Arts and Letters of Quebec, is the grande dame of Quebec theatre and a former collaborator of the legendary Robert Lepage, with whom she travelled the globe for 15 years. After her first solo, Jimmy -Creature of My Dreams touring 22 countries to her latest, Peepshow, starring Xavier Dolan mainstay actress Monia Chokri, she is now directing a series of collages of the intense, Faulkner-esque writings of Quebecoise writer Nelly  Arcan.

Brassard’s play, Le Fureur de ce que e Pense, being presented at Festival TransAmeriques 2017, goes beyond the trashy media obsession with Arcan (who ended her own life way too soon) and portrays her writings and life in the poetic light they deserve. Some of Quebec’s best actresses become  inspired by the writer, who’s been praised as a philosopher by Margaret Atwood and as a writer’s writer by Nancy Huston.

James Oscar: You’ve often spoken about incredible stories of the old Montreal that was part of Nelly Arcan’s formative years — the late ’90s and this loft building you lived in.

Marie Brassard: The building was extraordinary and for 20 years and was inhabited by artists of all ages and disciplines. I wrote a show about this place called La Noirceur (The Darkness). One day, like what happens in many cities, there were real estate people who bought the building and slowly the residents were chased out. We were victims of this violent gentrification, and with a great sadness, bit by bit the area was being transformed by the violence of this real estate development. The years at 10 Ontario were incredible because we lived with so much freedom.

There was no uniformization  that people try and impose more and more — as much in architecture like in the Quartier de Spectacles. I am not a fan of that. I believe culture must be alive and should manifest itself in all possible ways and aesthetics in all the neighbourhoods. At night, I could see each window lighting up one by one and I knew that behind every window there was as an extraordinary story I would never know. Nelly Arcan was developing her craft in that era.

JO: Maybe it is a big leap but, as a man, her novel Folle is hard to read since it really is an eye-opening slap in the face. It zeroes in on how destructive the male gaze on women is — more than any book I have ever read. I think of those unscrupulous real estate developers almost like colonizing these artist neighborhoods and the way Arcan wrote about men staring at her body. I find something common  in this uniformization or appropriation of art neighborhoods and the commodization of the female body that she so viscerally wrote about.

MB: There is something that comes through over and again in Arcan’s writing. She always implied that she should not be here living this life, like there had been some mix-up, like she was an error. And when I talk about her political and feminist dimension, she had a relationship with her own body and the feminine physical condition that was extremely hard – plastic surgeries, obsessed with her own beauty, terrified of aging, to see her body degenerating, this pressure that she did not have the right to be alive. This is a common vision among women who are sad because of their own bodies, because they don’t correspond to the criteria for beauty that were created by bourgeois society – most times masculine or the other woman’s gaze, but always in relation with the male gaze that “gives” the right or not right to exist.

The parallel I would make with what you suggested is the same feeling we had at 10 Ontario – the incredible hate with which the real estate developers treated us, the artists. They had a way of looking at us like we were humans with a different quality — because we were artists and because we were poor. So in Nelly Arcan’s work, there is something about the relation of the oppressed to the oppressor. She was a victim of how other people looked at her. It could have been a fabrication of her own thinking – maybe, but that cruel gaze does exist. So she had this constant pain of being judged.

When she was invited onto Tout le Monde en Parle, she was very saddened. People made remarks about her body, the way she dressed, about being sexy, about her provocative side, but didn’t properly consider that this was a woman who wrote literary books. But of course, at the same time, she loved encouraging this desire from others. She provoked it, but she also suffered from what she was provoking. Sometimes I think she just had the wrong people around her.

When you read her book Putain, you see she was a very intelligent, articulate woman — so advanced  in her thinking. But some people saw her as a blonde bimbo. There were people who would not even read her books because they had judged her because she had been an escort and had plastic surgery. And my desire in doing this show was to not go into the childish media sensationalism about her. I really wanted to emphasize the content of her writing.

JO: How you do that in the show?

MB: I did not want Nelly Arcan to be personified on stage. It is a collage inspired by her writing where I created seven rooms, with seven women talking through her. Each room is articulated around a specific subject Nelly Arcan writes about: there is the Song /Room of Mirages where it addresses questions of appearance, mirrors, image, body image; the Song/ Room of the Serpents address madness, religion, unbalance, God. In each room, set designer Antonin Sorel took time to think through how to elaborate it in a way to implicate the actresses. It’s a huge building on stage, with the rooms inspired by the windows in Amsterdam’s Red Light district and also by Barbie doll boxes.

I wanted to musicalize Nelly Arcan’s texts. With Alexander MacSween, we figured out a way for the texts to sometimes be sung or the interpretation to be rhythmic and not psychological.  And there is one room that I call the Room of the Lost, which is embodied by the dancer Anne Thériault. She is the only one who leaves the rooms and goes from one room to another. And her character remains alone at the end of the piece. It gives a sense of hope, almost.

JO: In Arcan’s writing, there is always this incredible paradox that moves between pain and pleasure — her being caught in it but also maybe finding pleasure in this pain?

MB: There are so many interesting aspects in her work and personality. In terms of my stage direction of Fureur, the reason I chose these actresses and the way I present them on stage – I wanted it to be a seductive aesthetic, that it would be something beautiful to look at and that the women would be gorgeous. This was to undo the idea that it’s a bad thing to be attractive because Nelly Arcan was judged for this.  I don’t think she didn’t want people to not look at her, but she didn’t expect others’ gazes to be so cruel and ruthless.

She also had her own hard and ruthless look at the world. Sometimes when I read her work, I say to myself, “Wow she is so harsh in looking at and judging humans. Very little compassion.” But at the same time she judged herself very harshly. It is almost like there was always a disconnect and misunderstanding between her and  the world, between her and her existence. There is something that just never worked. I talk a lot about this in the show.

JO: It sounds a lot like contemporary lives and how many of us feel. Shakespeare says, “Something is out of joint.” How do you show this in the show?

MB: You will see the way I have asked the actresses to play it. It is never complacent or sad. This is not what I wanted on stage. There are all sorts of things that are transposed: seduction, suffering, incomprehension. You see this in the rooms  her view of the world  is that she just does not understand.

There is a storm inside of her because she does not understand the reason for her existence, almost as if she felt like an impostor. I wanted to show the rhythm of her writing. The other day looking at rehearsals, I felt like I was looking right at the spirit of Nelly Arcan. ■

La fureur de ce que je pense is on (in French with English over-titles) at Usine C (1345 Lalonde) from June 3-6, sold out