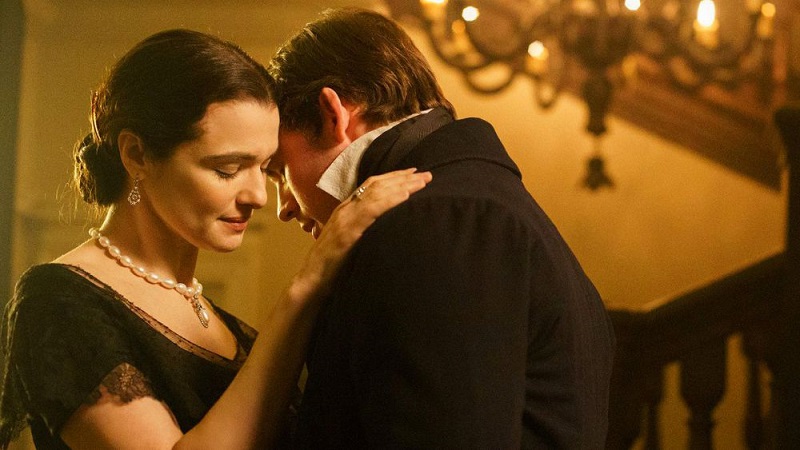 Rachel Weisz and Sam Claflin in My Cousin Rachel.

Daphne du Maurier’s novel My Cousin Rachel has already been adapted to the screen at least twice (once in 1952, with Olivia de Havilland and Richard Burton, then more recently on the BBC), but the familiarity of its narrative extends way past that.

You’ll find shadows of it in droves of your-lover-isn’t-who-you-think-they-are thrillers from the ’80s and ’90s; you’ll find it in nearly every derivative airport novel/glossy-covered beach read imaginable, regardless of quality. Like the two best-known adaptations of du Maurier’s work (that would be The Birds and Rebecca, both by Hitchcock), the narrative framework of My Cousin Rachel has essentially become a cliché in itself.

The appeal of a straight adaptation in 2017 should therefore not rest on its narrative ingenuity (which has already been rendered irrelevant by so many Shannon Tweed movies) but on its texture and detail, two things conspicuously absent from Roger Michell’s bloodless, airless adaptation.

Orphaned at a young age, Philip (Sam Claflin) is raised by his cousin Ambrose on a sprawling estate in England. As Philip ages, he has less and less contact with his beloved Ambrose, who is forced to take time away in Italy to treat health problems. Eventually, Philip starts receiving letters from Ambrose describing his meeting of another cousin, Rachel (Rachel Weisz). Ambrose is smitten by Rachel and decides to marry her; as time progresses, however, Philip receives progressively more panicked and pleading missives from Ambrose, who claims that Rachel is actually harming him. Philip travels to Italy only to find that Ambrose has passed away and Rachel is nowhere to be found. Beset by rage, he sets out to find Rachel with vengeance on his mind, but tempers his violent passions considerably when he finds Rachel to be not the evil, torturous shrew he expected but a refined and beautiful woman that he, in turn, falls for.

Du Maurier’s story is basically classy pulp. A talented filmmaker would have known how to elevate its most familiar aspects or pare it down to the potboiler that lives under all the sunhats, tobacco pipes and horseback riding. Unfortunately, Michell’s approach to the material is annoyingly straight-down-the-middle, tweedy BBC-by-way-of-the-WB stodginess only intermittently beset by some funky camerawork. Any savvy viewer will know pretty much how all of this is going to shake down before the end of the first act, and yet the film remains steadfast in its unpeeling of the predictable layers of the familiar onion. It’s the kind of movie where a character’s horrible realization that he’s been wrong all this time happens comically late – long after everyone else has figured it out.

So much of the inherent mystery surrounding the character of Rachel has to do with Philip’s own willful ignorance and blinders that the film requires his perspective to work. Instead, it remains as straight-ahead as humanly possible.

Admittedly, Michell does seem to understand the inherent ridiculousness of some of the film’s mechanics and manages to wring a few laughs out of Philip’s perpetually hapless, lovesick decision-making. My Cousin Rachel falls short of being a stuffy costume drama in the Merchant-Ivory tradition (an undeniable advantage) but the area in which it settles isn’t much better: sort of sub-Downton Abbey in its approach, soapy but also mistaking seriousness for profundity. (Costume dramas are often synonymous with a sort of heightened intellectual sphere – this movie should dispel that quickly and without mercy.)

Both Claflin and Weisz are miscast in their roles. Claflin seems too old to be the wide-eyed innocent he’s purported to be and Weisz seems too demure and reasonable for everything that the film asks her to be. Both are fine actors given little to work with, constricted by the rigidity of the text and the preponderance of scenes of drinking tea, close-ups of teacups and various discussions of tea serving only to highlight the fact that yes, indeed, tea will play a shocking role in this film somewhere down the line. It’s a thriller obsessed with making sure you see it’s thrilling, a romance obsessed with making sure it contains lots of dialogue about romance – everything you need is mentioned, but none of it is actually there.

I found almost nothing to like about My Cousin Rachel, which should logically doom it to being one of the worst films of the year. It isn’t. It can’t even really muster that. My Cousin Rachel is blandly watchable, a forever unspooling nothing of a film that’s difficult to get worked up about. The copy surrounding the film is thick with adjectives like “seductive,” “beguiling” and “passionate,” but the end product has very little resembling those qualities. ■

My Cousin Rachel opens in theatres on Friday, June 9. Watch the trailer here: