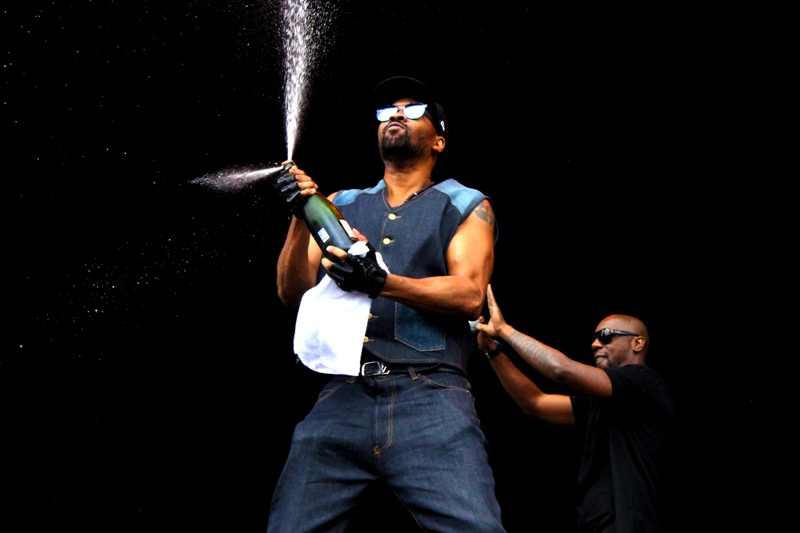 In a reception hall of the luxurious Château Montebello that had been transformed into a media room, I was greeted by a festival publicist along with Jacqueline Marleau, grandmother of Rockfest founder Alex Martel. “I don’t like the music, but I like him,” Marleau says of her descendant’s accomplishments.

I stayed in the building for a couple more hours, sipping free cappuccinos and avoiding the ongoing rain. I was soon taken on a small boat to the main grounds of the 12th annual Montebello Rockfest, a three-day, Québécois style celebration of heavy metal and punk rock culture.

Nothing is more punk rock than: Drinking fancy coffees in an even fancier hotel. 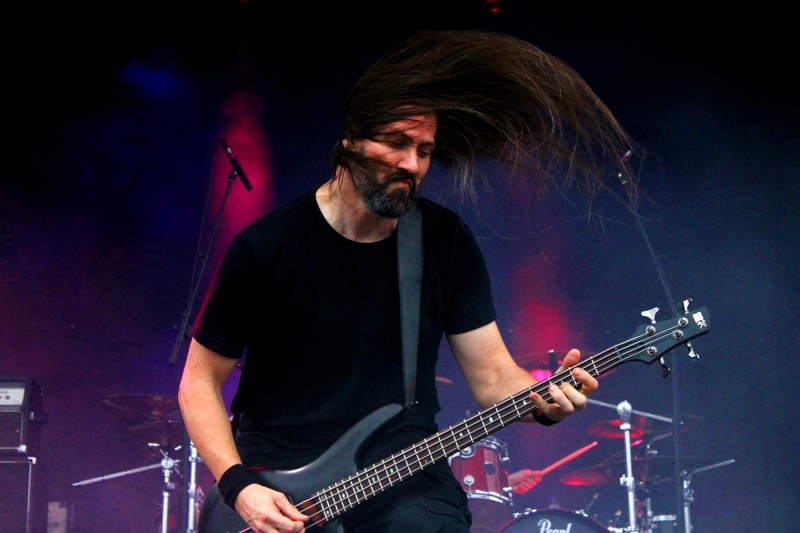 Among one of the more notable local talents playing Friday were these Montreal metalheads, who set the pace for the day with their early Rockfest performance. This was not necessarily even demonstrated by the music itself, but more the overall atmosphere: inconsistent sound levels, crowd surfing madness (at one point, security guards had saved four people within a 20-second span), mosh pits, swearing (tabernac, of course) and an overall sense of liveliness throughout the sea of people in attendance. Although the crowd looked to have been less than 2,000 people, the first three rows alone had enough energy to account for about 4,000.

Nothing is more punk rock than: Juno Award-winners.

As the first act to take the main stage, these death metal heavyweights were surprisingly lackluster. With the exception of drummer Zyon Cavalera (son of lead singer Max), liveliness was lacking from the rest of the band, particularly his totally immobile father. The sloth reflected upon the crowd, their engagement and overall interest being some of the lowest I witnessed throughout the day. Additionally, it seemed as if some of the songs had backing tracks, particularly noted in certain moments with guitars. Such karaoke antics are something I might expect to see from a French Montana concert, but certainly not these Brazilian-American legends.

Nothing is more punk rock than: Phoning it in.

All That Remains seems like the type of group who wasn’t a particularly strong driving force for any attendees, yet something everyone could rock out to once they were in the crowd. The band’s performance delivered what was perhaps some of the most masterful drumming of the day, with member Jason Costa delivering at machine gun speed. Perhaps the overall sound was a bit too whiny for my personal taste, yet such tendencies served as the perfect mood music to fill the angst caused by the lack of pizza in my stomach (this would be fixed shortly after the band’s set ended).

Nothing is more punk rock than: Pizza-fueled teen angst. 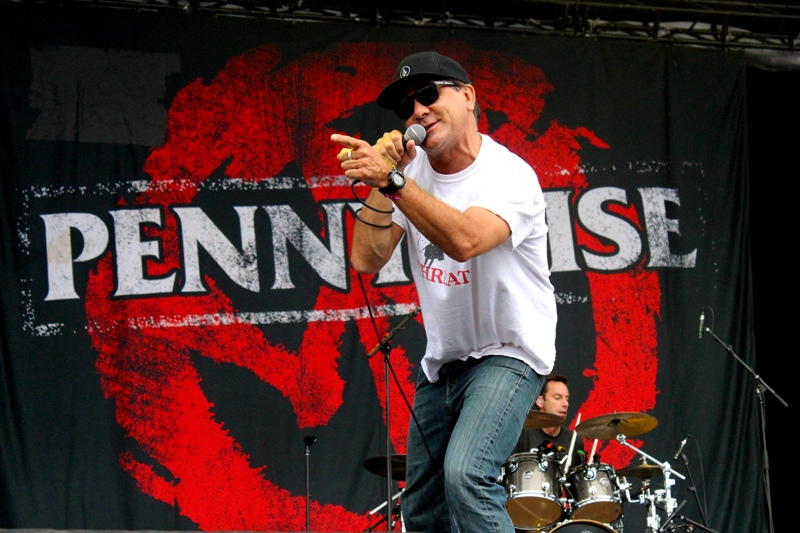 Much like the Stephen King character this band shares a name with, Pennywise are total clowns, only in a far less frightening way. It’s lead singer Jim Lindberg’s dad joke one-liners (such as “We’re from South Quebec,” and “We came all the way to Quebec just to sip on some Mexican beers!” before chugging a Corona) that emphasize the Cali rocker’s carefree aesthetic. The cream of the crop? An eager fan in a giant frank costume dubbed “Hot Dog Man” was invited onstage to rock out and get his collectibles signed. The musical highlight of the show came during a cover of Beastie Boys’ “(You Gotta) Fight for Your Right (to Party!),” which transitioned into the band’s self-titled hit.

Nothing is more punk rock than: Giant hot dog humans.

Serving as the only hip hop act of the entire festival, the Wu definitely brought the ruckus for their hour-long set. Running through rap-along hits of their classic first two albums, along with posse cuts off of early solo projects was a surefire way to have the entire audience throwing their W’s up. However, the absence of integral member Method Man was felt, his illuminated energy forever elevating their performances. 20 years after opening for Rage Against the Machine on a controversial arena tour, Raekwon, RZA and company prove that they still have no issues winning over any type of crowd.

Nothing is more punk rock than: Being nuthing ta fuck wit’.

Is it weird that I was just as excited to see the almighty Wu-Tang Clan as I was to see a kid my age who is essentially a “living meme”? Is suing comedian Mike Ward to blame for the relatively small size of his crowd? In any case, this polarizing performance managed to draw in a dedicated bunch watching the 20 year-old in action, including a handful of googly-eyed groupies side-stage. Audience support seemed genuine, yet it was a performance that none were taking particularly seriously in terms of critique. Luckily for Jérémy, he was nowhere near the worst the day would bring.

Nothing is more punk rock than: Jeremy screaming “Fuck yeah!” in a deep metal voice, following the song with a “Merci” in his normal, squeaky speaking voice. 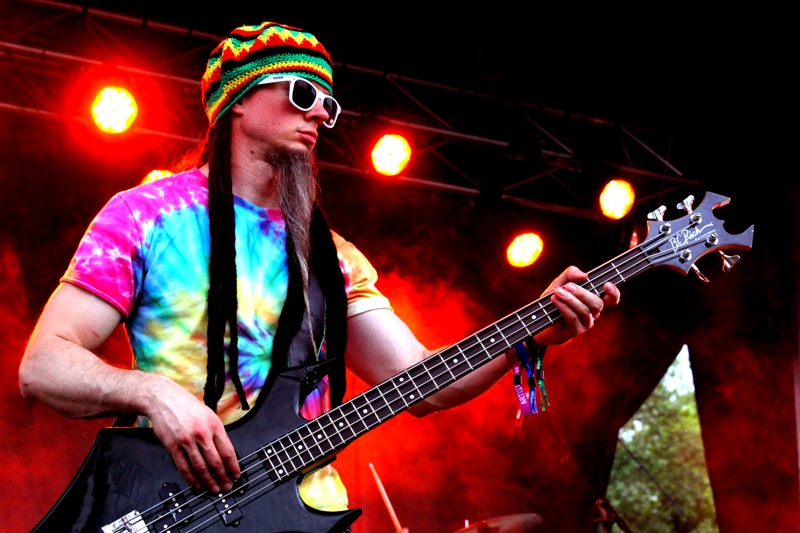 Groups like Bob Marley Experience is a prime example of why white people are the absolute worst. Stemming from this very province, these “Crazy Baldheads” were a hot mess. Whether their ridiculously unfocused outfits (their guitarist sporting a tie-dye shirt, Rich Warlock guitar and 10-inch goatee) or borderline racist vocal impersonations, the only strong point of this performance was when I decided to leave it early. A reggae band certainly has the potential to work well at Rockfest, just not under such ridiculous circumstances as was seen Friday evening.

Nothing is more punk rock than: Cultural appropriation?

Just prior to the sun setting, futuristic rockers AFI took the main stage to perform a healthy mix of essentials and new cuts. Dressed in sleek leather jackets, the band brought a sound far more pop-esque than many of the acts throughout the day. While perhaps more comparable to the likes of electronic-blenders 30 Seconds to Mars or Linkin Park than some of the more hardcore names that played throughout the day, AFI’s stage presence is still undeniable. It was a nice cool-down in between the heavy madness, and the crowd seemed to enjoy it.

Nothing is more punk rock than: Acceptance.

My day ends at around 7 p.m., meeting my mother in the crowded main street of Montebello to get a lift back to the city. She notifies me that the large dirt stain on the hood of her car is from a muddy furry who decided to hug it some moments ago.

Despite my being both Jewish and anglophone, everyone at Rockfest made me feel quite welcome. This was especially nice to see on St. Jean weekend, a holiday heavily associated with Quebec pride and separatist views. People could get rough in a mosh pit or wall of death, but at the end of the day, most attendees found camaraderie in one another with the moments they shared. It was now time for me to go home to get some sleep in a cozy bed — the way a true punk rocker would.

Nothing is more punk rock than: Nice Jewish moms. ■