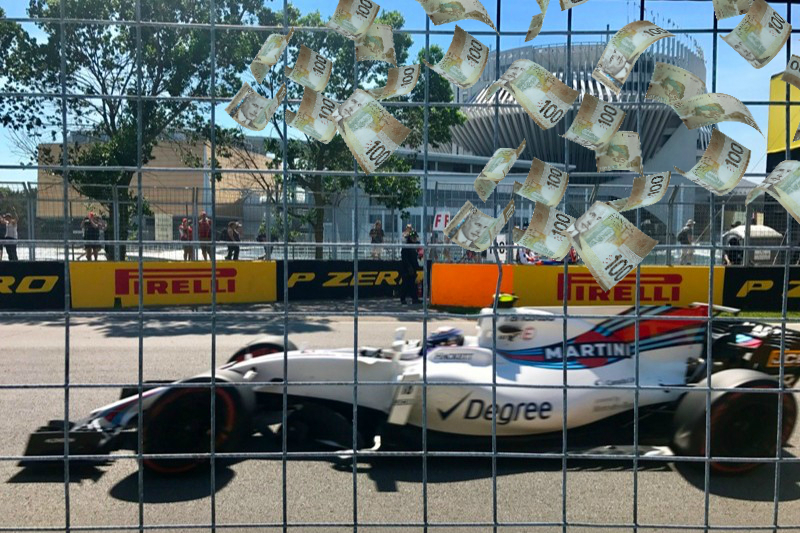 The cash flies away

For years we’ve been told that Montreal Grand Prix brings enormous economic benefits to the city despite the hefty price tag — $18.7-million in subsidies from three levels of government in 2015.

Turns out that’s about $10-million more than the tax benefits, according to a study by the KPMG accounting firm conducted on behalf of the Montreal International Jazz Festival, La Presse reports.

In comparison, the government tax take of Jazz Fest activities — many of which are free to the public — were estimated to be more than double the subsidies, $8.3-million on grants of about $4-million a year.

The study also revealed that the estimated economic impact of the Grand Prix was less than half of what supporters had previously claimed. After the province and the city had agreed to only count people from outside the city who came to Montreal “mainly” for the event in question, the spending on hotels, dining out, etc. came to $42.4-million for the GP instead of the $89-million in previous estimates.

Using the same criteria, the Jazz Fest attracted a little less spending — $39.1-million, over a longer period (11 days vs. 3) — but if you subtract the net subsidies for both events, the Jazz Fest is the clear winner, especially since the only free F1 activities involve ogling on Crescent Street.

At least now we’ll be spared the indignity of watching our politicians get on their knees to beg F1 owners to return, at least for the next 12 years. All it took was $100-million from Ottawa, Quebec and the city, plus another $18-million for improvements to the track, to guarantee the annual celebration of excess will continue until 2029.

Montreal is an amazing place to visit at any time of year, but there’s little doubt that our short summers have led us to pack in an incredible number of festivals of all sorts between May and September.

Many of these events have significant public components, from Mural Fest to the FrancoFolies, Jazz Fest, Just for Laughs, fireworks competition, Circus Festival, Folk Fest on the Canal and Montreal Pride festivities. Others, like the Fringe Fest and Piknic Électronik, offer alternative entertainment at low cost.

Most of these celebrations get bigger and better every year and, as their fame grows, so do the crowds. Mural Fest combined with the St-Laurent street sale now rivals the Grand Prix for attracting crowds and the contrast could hardly be greater, with one pulling in people of all ages and nurturing art and a plethora of local business, the other filling a handful of bars with worshippers from the cult of cars.

Now that we know that the GP costs the government more than it brings in, we should stop being afraid of letting this elitist and anachronistic event depart our shores and go rip off some other city. We’ve got 12 years to watch $100-million of our public money circle the drain while we plan for its replacement.

The Formula E, which uses public streets and cars that promote clean energy technology, seems like a logical replacement. And you can safely bet the price to host this event is a lot less than $20-million a year. ■